After about four years of trying, we were finally passing papers. The old Trustees of the old Cambridge Cooperative Club were welcoming new people onto the trust. I had volunteered, and convinced Dan, one of the other housies, to step up to being a trustee with me. The snow was flying, the slush and salt accumulating at the Porter Sq mall, but we were there, with two current trustees, ready to meet at the bank to have the documents notarized. Finally.

We had been in touch with Litu, one of the trustees who had lived at the house from the mid-80’s to about 1997, for a few years trying to get together for this. He has been very supportive, but things just never quite got together. For the Trust to accept new members, we needed two existing trustees to sign in each new trustee. Litu lives in Cambridge still. Somehow Paul, the one current housie who lived in house in the last century, was in touch with Litu, and had emails for a few other old housemates. All the trustees are former housemates. The current housemates are supposed to be the trustees, but we have a situation where, until today, all the trustees lived outside of the house.

I had been in touch with one of the trustees who lives in Australia, who wanted to be helpful but wasn’t really going to be able to sign anything. Tim, another trustee, would occassionally pass through town from his artist existence in Vermont, but he was hard to get in touch with. Another Trustee, Jennifer, did indeed live in Cambridge, but had expressed interest in actually resigning and was never available. And these folks I had identified after going through a lot of old names on bits of filed paperwork in the house which had turned up as dead end leads.

After numerous attempts to convene, we finally got in touch with another Paul, who had also lived in the house in the early 80’s and was a trustee. He lived in Medford! He came to a house meeting and we caught up; he hadn’t been to the house in 20 years and was thrilled with how things seemed to be doing all right. He had been involved in the last “trustee turnover event” when he had been here, and was happy to help us get things straight again.

So we agreed to get together this Wednesday at 8:30 to get the papers signed to bring in Dan and myself. I was thrilled that we managed to get together and no last-minute winter storm was going to set us back. By nine o’clock, we were done. Next stop: the Registry of Deeds to record it all. 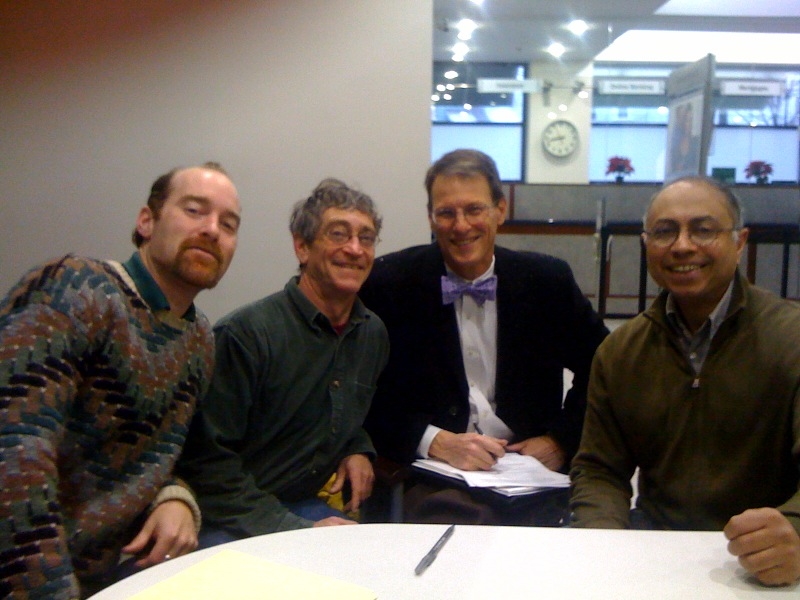