I had a lunch meeting at the Genzyme Building in Kendall Sq, Cambridge. Their cafeteria is at the top, 16th floor or so. I have a colleague on a community service board who works there. It was a great place to have a pre-committee-meeting meeting.Very cool perspectives on the city!

Straight out the back, to the north, is the old Middlesex Third District Courthouse. The Edward J. Sullivan BuildingÂ  (vacant now for two years) – stands at attention. Perhaps more like seeking attention. I read in BisNow that one of the major developers in town was looking at it for a residential conversion. You know, we’re in this “multifamily multifamily” bubble. Funny how the real estate industry loves to fixate. But really, it’s obviously a bit of a rare site – very high density in a neighborhood that will probably never allow such a large building to be built again. At least not for a while. I’d say 20 years. Unless “urban densification” goes wild. 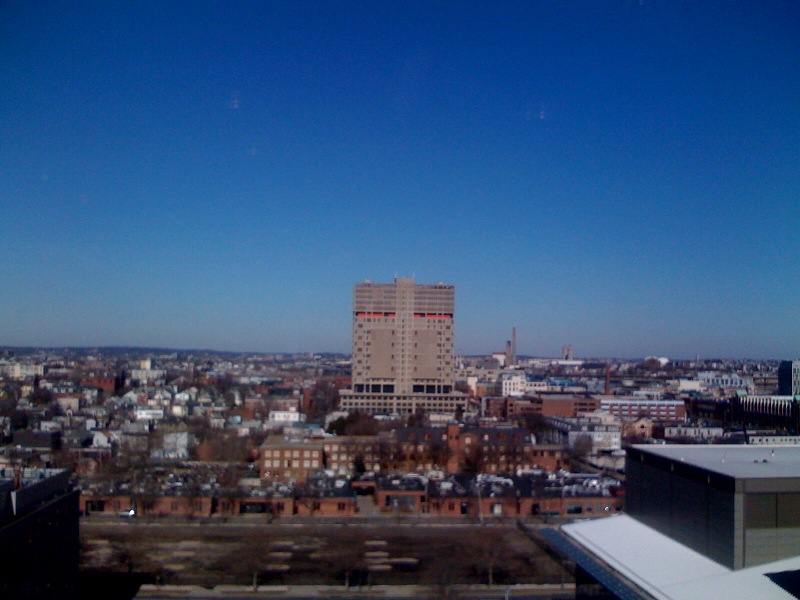 It really is interesting how local rule cities and towns in Massachusetts have held development at bay with various zoning and development payday loan lenders for bad credit impediments. I’m reminded of eating in high-rise cafeterias in other countries. Cities of high-rise apartment buildings. Not so common around here. Who wants to get on that bandwagon? The benefits are multiple: more efficient (carbon and energy) utilization of built structure and infrastructure, transportation efficiencies, spillover effects from socializing, working and tending to families in dense arrangements, induced cooperation and sharing, and perhaps even invigorated democratic activity!

To a certain degree, big office buildings are this high-density urban environment. People spend a lot of time in close proximity. Large office buildings are even more expressive of the city due to the low ratio of personal/private space to public space. Sixteen floors of sidewalk and streetscape. All pedestrian, of course. Do people who spend lots of time in big open buildings behave more or less socially? More or less cooperative or democratic than people in smaller buildings? Now there’s a Grad School of Design thesis to work on! At any rate, folks in the Genzyme building, being all super LEED and open-atrium, have a good thing going. I hope to attend more meetings over there!