It’s time to update the Bottle Bill in Massachusetts. In 1982, the original Bottle Bill was passed to encourage recycling and reduce littering. Each soda and beer bottle or can was given a 5-cent redemption deposit – charged to the consumer at purchase, redeemable at various locations – and bottle waste and litter was diminished.

Now it’s time to update the Bottle Bill – to expand the scheme to all sorts of disposable beverage containers (many which did not exist 30 years ago) and Â increase the handling fee from 2.25 cents to 3 cents. Bottle Bills work and can work better – here’s a great resource, esp. for those states which don’t have any bottle deposit scheme at all

Recently, the Mass State Legislature voted to put the Bottle Bill into a study – the 13th year in a row they’ve done that! Every year this bill is ignored, we unnecessarily throw out the equivalent of a Fenway Park-full of beverage containers! The deposit does create a secondary recycling system, which creates jobs, encourages awareness of waste, and is an immediate boost to all more comprehensive waste-minimization efforts, despite the way the beverage industry frames it as a tax and job risk.

That’s ridiculous! The benefits to the public are numerous, the system works, and we should have an expanded bottle bill. Well, one way it isn’t working is that unclaimed deposits that used to go to the Environment Trust Fund are now going into the General Fund – this should be updated as well! The only reason it’s being held up is that large businesses in the beverage bottling and beverage retail industries are afraid that the fee will reduce sales of their drinks, and their campaign contributions to our legislators are more valuable than the public interest. These legislators should be ashamed of their weak commitment to the public interest. 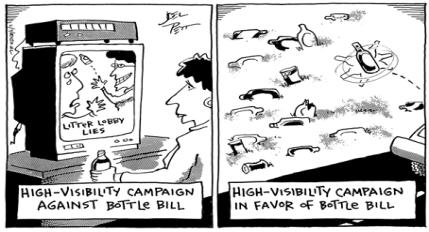 I support the campaign to expand the bottle bill. It’s actually a diminished online casino us slot invaders moolah type of a broader concept I agree with known as “Extended Producer Responsibility.” This is the idea that the creator of a product should have an interest in the total life cycle of the product – from raw materials to post-consumer waste. If you have a phone, the producer should be able to assure you that the materials going into the phone are sustainably and justly procured, that the phone will not cause you harm while you use it, and when you’re done with it, the producer will reclaim the phone and re-utilize the materials in it for further production needs. This puts the onus on safety and recoverability with the designer of the product – the producer.

Considering our industrial systems as an ecology, related to the surrounding “natural” ecology, may help us design products that are less disruptive of the surroundings. We may find the most efficient and profitable products are those that have the least negative effect on the total system. Currently, many producers attempt to provide something to the market, and whatever results from their industrial processes that can’t be sold is just dumped into the surrounding ecosystem – like the pollution from the fossil fuel industry. When materials are accounted for by the entity that uses them, they can’t be foisted on the public at-large.

Bottle Bills are just a start, comprehensive producer responsibility for waste is the end goal. Let’s try to get that 5-cent deposit onto more things, for a start!