So here we are in the old horse barn. The stack, on the right in the photo, has gotten higher and higher as we’ve brought in the larger fields. A couple of weeks ago we had 398 bales from Second Nolte (that’s the field’s name) and got up into the upper rafters (not seen, to the right of this pic). It’s a nice feeling, all that good hay in the loft.

On the left in the picture, where the sun is coming in through the loft door, is a large pile of loose hay. This is the inevitable “rebale” pile. Carl is there raking it out – sending it down to to the ground below. On this day we’ve brought the baler up to the barn to re-package the loose stuff into new bales. It gets loose over the course of the year as the girls who are taking bales down to their horses tend to tug on the bales the wrong way from time to time. Sometimes a bale will blow just as it comes into the loft – or while getting chucked upward. The internal tension, when unbalanced across the two loops of twine holding it all together, cause a bale explosion and the stuffed straw pops out all over. It’s quite a sight when these things fly apart “Whoops!” boing- hay is suddenly everywhere. Loose, it’s unweildy, and so tends not to be taken down to the stalls. So up in the loft, there’s a lot of this loose stuff. As we built the pile, we shoved it around, eventually herding it all toward the front. Today it went out to the baler. 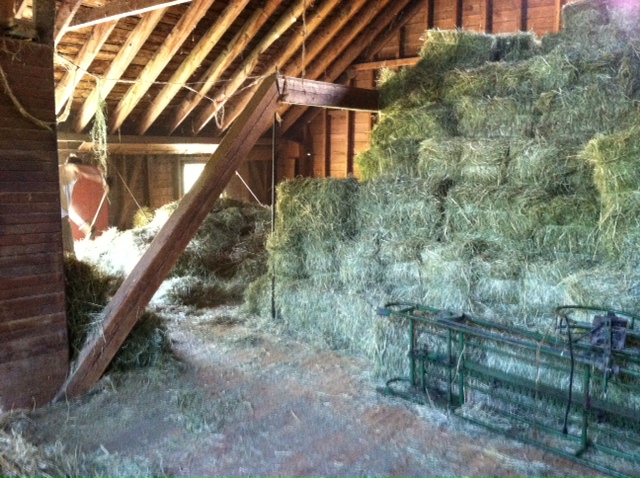 The metal contraption on the lower right is the conveyor which brings bales up from the wagon below into the loft after we’ve collected off the fields. 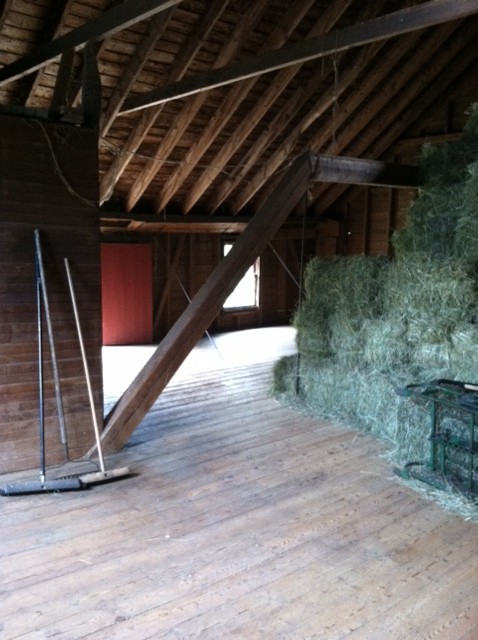 While Carl wrapped up the baling and went out to tedd Livermore, I took the opportunity to rake out and then actually broom sweep the loft a bit. It is lovely to have a clean floor once a year in there. Then, we filled it up the next day with another 250 bales. 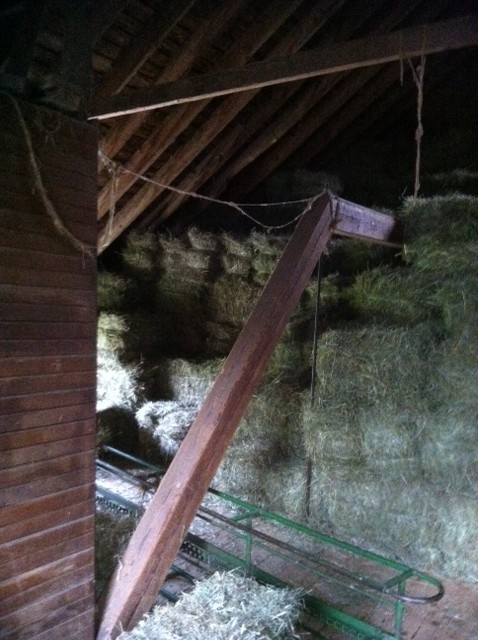 Yeah, we packed that little corner right up. You can see the first five tiers pretty well, but toward the rear, the south wall, I went up another three layers. Luckily it wasn’t too hot in there, even though it’s always about ten degrees warmer for each five tiers you go up. Quite a feeling when you come down from the stack – even if it’s still 90F, it feels about 60 on account of the difference. But those super hot days will be later in the season, during the second cutting. I can’t wait!