Ever since my first Plant & Soil Science class at UVM, sometime in the mid-90Â´s, IÂ´ve had a very important friend in Brazil.

Everyone here knows him as Â´DidaÂ´- though the folks at the Gund Institute for Ecological Economics (in Vermont) would probably not be sure who that is. To most academics, he is Abdon. When I was an undergrad, he was working on his masters in agronomy, specifically in rotational pasture management, and I was doing the environmental studies thing. His advisor, Bill Murphy, actually was in the Peace Corps in Brazil, so thereÂ´s a few overlapping connections. At some point we all were talking Portuguese. I heard all about this magical island he came from: Santa Catarina.

Back in 1997 I had planned a trip to Brazil and since we were friends, as soon as he heard about it he started telling me about his family who would love to receive me. Actually, this would have been his wife, ZilÃ¡Â´s family. She had about ten brothers and sisters.

To make a long story short, I had planned on stopping by Santa Catarina (the city upon the island is known as Floripa, short for Florianopolis – Florian being some big wig from the past) for a long weekend on my way further north from my standard base in Brazil, Porto Alegre (my old high school exchange student scene). Since the island is enchanted and home to a type of sorceress, I wound up getting stuck on the island for a month. Three of ZilÃ¡Â´s sisters were these Â´bruxasÂ´ and the family welcomed me to stay in their compound in the middle of the island, as well as some of the homes of the scattered siblings. I had a wonderful time on the beaches, hiking, and making a lot of friends. In addition to being enchanted, the island is the adventure sports capital of Brazil.

Well, now, 15 years later, I am returning to this place for the fourth time (I think), and got in touch with Dida about visiting – since he is now here as a professor at the local state university (though they are actually federal). He has always been asking me whether IÂ´d be interested in pursuing a PhD in pasture management…

So I am trying to track him down for a month, to no avail. Finally, I get a message: `Grey, nice to hear from you. I am leaving for the States in a few days. Please come as soon as you can, I will meet you at the bus stationÂ´!!

At the time, IÂ´m about a thousand miles away, near the border with Uruguay (see Â´BAGÃ?` entries here), but IÂ´m psyched ot hear from him. I respond that IÂ´m on my way, but it will take a little while as I need a day to get back to POA, then spend some time with my people there (as I would have been staying longer with them and this is sudden), and then head upcountry to this island.

So then, I donÂ´t hear anything else from him. I write about my plans, when IÂ´m taking the bus, when IÂ´ll get in, all that. No response. But the gears were in motion, I leave Porto Alegre and arrive just as I had written him, hoping that somehow the message got through. One small problem, although we have been corresponding on email, he has never sent his phone number!

ItÂ´s a pleasant enough day, and IÂ´m hanging out at at the bus station, at the taxi line watching the action. I start talking to a guy who turns out to be a Shamanist scholar, very cool stuff. No sign of Dida. I go get a beer in the little kiosk at the station. No sign of Dida. They have wi-fi so IÂ´m fine, just hanging out. ItÂ´s starting to get dark. I email: Hey man, IÂ´m going to head to your parentsÂ´place near the north beach, since I at least know where that is. ThereÂ´s a hostel not too far from there, if necessary. See you soon!Â´ Still no sign of Dida.

When I get there, the tenant at the commercial office in the front of the house has no idea about me – nor about Dida or any plans of his. But he mentions thereÂ´s a little beer kiosk at the beach (a block and a half away) that I could wait at. Brilliant! So I head over there and befriend Daniele, the bartender Capsiplex, and Nelson, the older fella who apparently tends to stop by from time to time. An hour goes by, I stop by the house office again, the guy hasnÂ´t heard from anyone and is heading home for the night. I leave my card and a note about going to the hostel.

I try the Monk Beer, I try the old Antarctica. I have a caju juice. They have wi-fi so when other customers take over and the barman doesnÂ´t want to keep chatting, IÂ´m fine. I send an email – Â´Hey, IÂ´m at the beer kiosk but IÂ´ll head to the hostel in a little while.` Still no sign of Dida. Nelson has come and gone. The owner has come and gone. Daniele has shown me pictures of some nice beaches and we become facebook friends. After a while IÂ  decide, well, itÂ´s time to head to that hostel.

On a lark, I decide to turn toward the house first, to see if anyone has stopped by. Low and behold! I see Pi, his brother on the phone. Abdon steps out Â´Opa! ItÂ´s you! You made it my friend!` and they open the gate. They had been calling my number, the one on the card, and, somehow, I heard it ringing. They also suggested I get a phone chip to use in my phone while in Brazil. I will look into it. For now though, everything was great. Reunion time!

Pi had to run, a lot was going on this weekend. But Dida made sure we prioritized some catching up. First thing was, go into the kitchen and pound a beer. Now we would be ready to stay up late packing and getting his house ready – he had to vacate by the following evening. I was just in time to help with the final push. This is a pic from a bit later that evening, making sure we had a healthy meal in between moving loads of junk. 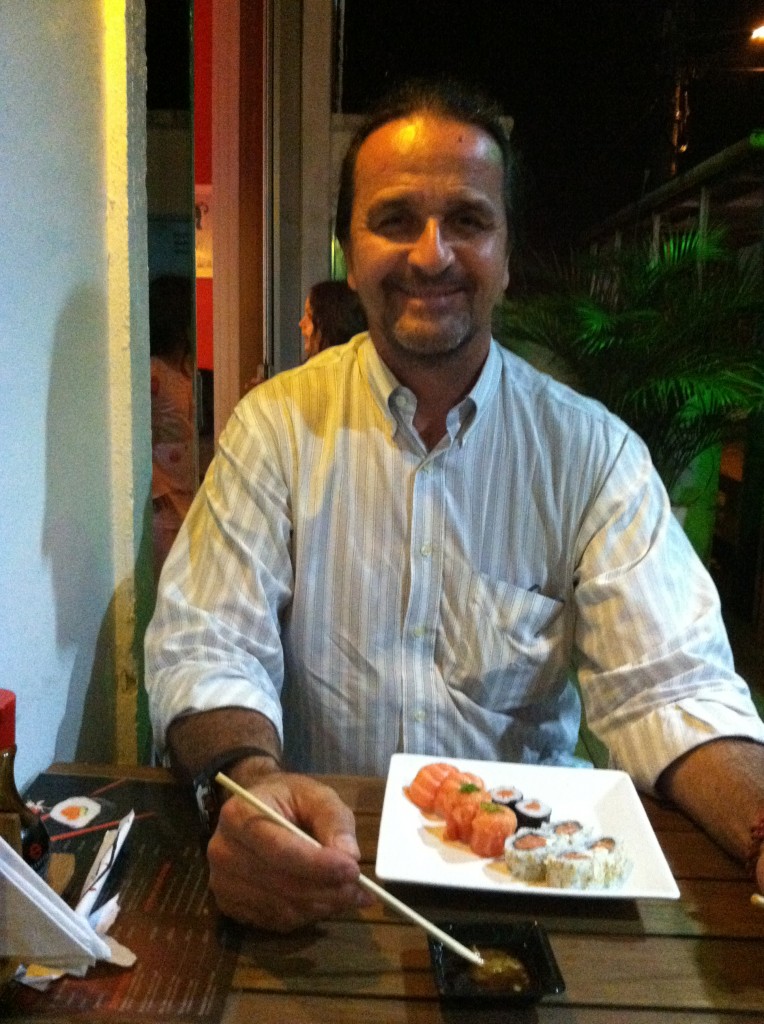 HereÂ´s a picture of the front of his folksÂ´house – from later on Sat, since that evening it was completely dark. 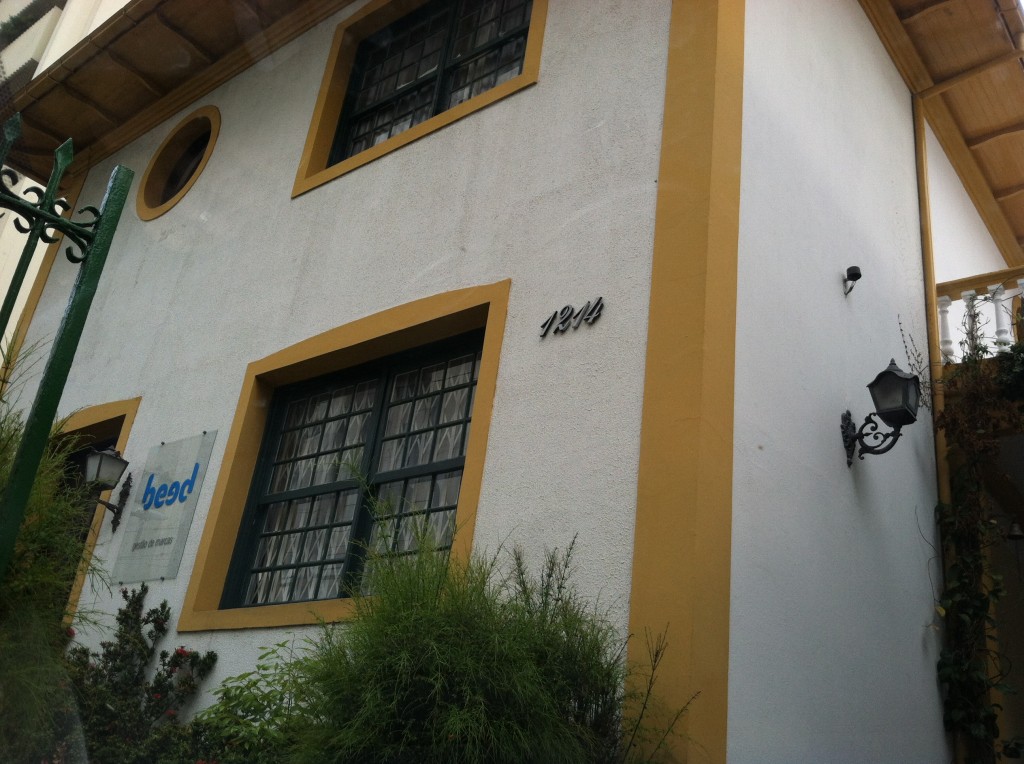 First thing on Sat morning was a MenÂ´s Circle with Rico (here) and his bro PedrÃ£o (took the pic). We made a fire and burned a lot of junk from the yard. Some kind of rare bird came to visit and perch above me, they said it was a good omen. I wonÂ´t go into details but we had a good time starting at dawn talking about the changes going on in our lives and passing the cuia – thatÂ´s the thing in RicoÂ´s hand – an open tea container. The drink is called ChimarrÃ£o, and is the national drink of the south of Brazil. In Argentina they call it MatÃ©. Love it. 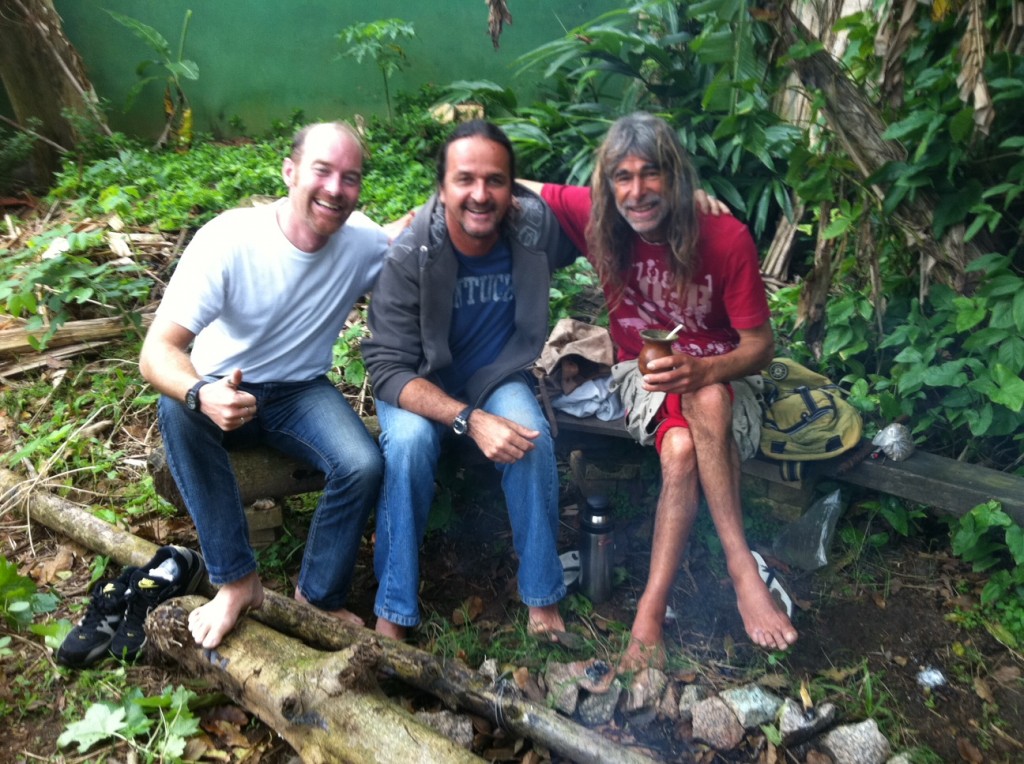 HereÂ´s the front of the house. Nice three bedroom spot, big main room, nothing fancy, but a few dozen meters from the beach of Praia Joaquina / Campeche. 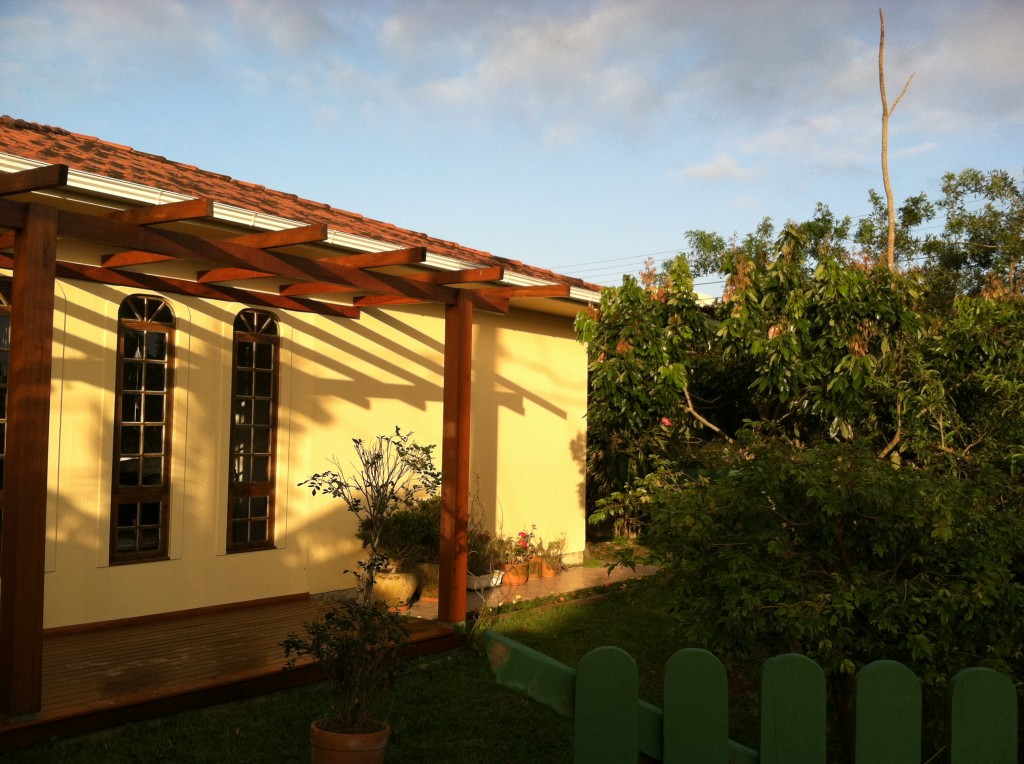 Pi came over later on Sat to help finalize the rental agreement with the neighbors who were going to take over while Dida will be in Vermont. We had fun with the camera. At this point we were technically slap-happy, right! 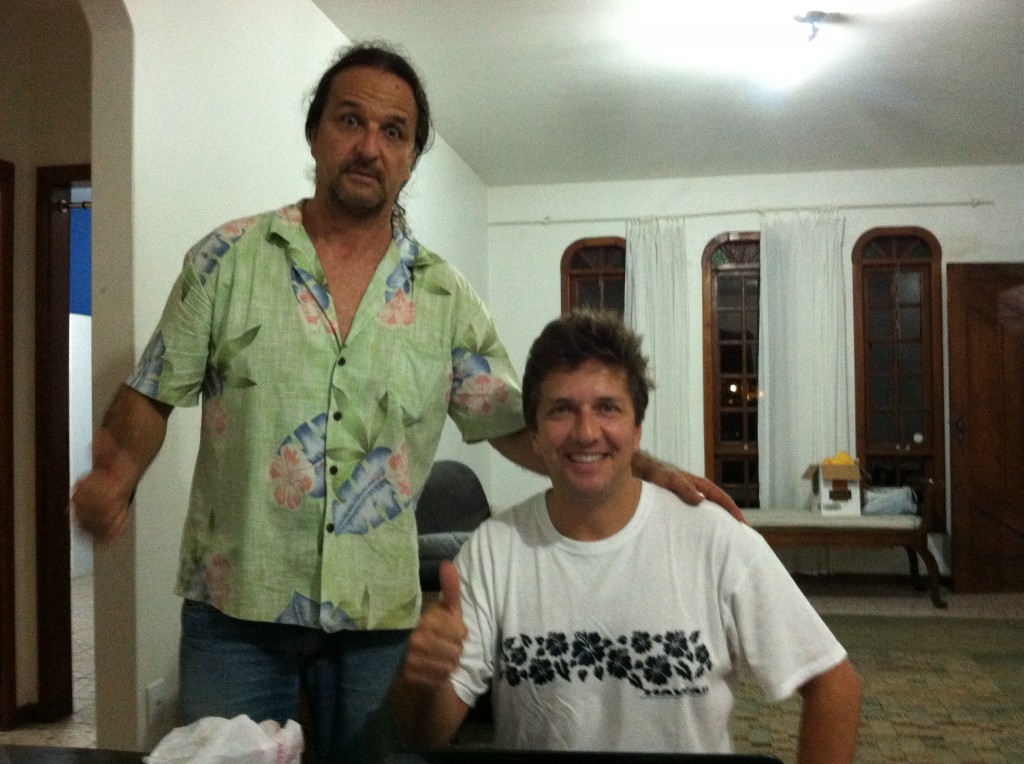 Yet we still had to make another trip to the parentsÂ´place to drop off more stuff. I think I drove around the island five times in the one day. Actually, it was quite nice to do some driving. Usually I get around on busses here. And driving Brazilian style is seriously like a video game. And I thought the Moroccan vector-respect was significant. Here, itÂ´s seriously formula one! 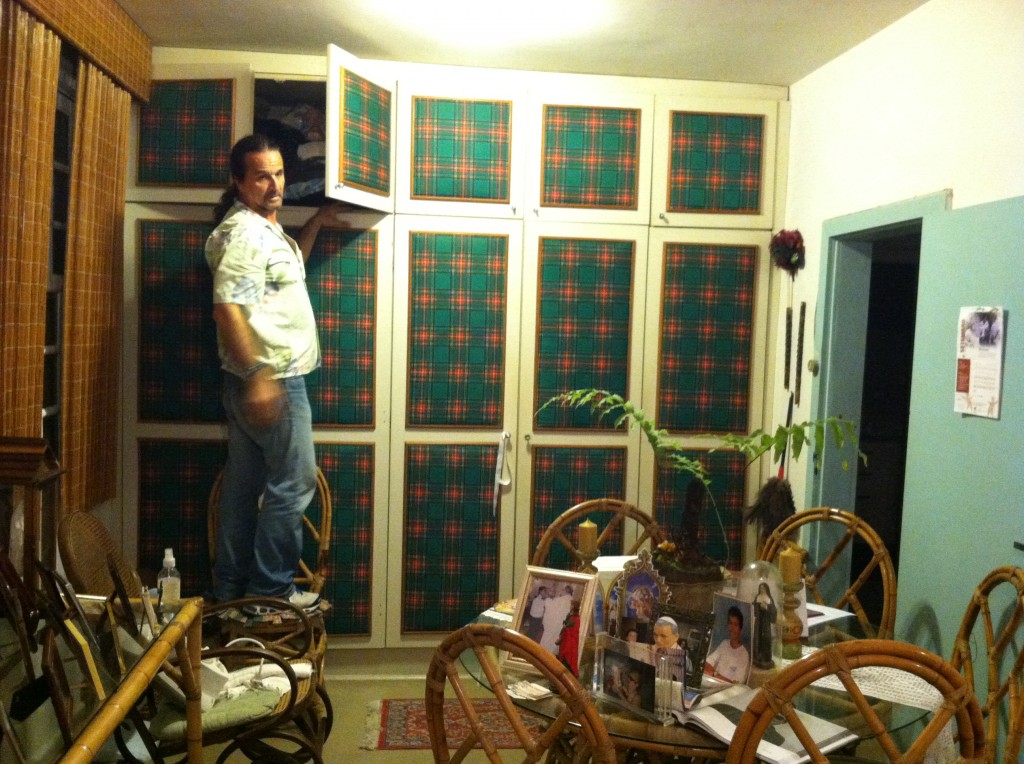 Late on Sat we had gotten out of the house but still had to drop off some things at his office at UFSC. Lots of great books in there! And thanks for the Solutions mag, man. 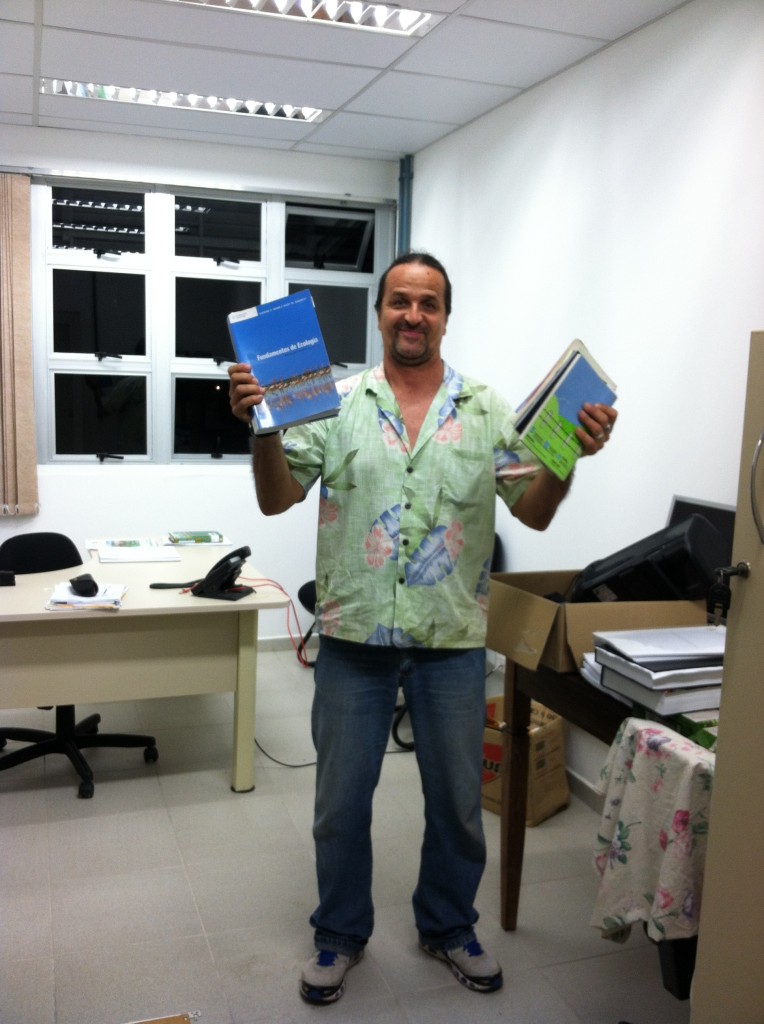 Finally, about midnight, we wrap things up at Pi (and his wife Pa)Â´s place in Campeche. They ordered two boatloads of sushi. It was awesome! Dida had a chance to clean up and we all waited up for him to leave. We stayed up til 4am helping him pack and what not, and by 5 he was ready to go to the airport. It was a really good bonding experience, even if it was rather domestic. I canÂ´t wait to get up to Vermont to see Dida, ZilÃ¡ and their son Lui this fall. I think weÂ´ll have to do some skiing since we didnÂ´t get a chance to do any surfing. Boa viagem Dida!!