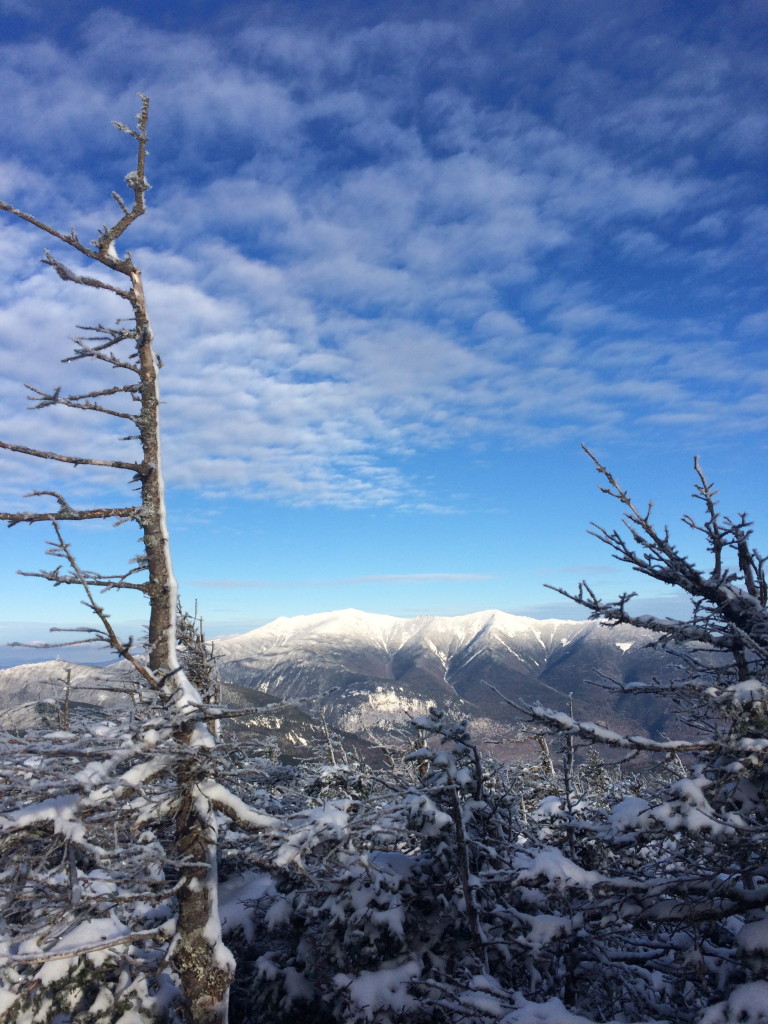 That’s right: we have a new name in the game. The Green Building Mountaineering Club had its inaugural expedition on January 23rd, 2015, heading to Kinsman Pond Shelter in the White Mountain National Forest in New Hampshire. [Above: Lafayette and Lincoln of the Franconia Ridge while heading to the top of North Kinsman]

In the crew were Brig Leland, Greg Bartolini, Ben Myers, Dan Armstrong and myself, Grey Lee. Our fearless leader, Guy Compagnone had to bail at the last minute – literally at 5AM – due to the flu assaulting his family over that preceding night.

He did make it to the muster point in Campton to go over the plan. I can’t believe he took the 4h round-trip drive just to see us off for an hour. Thank you, Guy! 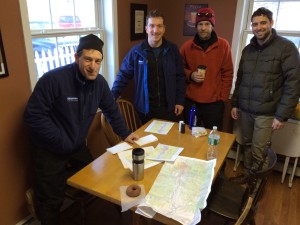 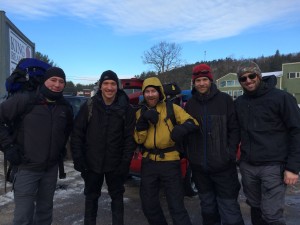 The crew proceeded to the trail head at Lonesome Lake Campground in Franconia Notch. 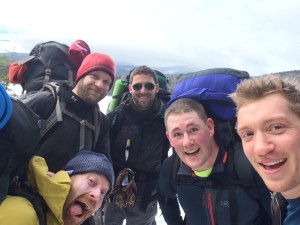 It was decent weather – about 20F and light breezes. Everyone had good gear, having been instructed by Mr. Compagnone repeatedly on what to get. Especially to not bring ANY cotton. No cotton was on the trail for this trip. 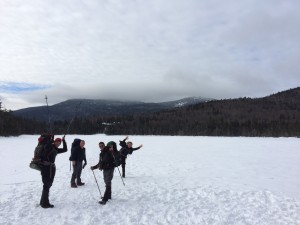 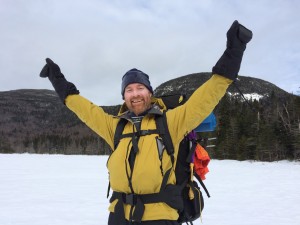 Lonesome Lake is completely frozen. We had fun strolling across. It took us about 1.5h traveling the 1.4mi to get to the hut, though we spent 15 mins horsing around on the lake. The Cannon Balls are to the north (background, above) and the Franconia Ridge to the east. Lonesome Lake Hut is on the west side where we met the caretaker and had a snack.

From there, we continued on the Fishin’ Jimmy trail for just under three hours to get to the Kinsman Pond Shelter. The shelter is a few meters from the pond. We enjoyed the quiet of the frozen pond. No one else came to stay the night. It’s a great shelter. 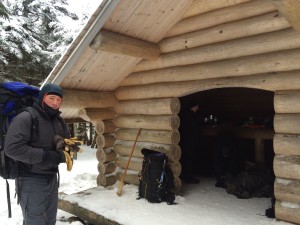 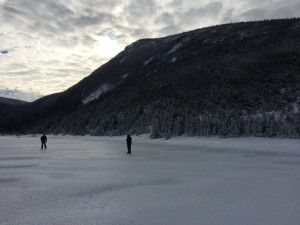 We took another hour to get up to the top of North Kinsman. Below you can see the trail conditions and the vista to the north – into Vermont and Canada. We all had micro-spikes on – the rubberized plastic band with a chain/spike “basket” under your boot soles. We had not brought snowshoes due to the low snow and high traffic pattern anticipated on this expedition, which was fine. 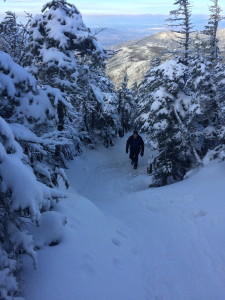 Here’s Ben Myers and Grey Lee with the Lafayette and Lincoln peaks in the background. 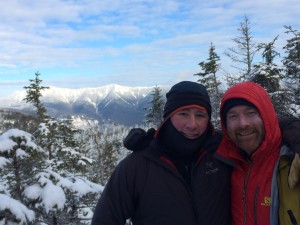 Looking toward North Kinsman on the way up. 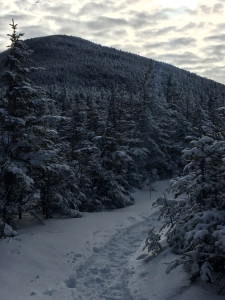 Here’s looking from North Kinsman to the South peak, with Loon Ski Resort in the left background. 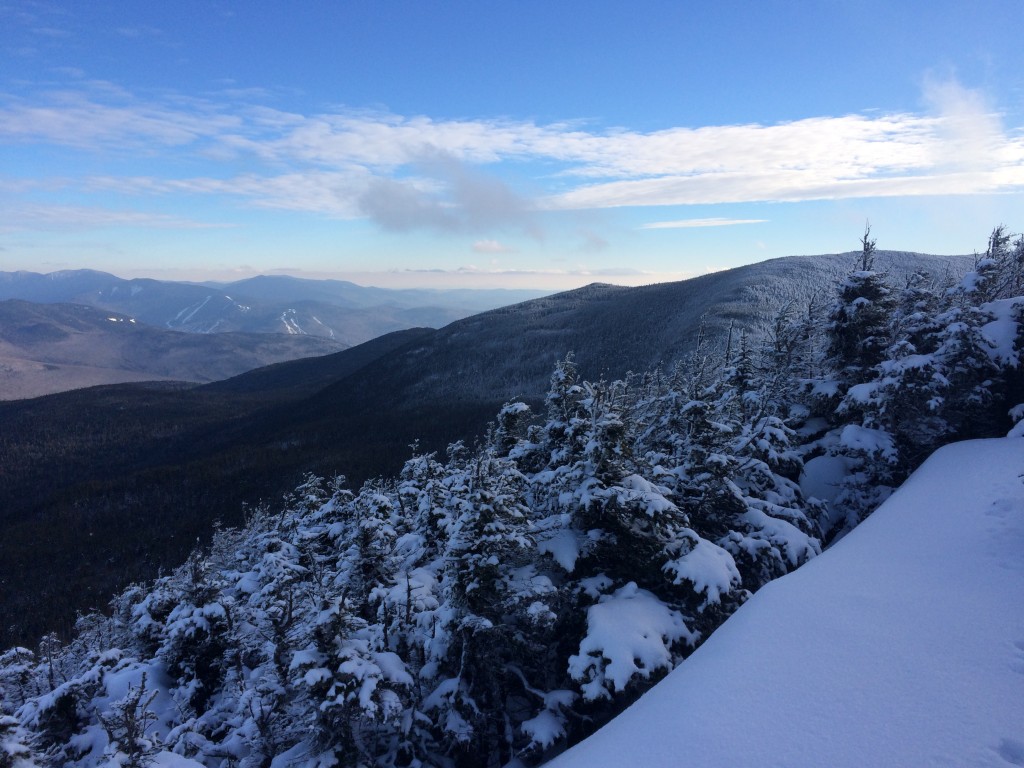 Me with the Franconia Ridge in the background. It was a gorgeous day. 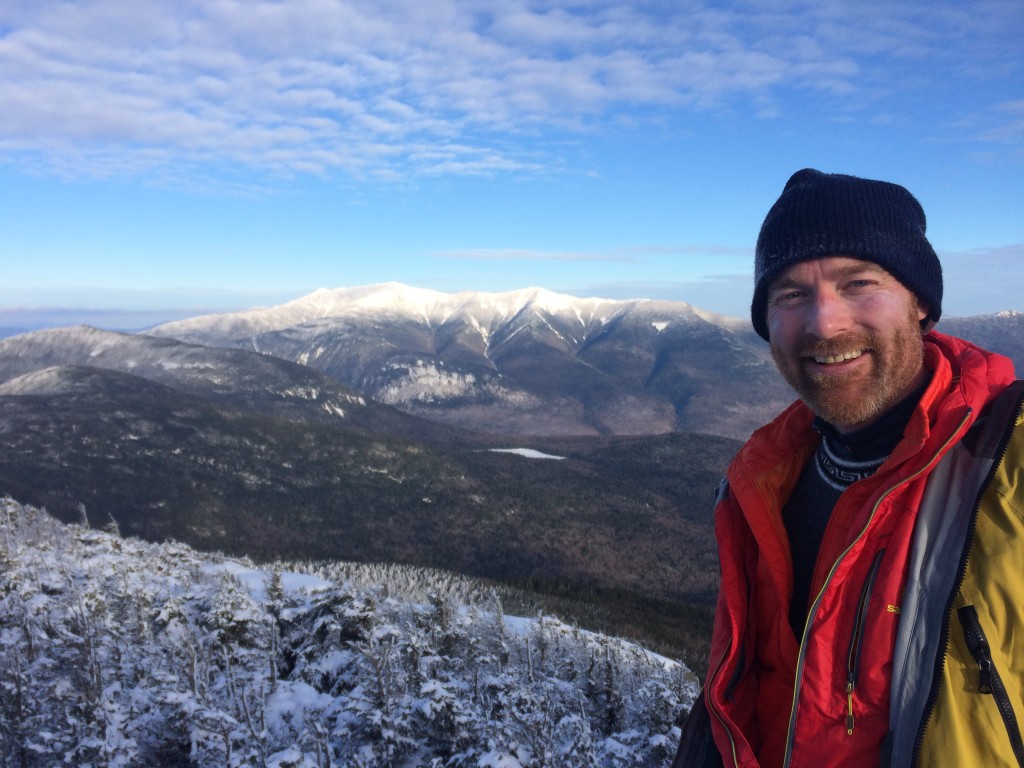 I had been up here with my brother Benny & our dad some years ago. I knew there was a vista that could see the pond. With a bit of a cavalier attitude and one of the crew asking me not to fall off the mountain, I headed into some of the underbrush on an intuitive trail. Scampering somewhat like a four-legged winter creature through the snow and branches, I managed to find a way to a lower ledge of Kinsman North – to see this: 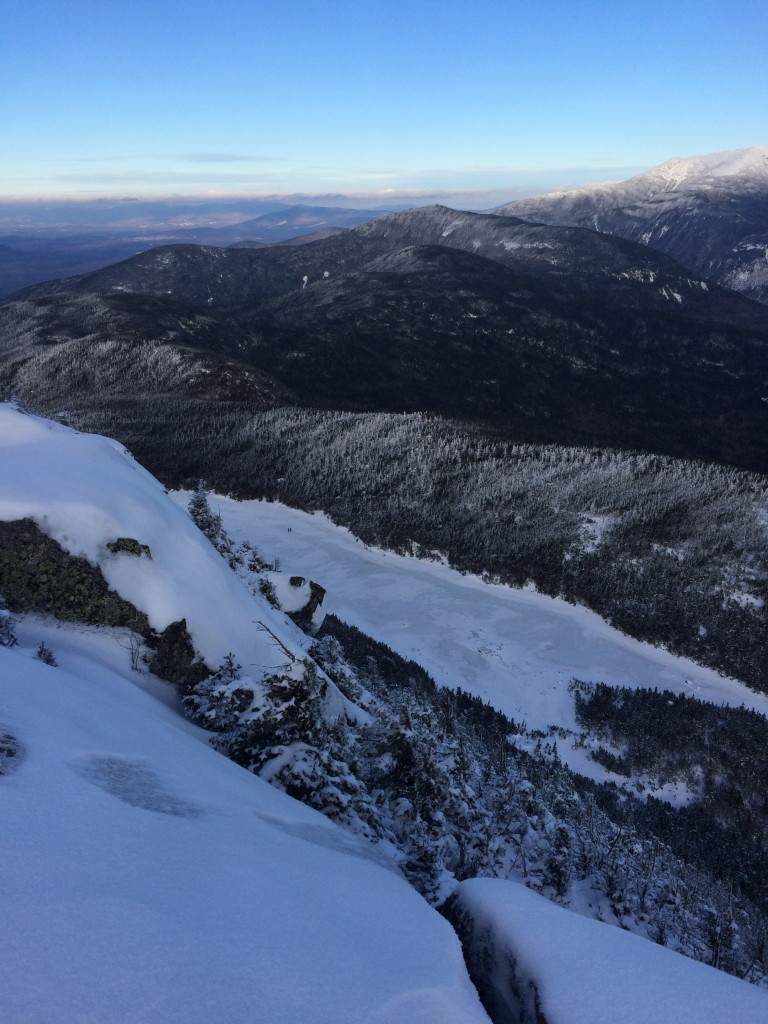 You can see two small dots on the ice – in the upper left of the pond – two of our crew who stayed down there. The other two with me – Brig & Ben – made it through the brush to the ledge here. It was fun to wave to them and hear them shouting back at us. Not that we could really understand them, though.

We headed back to the main trail toward South Kinsman and found this peek of Mt. Moosilauke to the south and perhaps that’s Kearsarge or Sunapee in the far south – can you just see it? 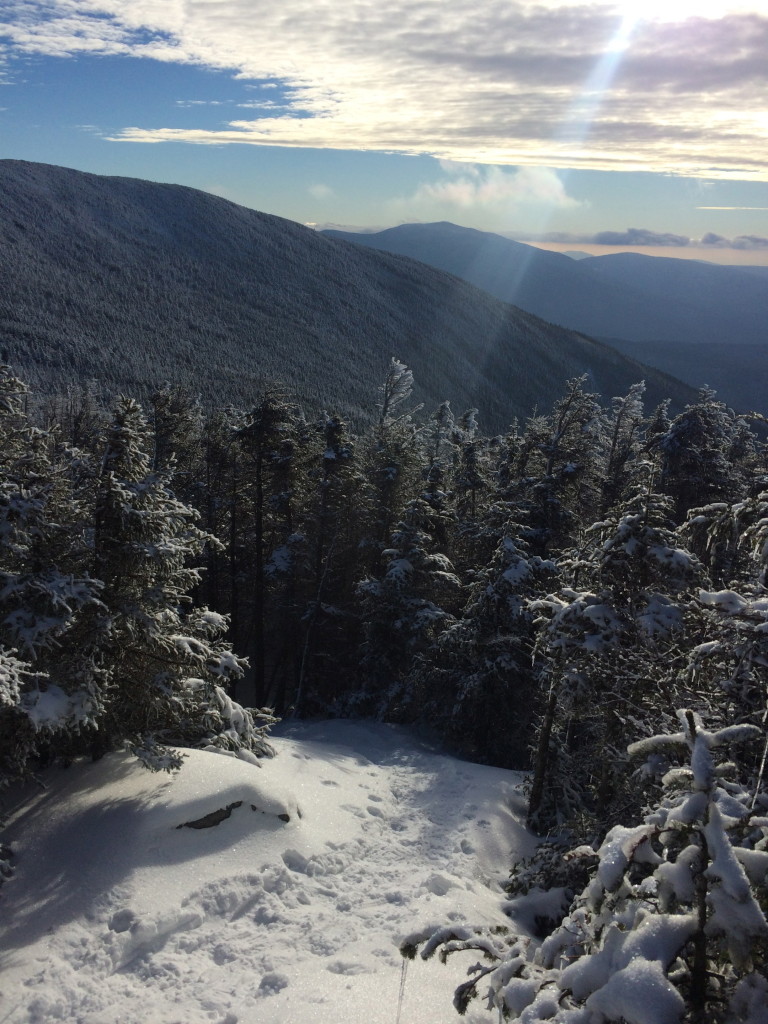 After the summit, we headed back to the shelter for a good dinner at about 4pm. There was a lot of freeze-dried mush, but Dan had brought a steak and I had my trusty omega-3s (sardines), and we all shared. There was some chocolate. There were some flasks passed around. By 5pm we were bundled up and in for the night. We heard a couple of stories about “Worst First Dates” and wrapped up our conversations about the future of the green building industry. There was some snoring. At 1am I went out to the pond for some stargazing and caught a shooter among the constellations. It was brilliant, but pretty cold. About 10F, but still quiet of wind, so not really damn cold, just cold.

We were up at 7am and on the trail by 9. We returned the same Fishin’ Jimmy trail, as the alternative, Kinsman Ridge trail, had only been trekked by one or two snowshoed parties and as we started we were just post-holing, thus changing the plan. At Lonsesome Lake they offered us their excess chocolate chip pancakes which was a real treat. Brig established the strict pull up  record of (uh-oh – I already forgot) 18 (?) for one of us to beat next year. By 11:30 we were down and on the road to grab the real mission of the trip: Burgers & Beers. This is so no one imagines the peak as the goal – if anyone has trouble, and we have to turn back on these expeditions, that is fine as the real mission is…

Here we are at The Common Man (Plymouth) offering a beer to our dear leader Guy Compagnone for having organized such a great trip! 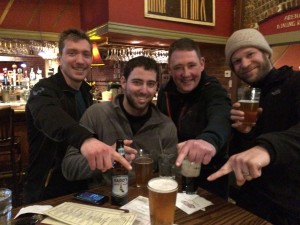 See you in Feb for the Jefferson Assault! (February 20-22 based two nights at Gray Knob Cabin of the Randolph Mountain Club). Stay tuned for the travelogue of that one!

Here is a Flickr Album of the Kinsman trip.