We managed to mobilize an effective crew for the Prezzie Traverse this year. Really glad we got up there! This is the view in departing – heading back from Crawford Notch to try to find some chow after burning a lot of calories. 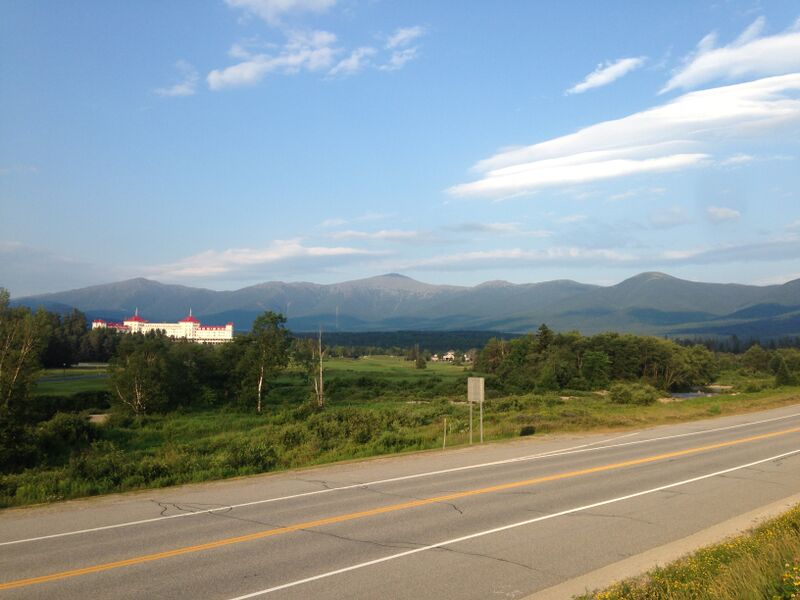 Can’t say I wasn’t happy to be out and about. 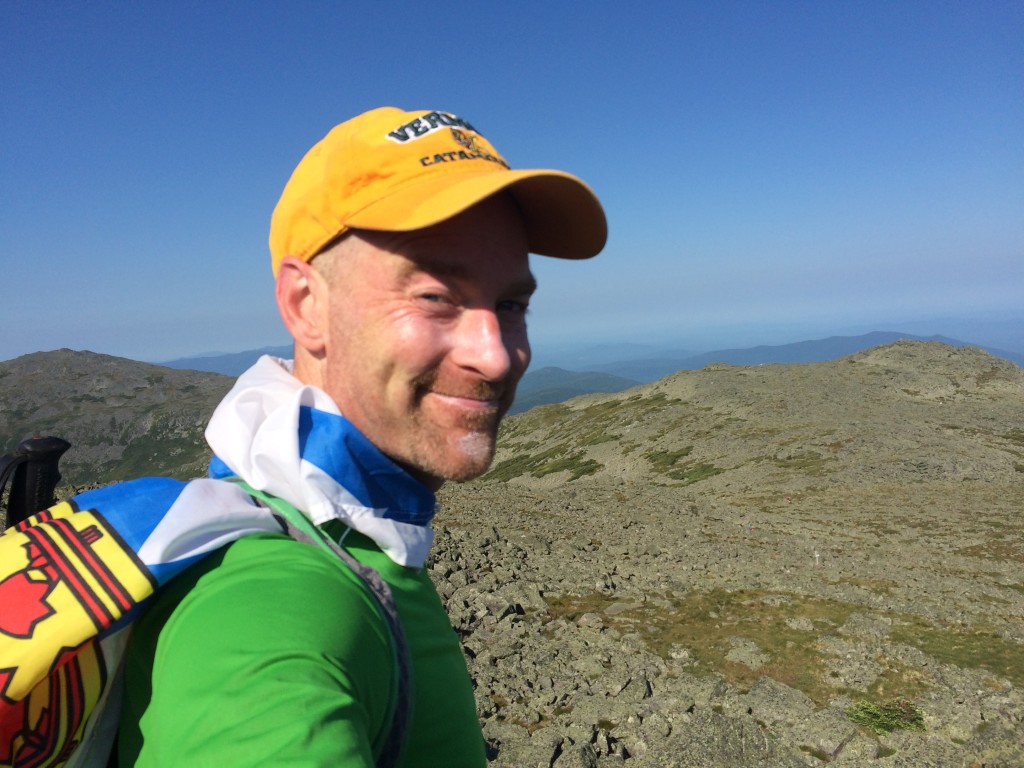 Here is the crew – Grey, Shawn, Brig, Ryan and Andy: [and you can tell what’s in the background] 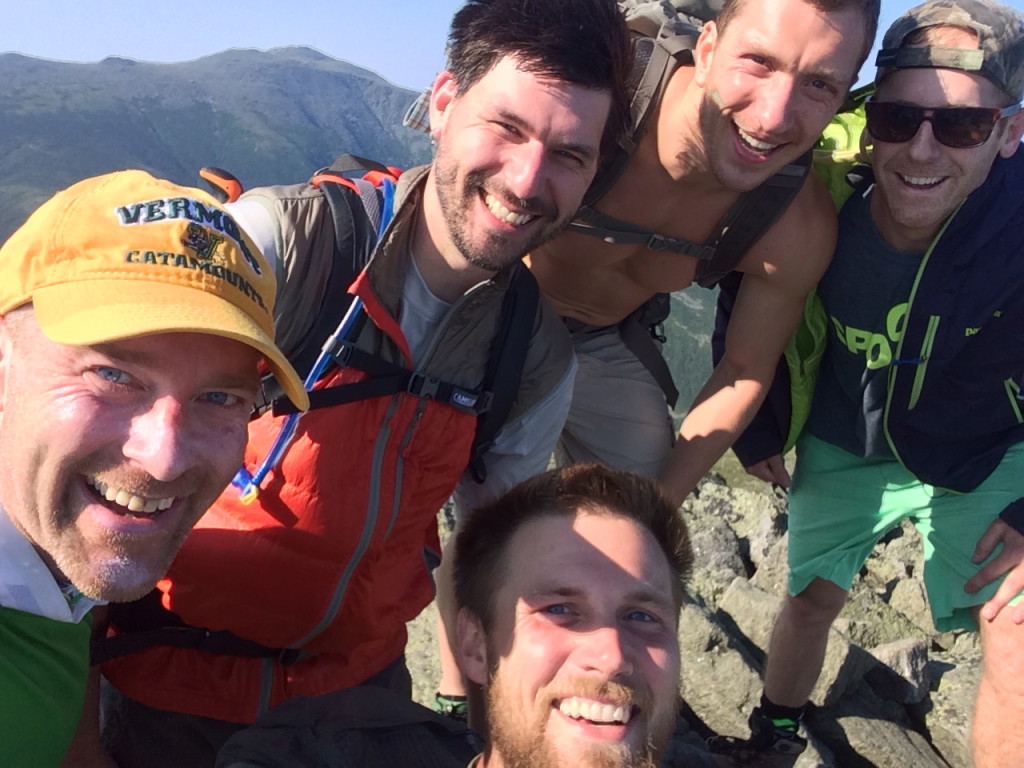 Absolutely a great crew – we got along great and had a lot of fun. Bummer Ethan couldn’t make it but we’ll get him on another one soon!

Brig and I with Jefferson in the background, which we had hiked together in Feb: 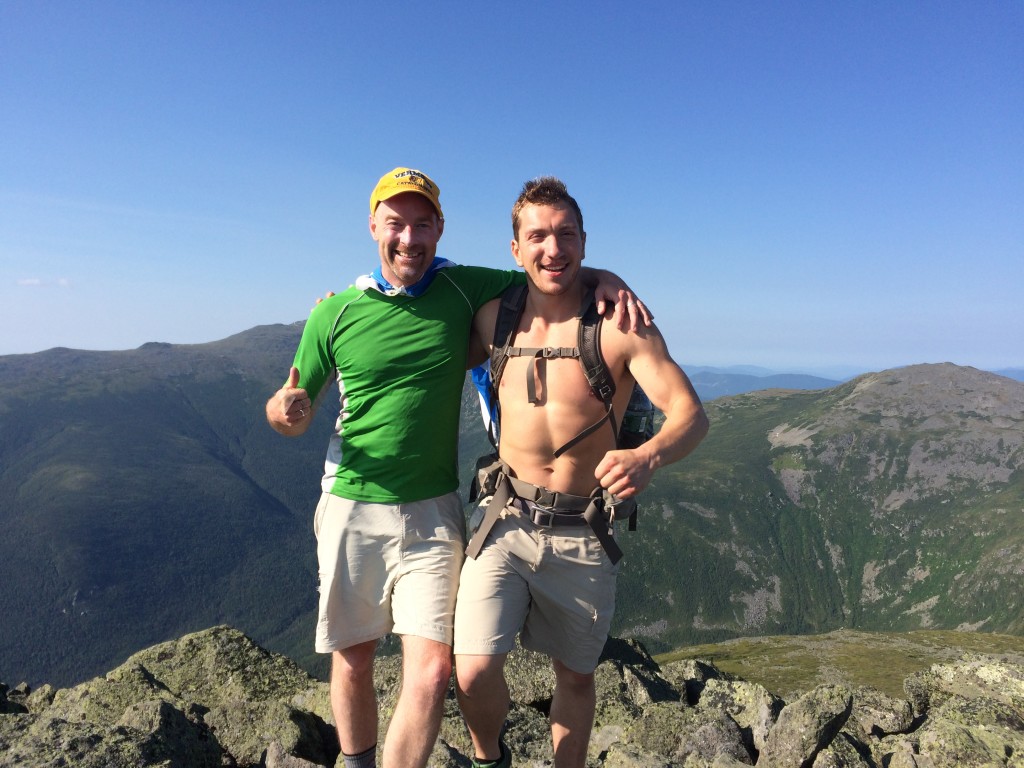 Great day out in the high peaks of New Hampshire! This summit, Adams, is really one of my favorite places in the world A good old landscape friend. 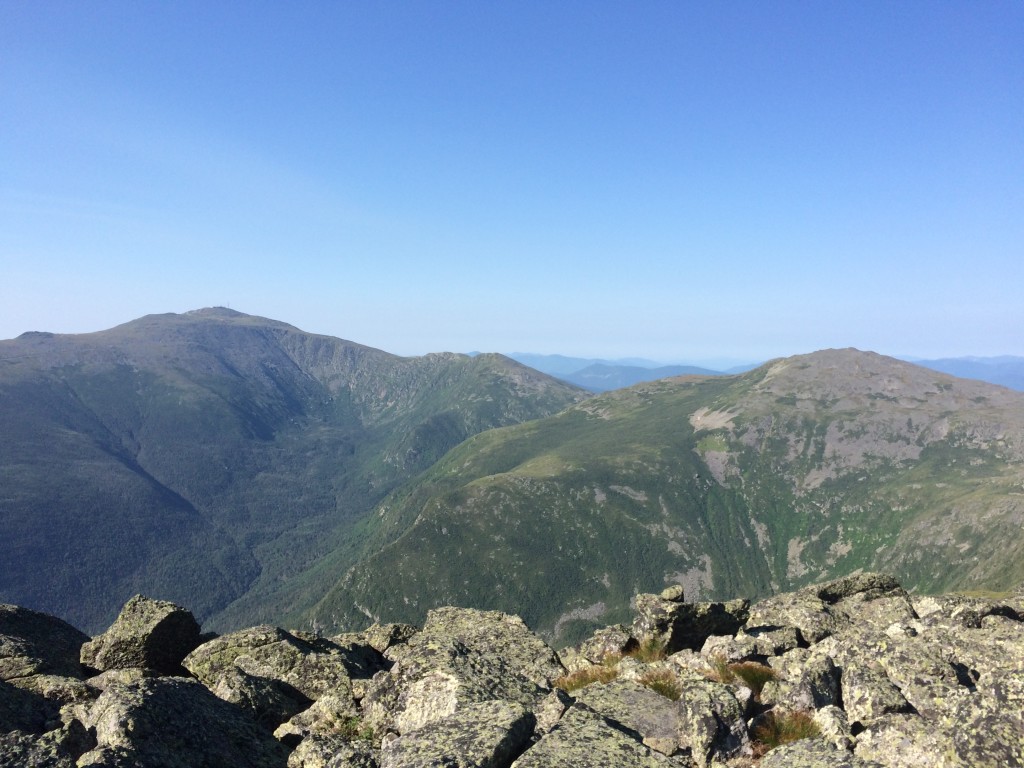 And this is from the top of  Jefferson now – a lovely stroll to get there. You can see a dark spot in the center of the photo. It is a large chunk of rock upright against the decline of the slope. I recall sliding down to it on the crusted snow in Feb and the four of us taking refuge there for a few minutes to clear goggles and check straps and so forth. What a difference a few months make! 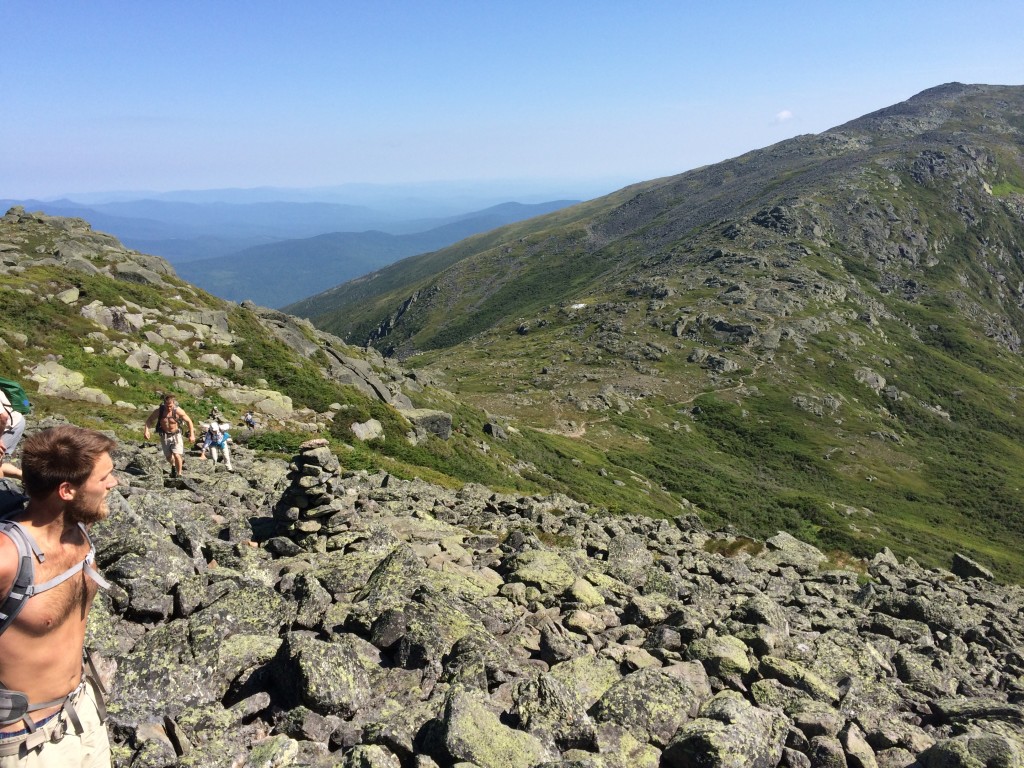 Here’s Brig and Grey at that point on Jefferson where, five months prior, we had huddled up and then issued our wolf-howls and charged the summit in the -70F wind-chill horizontal 90mph driving snow in full winter gear. Yeah. Nicer on this day! 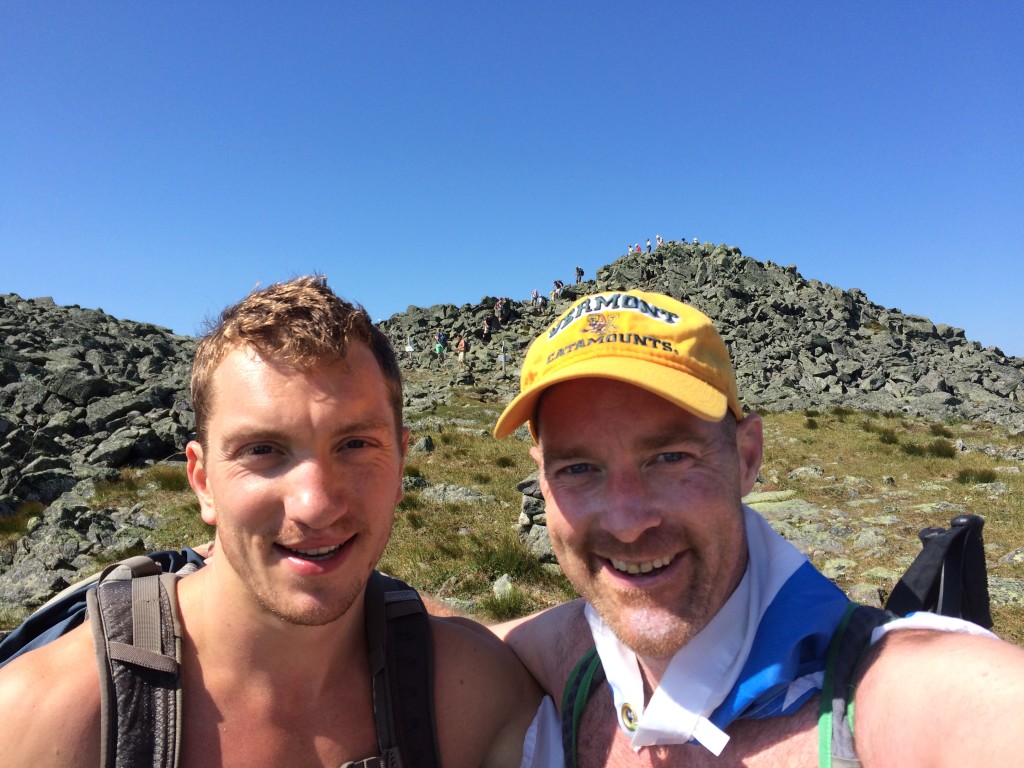 Now, on to Washington – and – the tail of the Prezzies on the right side of this photo – Monroe, Franklin, Eisenhower, and Pierce. 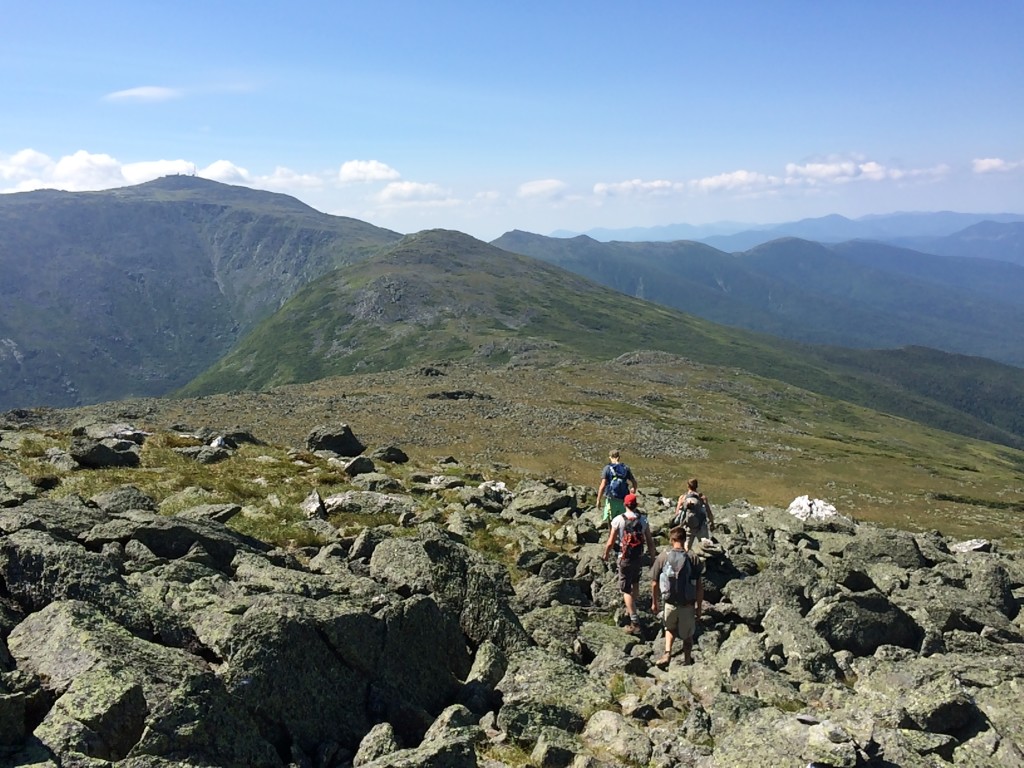 The look back from up on Washington – Clay and Jefferson in the back. Such good places to take your feet! 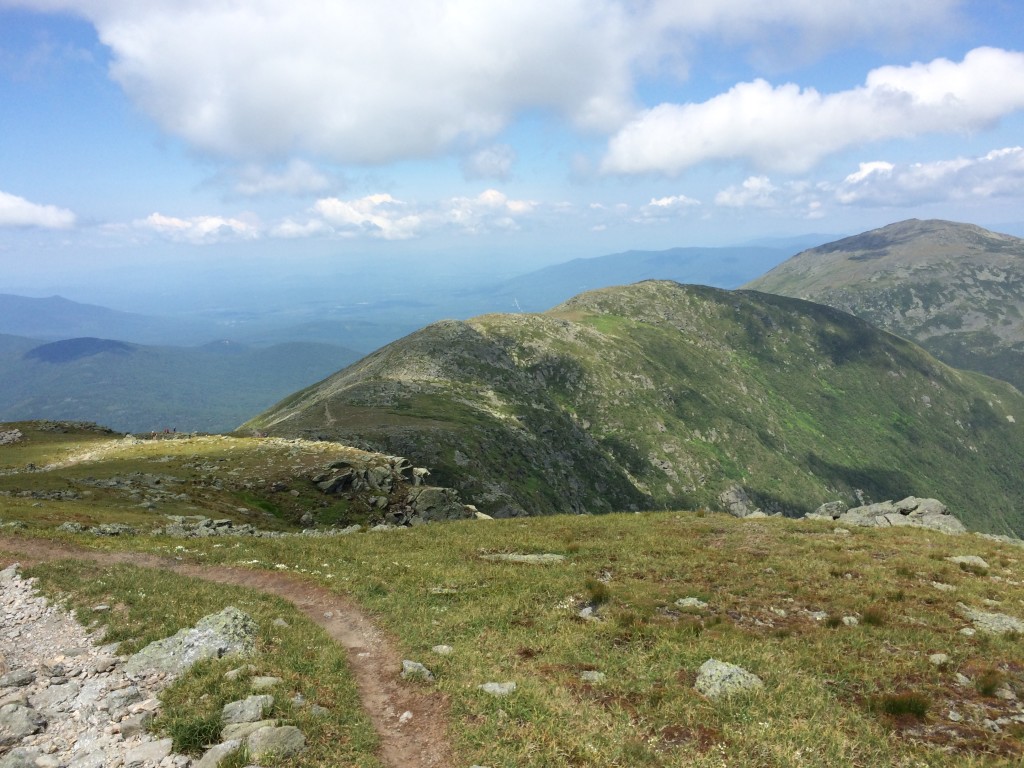 Now from the Summit of Washington. I’m not apt to take it – but Shawn had never done this hike and was like “if I’m going to be out there, and it’s only an extra half hour or 45 mins, I gotta do it” so we did. Totally cool. But so annoying when you get there and 60 people, recently arrived on the cog train, are waiting in line to get their picture at the summit sign and you’ve been hiking for 7 hours to get there. I know we are happier and more intrinsically rewarded, but somehow that positive energy isn’t enough to overcome my distaste at the tourists…I should be more compassionate, I know! 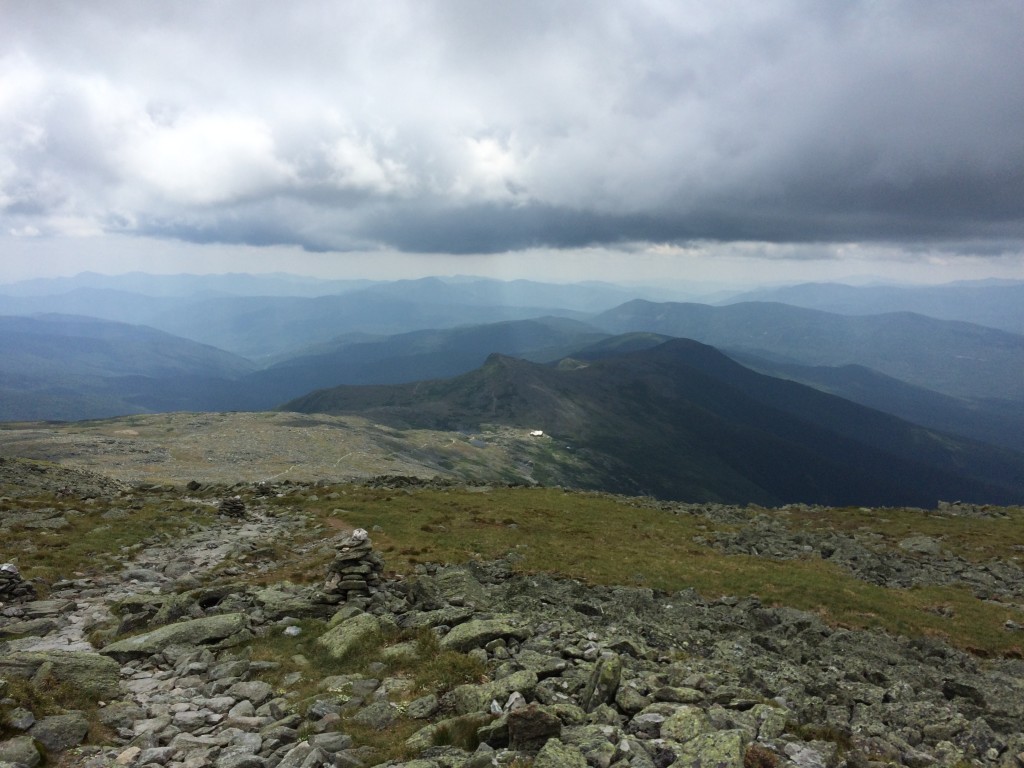 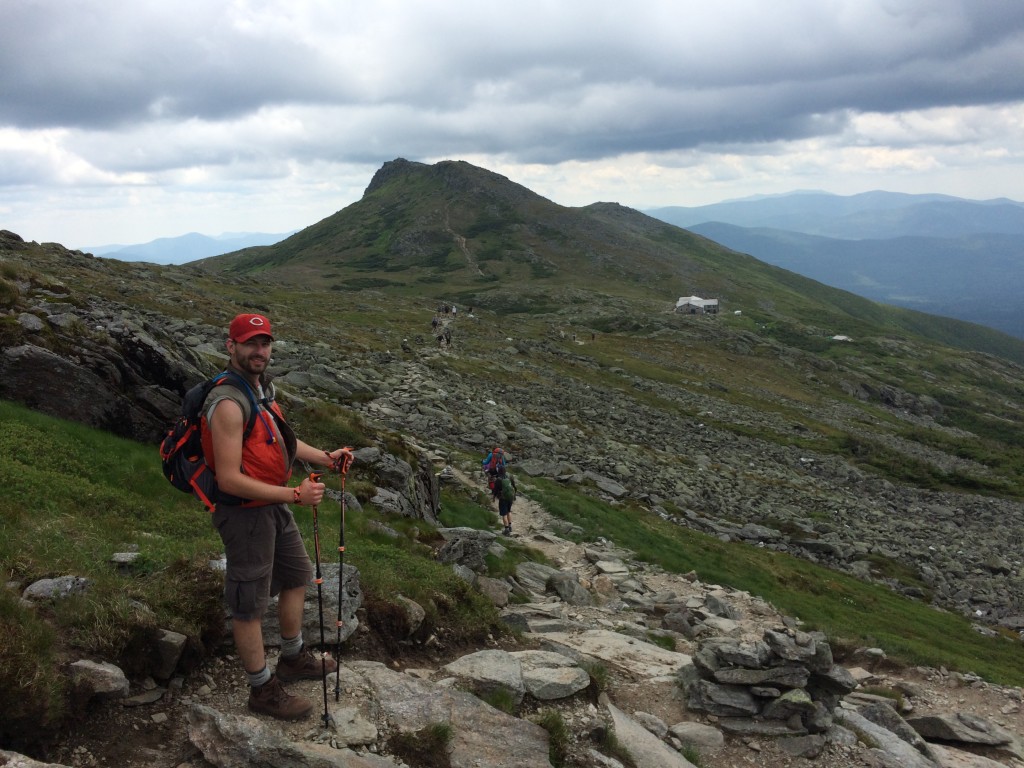 And this is one of the lakes. After a stop at the cabin for water and adjustments, I think my phone died and thus, no pics for the next four hours of the descent. The weather was mixed clouds but never got worse, even got pretty hot and sunny at the last ridge section after Eisenhower. I have to admit that I’ve never felt better or less worn out by a Prezzie Traverse – the Crawford Path down to the Highland Lodge was really not bad. Legs all generally worn but not catching joints. I guess I’m turning out to be a decent hiker! 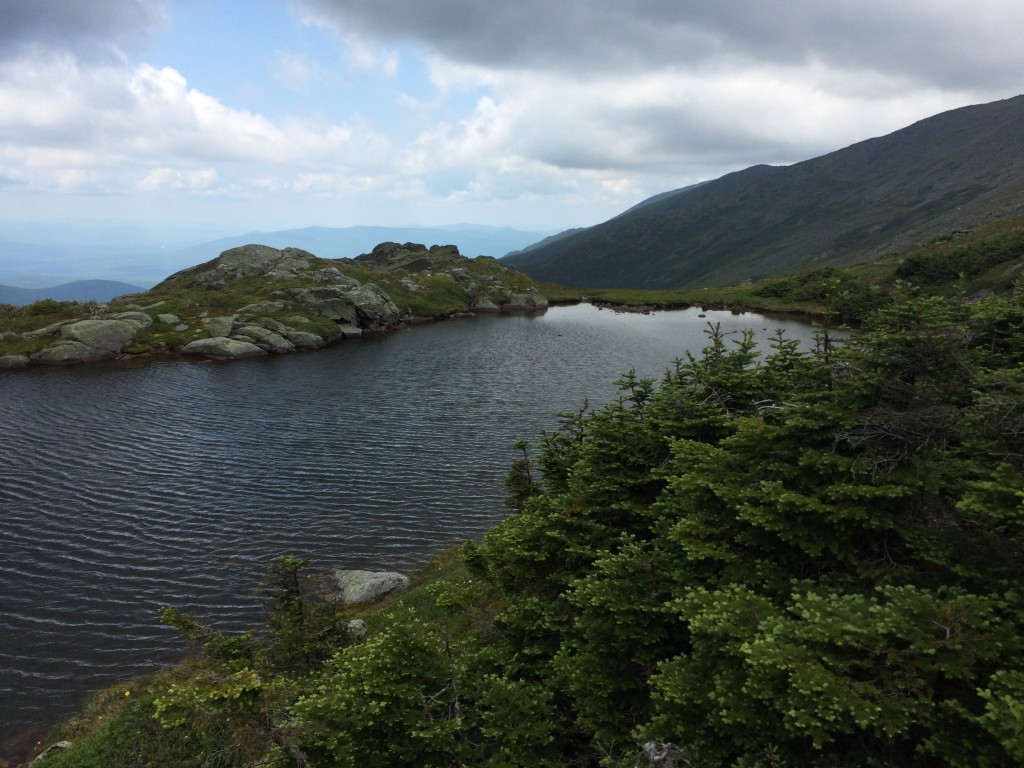 I was pretty psyched at my step count and mileage. Wow! Probably should have tried to break 60,000 steps but I only noticed this the next day after a nice stroll down and grabbing great chow at the old Common Man in Plymouth. Whew – what a hike! 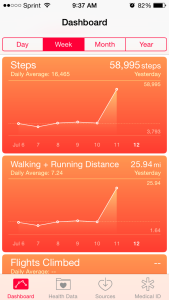 I did want to make sure we got a good shot of Ryan in the travelogue here – this is from when we first broke the treeline on the was up to Madison Hut. It is so gorgous on that Airline trail in the morning! You can just see the top of Adams to the left of his head. And on the far side of the King Ravine behind him, perhaps one of the cabins, Crag Camp, that I have stayed at in the winter.

Thanks for joining us Ryan! Looking forward to the next one! 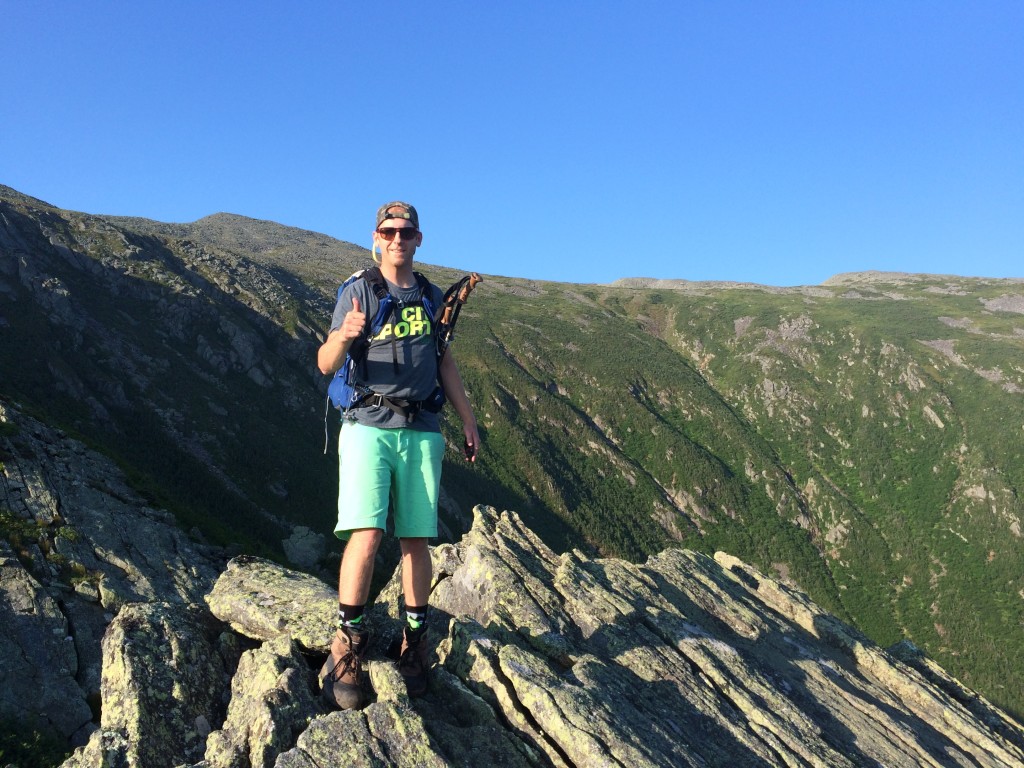