There was this one day, in Austria, when I really fell in love. I’m not talking about the Fraulein from the Gasthof Adler – though my heart did go a-flutter…but…love was in the air for another reason.

It was the smell of HAY!

It was the day we went to the wedding reception of Anu & Marc, up in the mountains of Voralberg. From our base in Feldkirch, I hitched a ride with a delightful pair of guests, Marc’s Hong Kong friend Mar (of Barcelona) and her partner Marc (also Barca). We were heading to Schoppernau, a little village in the middle of nowhere, where we would stay the night after the reception at some hunting lodge even further into nowhere.

It was a gorgeous day, and the sun had been good to the fields this summer. And the grass had grown. And now was time for the local farmers to hit the jam and make the hay come in. 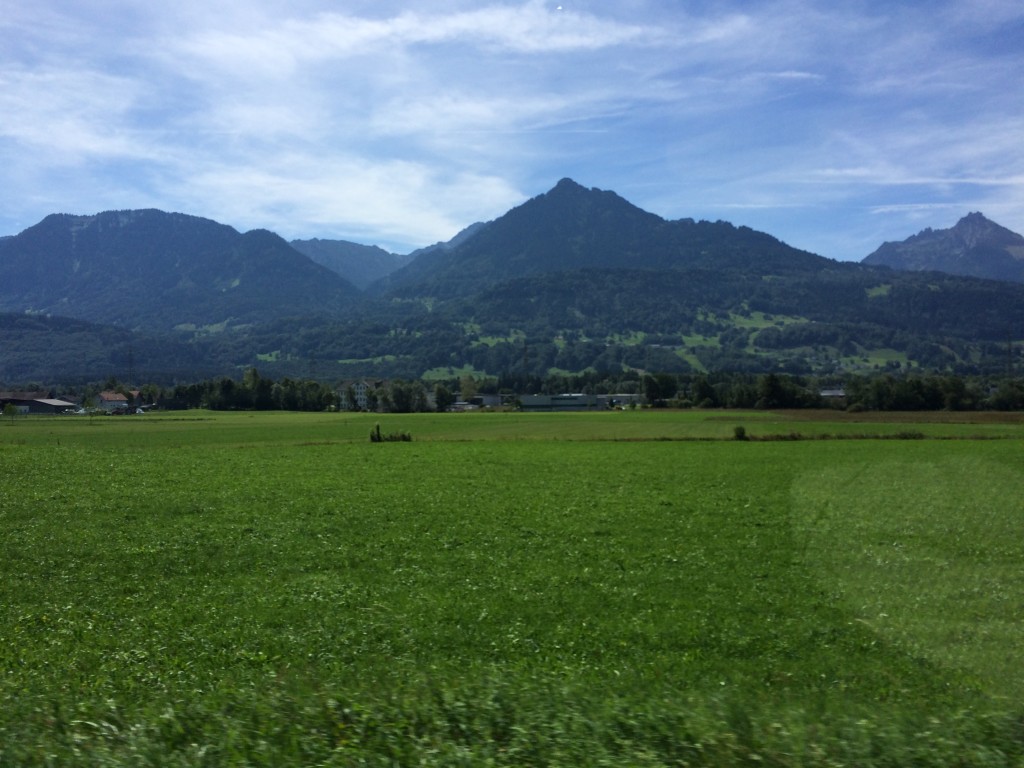 Everywhere, usually on the downhill side of the road, the fields were ready for this, my favorite agricultural activity. Look at those neat windrows of dried grass, ready for baling! 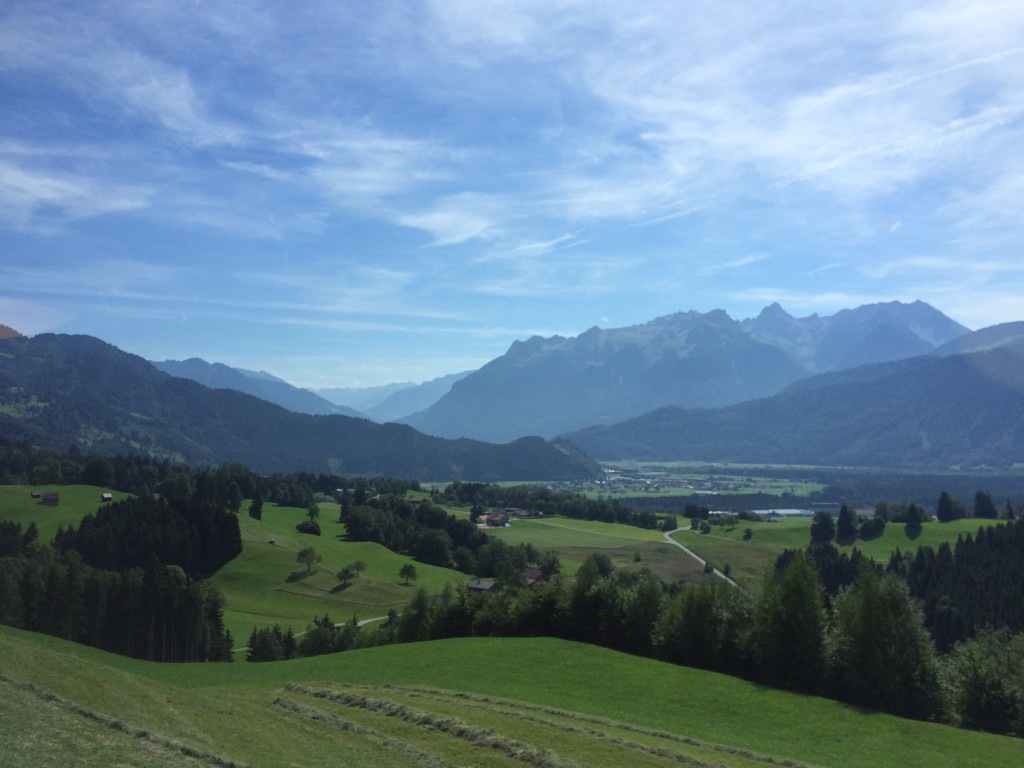 It was clear these parts needed to store up hay for long winters. Every little piece of land, and some I would have not tried to clear, had been, over the centuries, turned into nice hayfields.

Not a lot of veggie growing around here. This was dairy country!

[It was also stunningly beautiful…about the best car ride I’ve had in a while.] 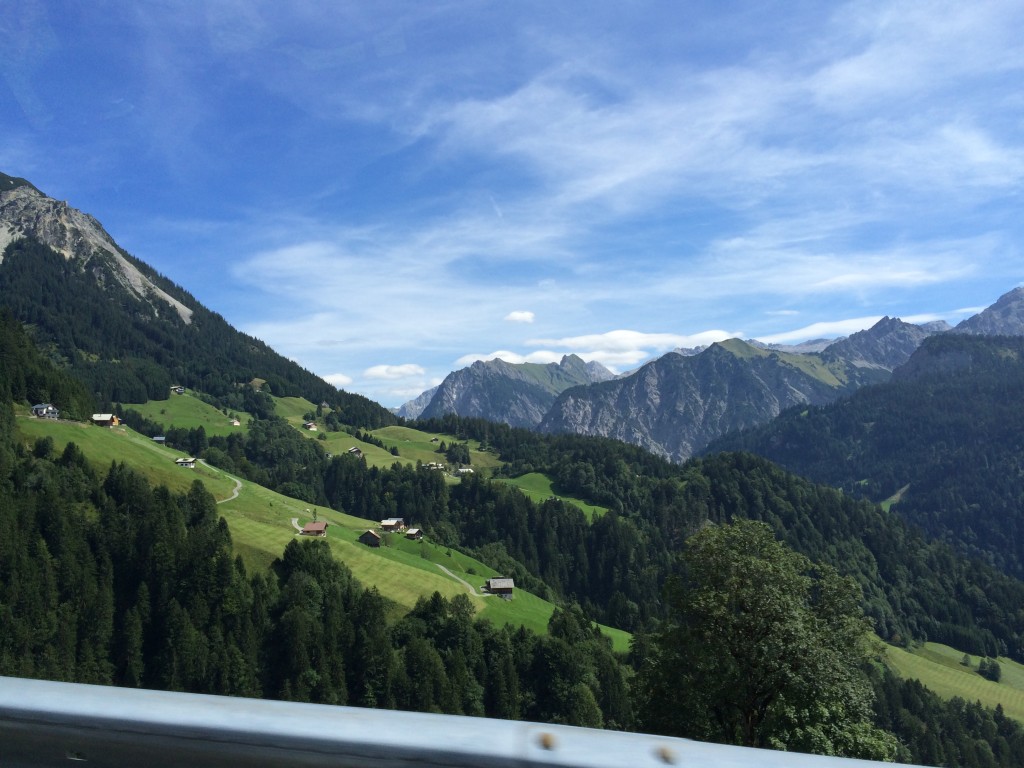 Here are my friends Mar & Marc – we stopped at the pub in town, well, at the base of the gondola. The Bergenbahn. Love the german terminology.

The waiter was a gruff looking but friendly fellow who wanted to practice his spanish – from his days skiing in Argentina. The beers were large and just right for a hot day.

But I was missing haying. Carl Dickson would have fit right in here. 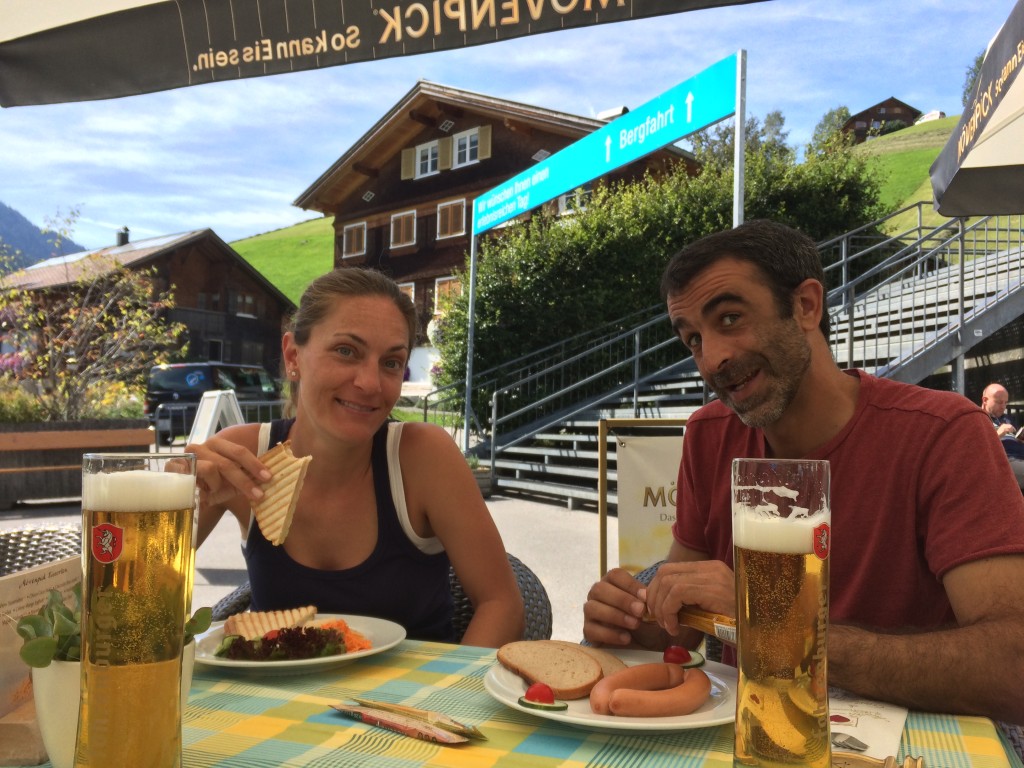 Out behind the pub, in an immense field, I started to realize the differences between haying in Voralberg and haying in Middlesex County.

Notice in the distance a lone figure. He is pushing a massive walk-behind mower, which has a sickle bar as the cutter attachment at the front. The dude is going to cut the field walking on his own two feet! 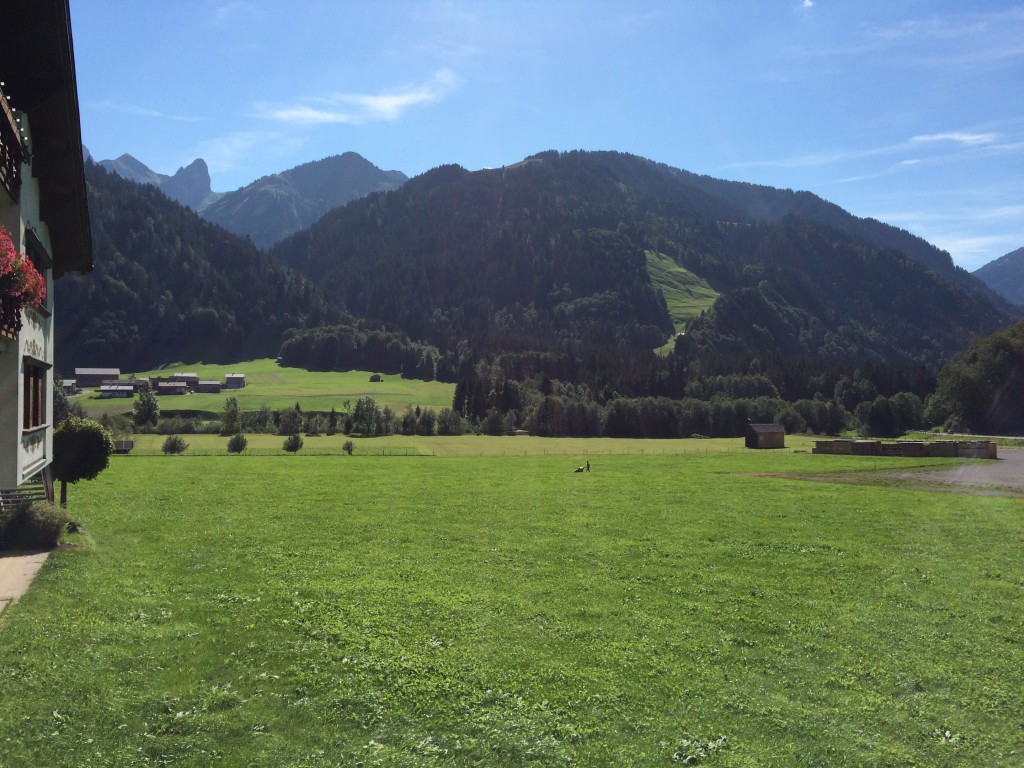 I was trying to get a shot of a family gathering in the parking area behind me. It was definitely a “hay-huddle” among the older folks and the my-age folks. These people are serious about hay. They even hay their front yard!

Notice the windrows of cut hay on the hillside in the background. I like the massive snow-protective overhang of the barn in the center. Notice the solar panels on the roof behind my head. I like this place a lot. 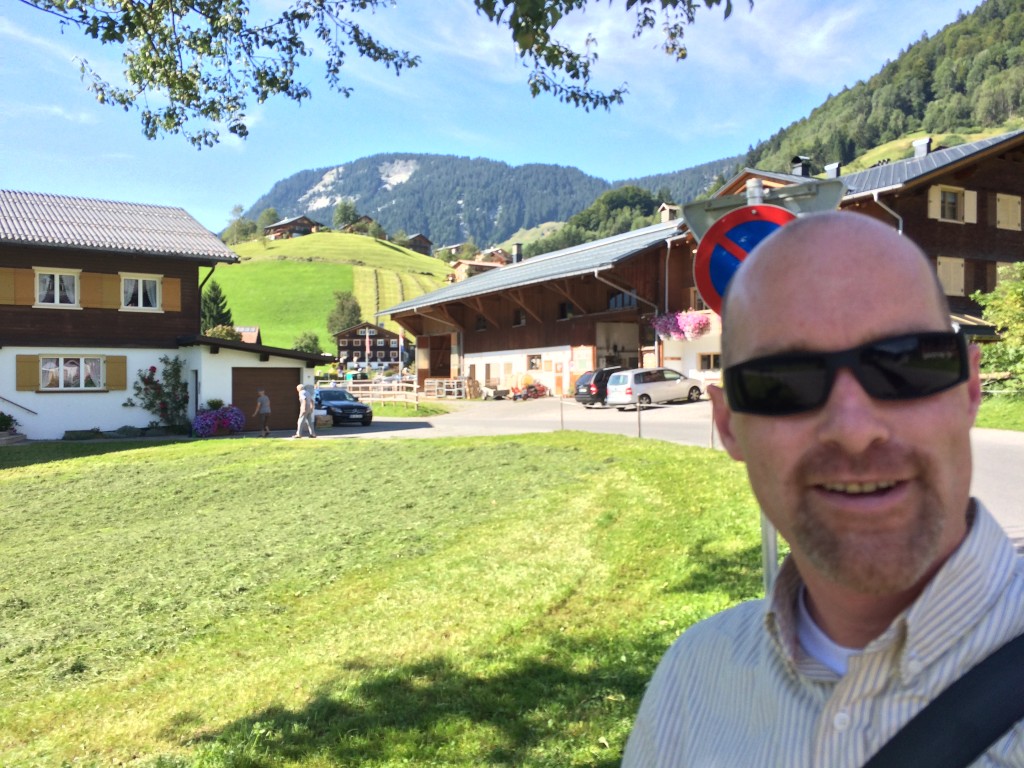 Here’s another interesting thing. No, not the beautiful mountain in the background, but the little hay-wagon-truck picking up the windrow. It was basically a truck that drives along gobbling up the hay and packing it into a massive bale in the payload. This thing was cruising – 30 seconds to clear a 300m row or something like that. Whew! 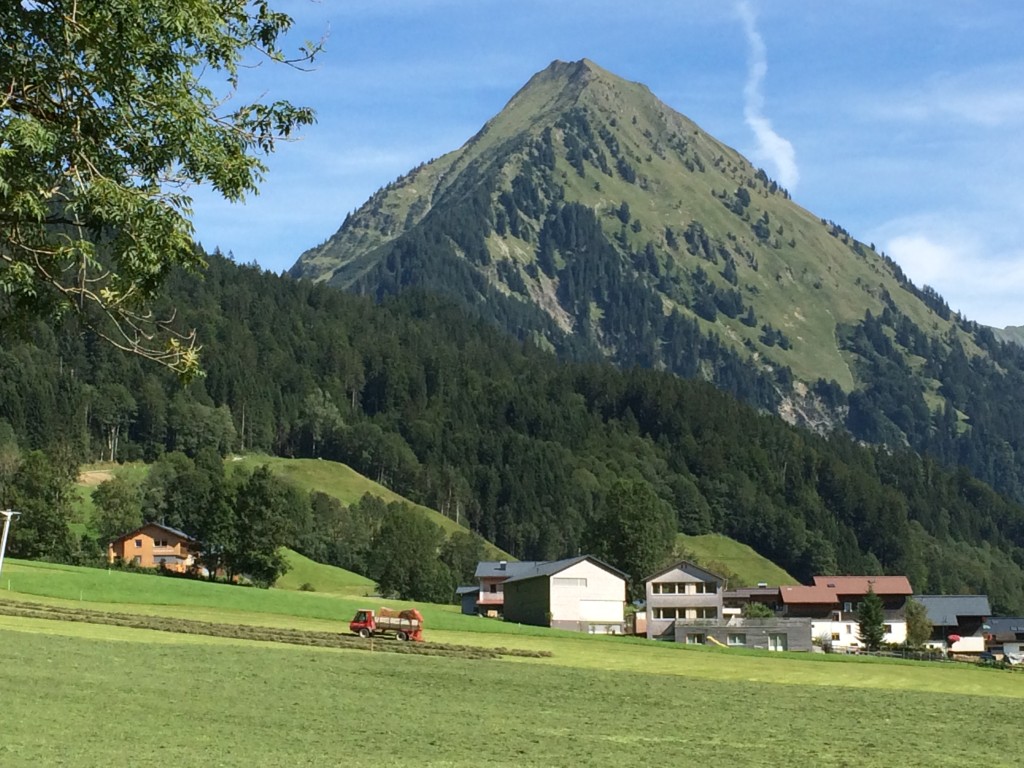 Here’s another piece of awesome: the tedder (the instrument that fluffs up the hay by sort of twirling it around – to help it dry the day after it’s been cut) has its own machine – the super low-profile mini-tractor-kart below. With glare shield!

What I’m realizing is that in a place where there is no soil cultivation, no ploughing and so forth, the machinery can be different. You don’t need all the horsepower of a tractor, and thus, you use specialized equipment just for haying. I was amazed. 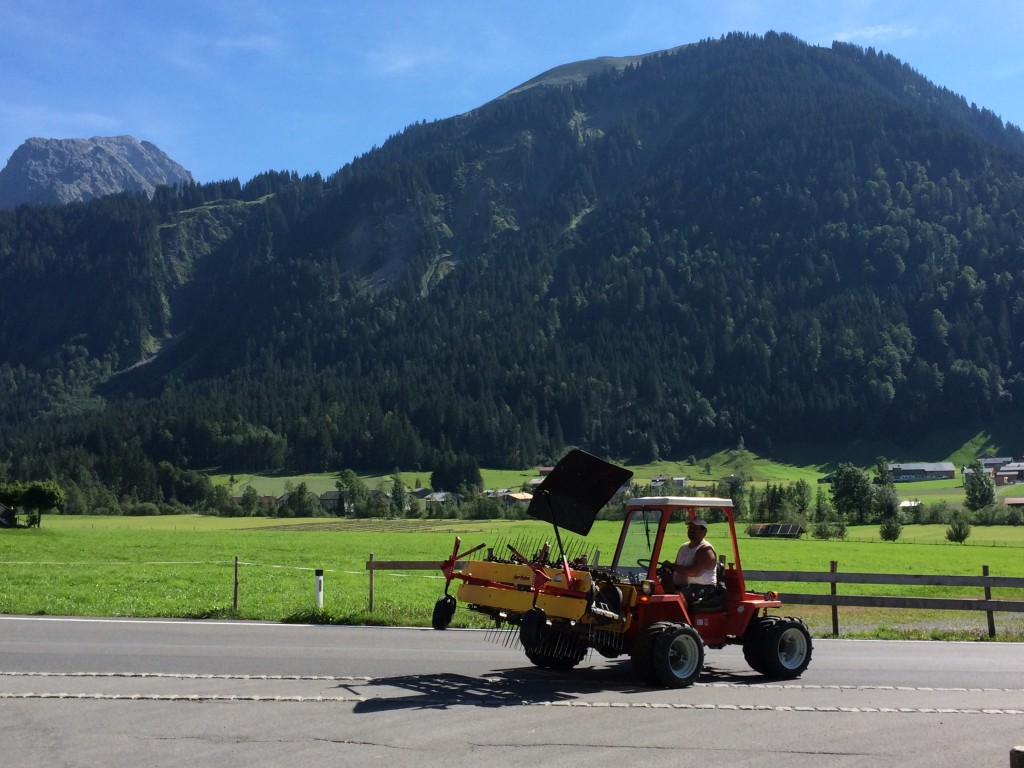 And the wonders would not cease!

Here’s three generations taking the brought-in hay and helping get it into the barn’s loft – with a special hay elevator! No crappy clackety-clack conveyor chains, here is a hydraulic lift to bring the bundles up into the dry storage for winter. Love this!

[It looks like it’s going into an inn or something – this is an optical illusion of the hotel building closer to me, with the barn behind it. Though I wouldn’t put it past them to have hay storage in the tops of hotels in this town!] 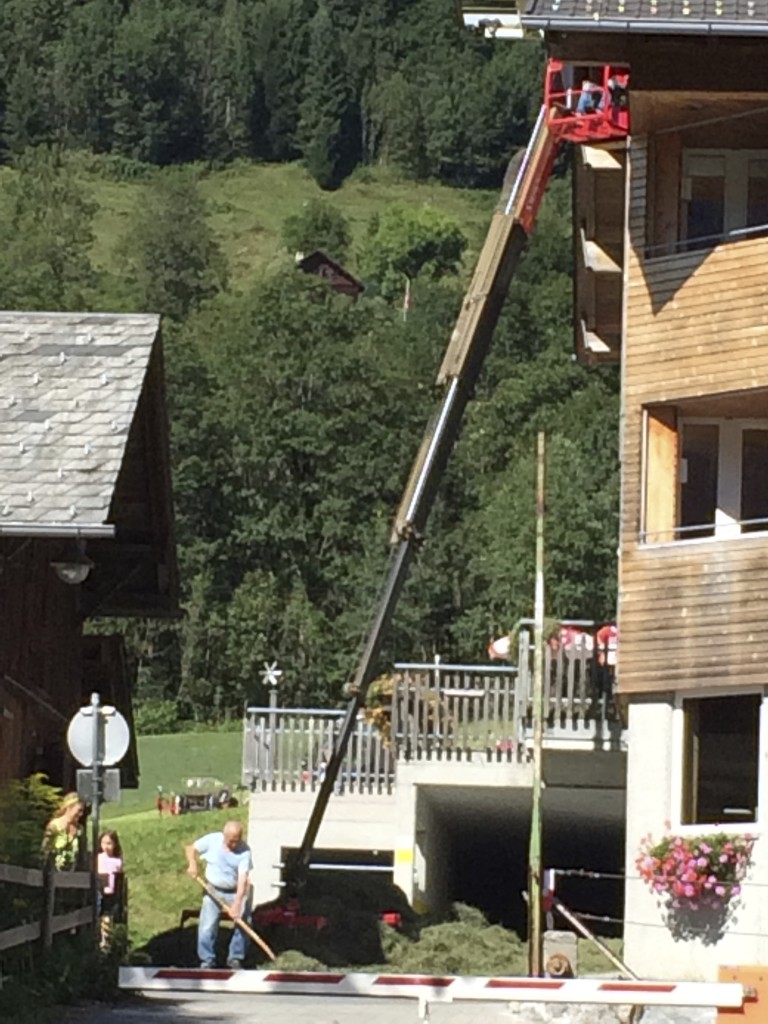 One thing I really like about hay is that it’s like taking summer’s solar energy and capturing it for the critters to eat through the winter. Cheese is like concentrated sunlight. Sun to fields to cows to milk to cheese to YUM!

I can’t say it enough. This was the most magical and delightful landscape I’ve ever been in. Look at all that hay! 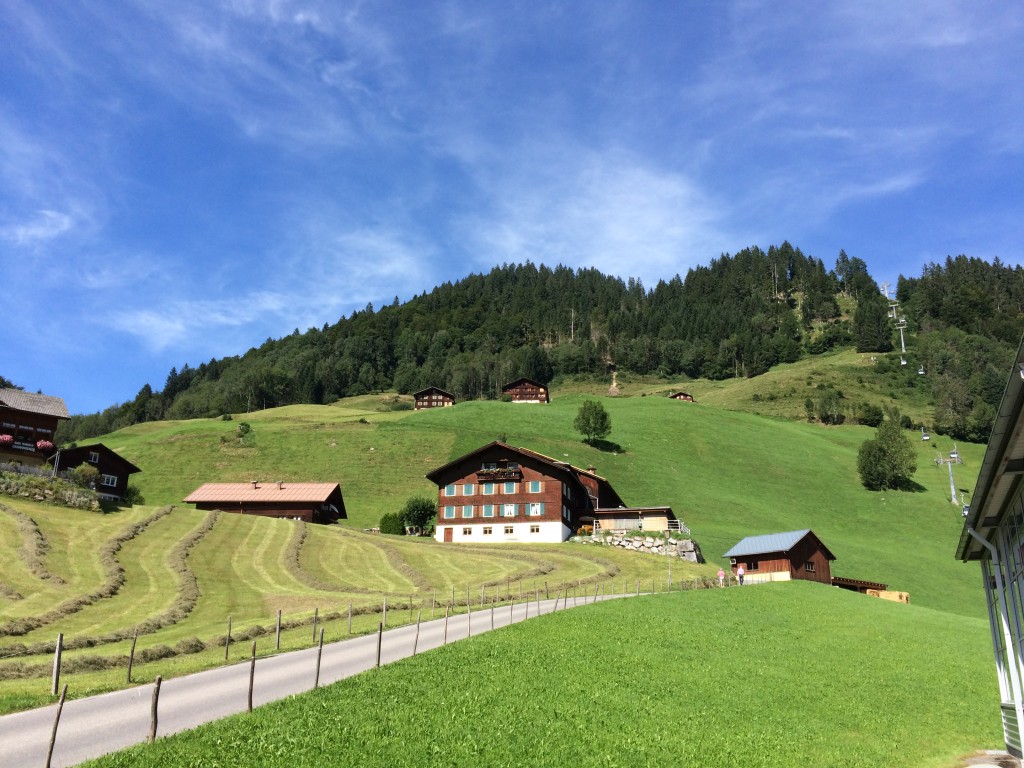 And everyone was out and about helping out! I was very close to running over to volunteer… 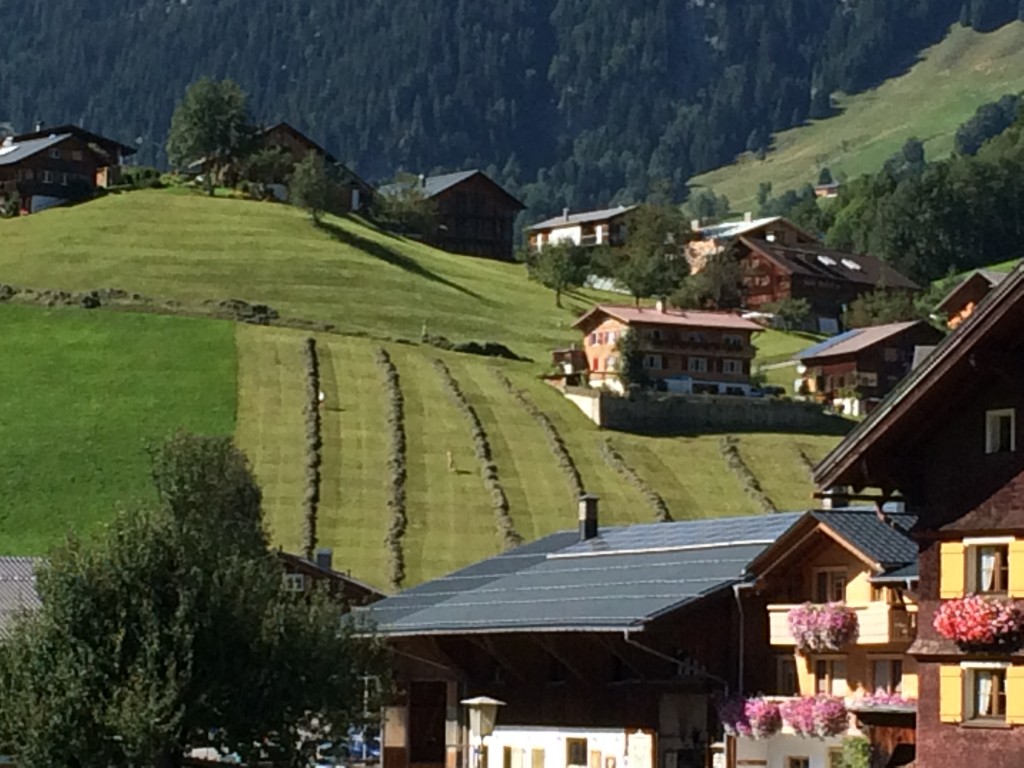 There goes another little hay-kart, with a rack creating windrows from the downed hay. Probably was only cut the day before – it was so hot and dry out, and this being second cutting, very light and thin.

And what an amazing work setting to be in! 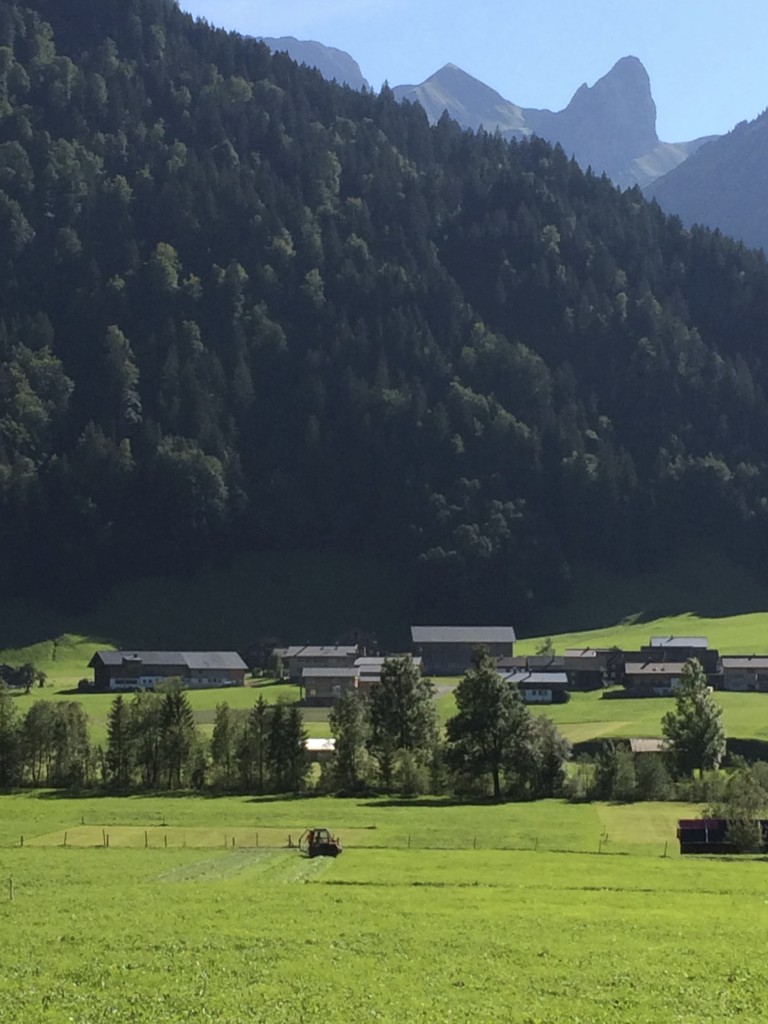 Shortly, I had to catch my ride up to the hunting lodge for the main event of the Weddingmoon – but someday, I’ll have to come back  in late August to be sure I can schedule a little agricultural tourism with the hay farmers of Schoppernau! 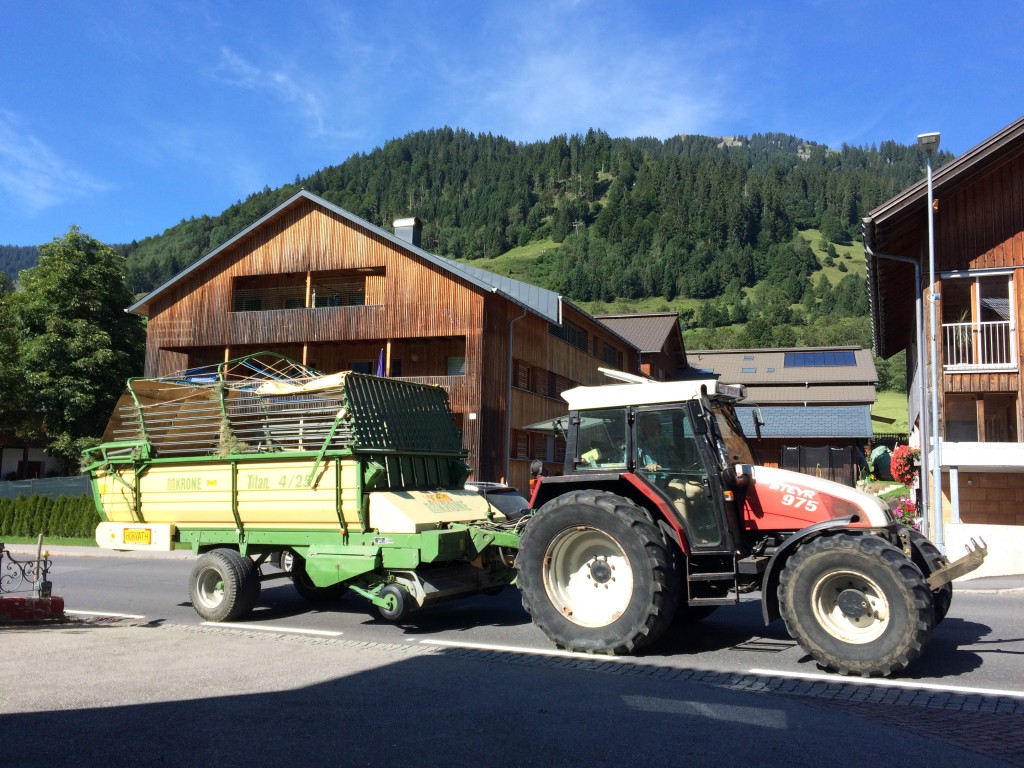 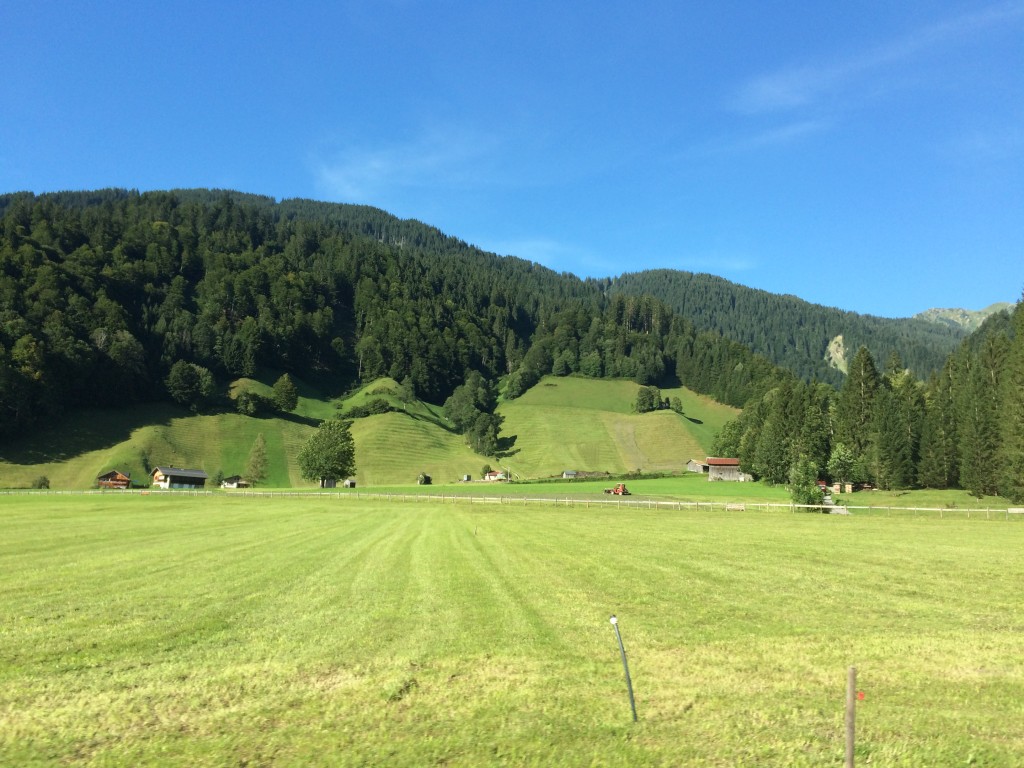 Extra bonus: the great song from the local band HMBC that one of the wedding guests shared with me: “Vo Mello to ge Schoppernou“