After months of anticipation, Greenbuild was happening!

I was thrilled to plan a journey to Washington for this exciting gathering of our tribe of green building professionals. And it lived up to the thrills.

It really got me thinking about how we are going to organize to make a real success of Greenbuild 2017 when it comes to Boston! That is really a motivating force for me and my team.

We rented a house for the Chapter – for a variety of people to stay at and hang out as a base of operations, about two block or 7 minutes north of the Convention Center. It was in the middle of the rapidly changing Shaw neighborhood, which has a lot more history and dynamics to explore. I enjoyed a few new restaurants and looking at all the new development in the NOMA area south of the convention center, north of Union Station. DC is big time. Very cool to visit.

And the convention itself was such a great gathering of good old colleagues – wow! Nice to connect with so many wonderful people from across the country and the world.

You can see a bigger collection of my photos here.

There are a variety of things that happen at Greenbuild. Below is one of the main plenary sessions on affordable housing and sustainable communities. We heard from many within USGBC about the programs we are bringing forth, especially ADVANCE, to support the bigger agenda on that front. 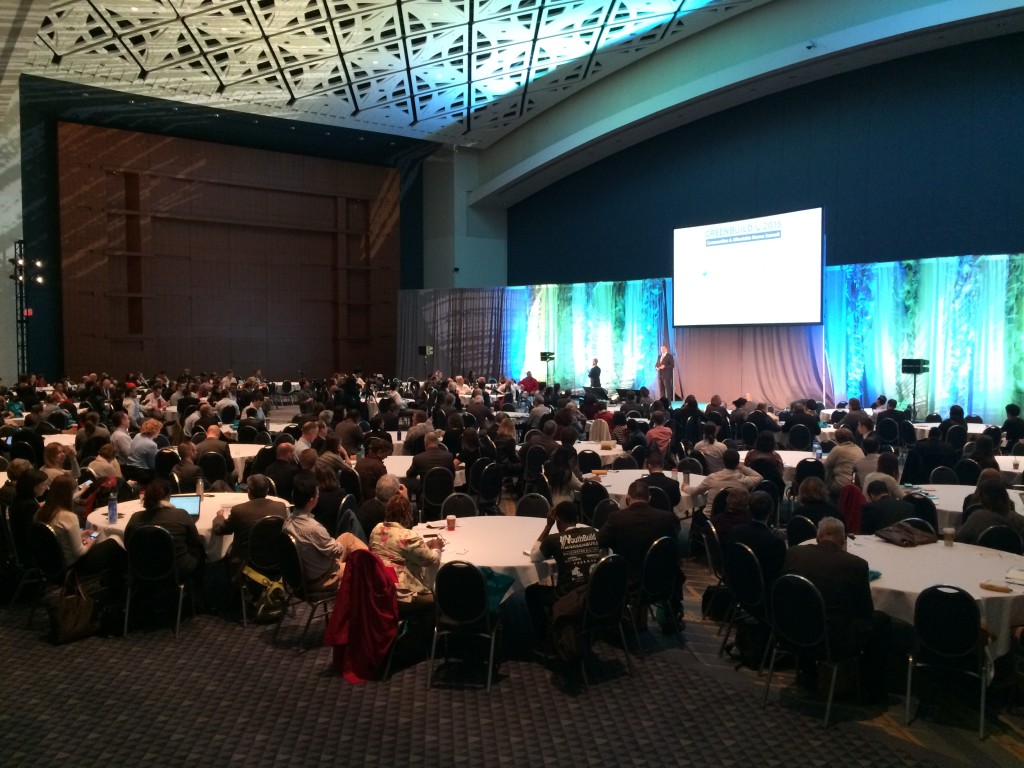 One of the more awesome programs was from this pair from Oakland CA discussing their book “The New Better Off” which went into some of my favorite topics related to cooperatives, the sharing economy and the pairing of sustainability with empowerment. Courtney Martin, gesturing below, is still working on the book but here’s an article on the theme (referencing my fav, Fritz Schumacher). 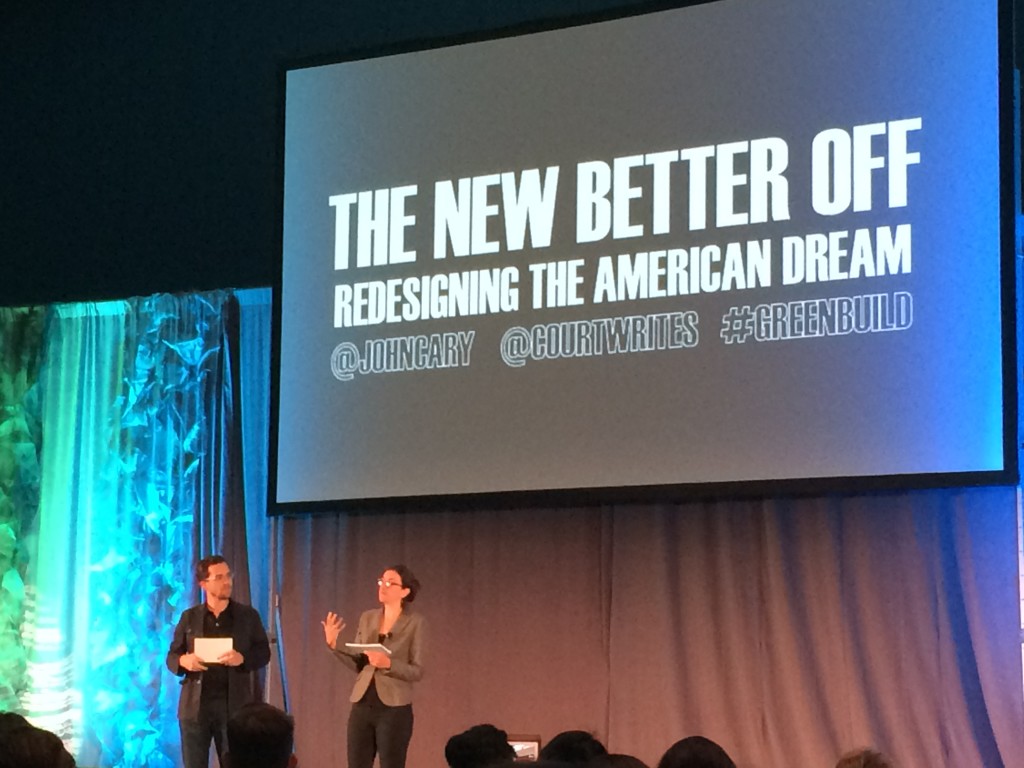 Here’s the A-Team – Alana, Celis and Grey in front of our AirBnB rental on 8th at P street. 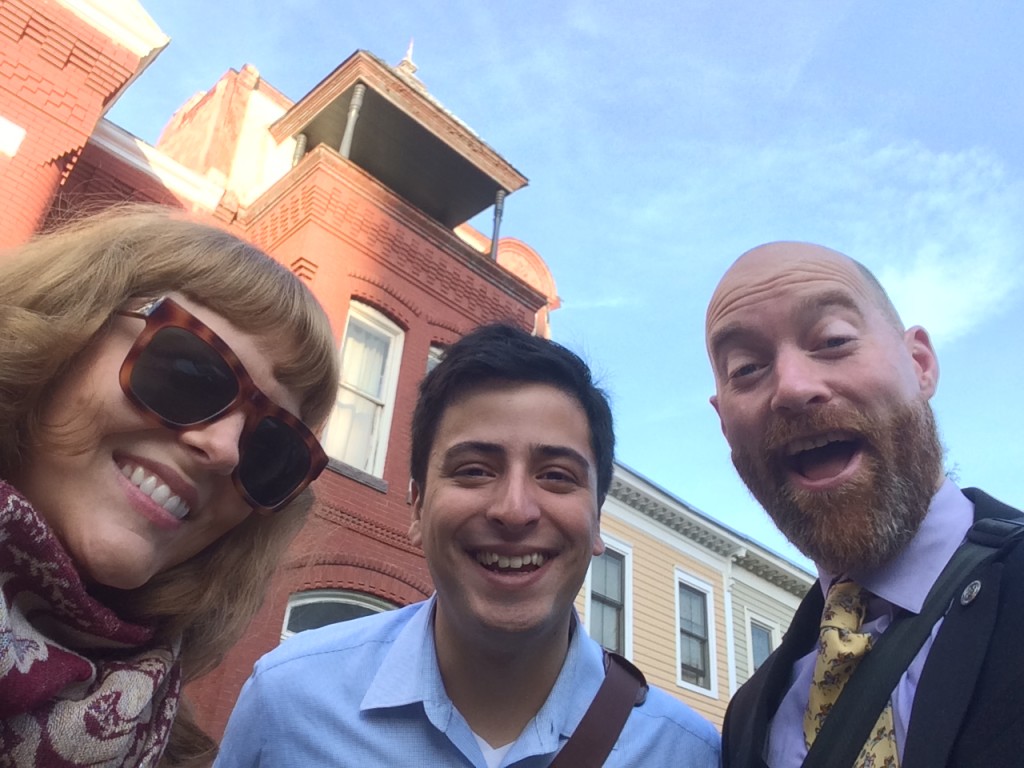 This is the main nexus of the convention center – taken from the main staircase that goes up to the ballroom/plenary halls. Out the doors in the center one spills out towards the vibrant Chinatown area with loads of restaurants and so forth. And the portrait gallery of course. 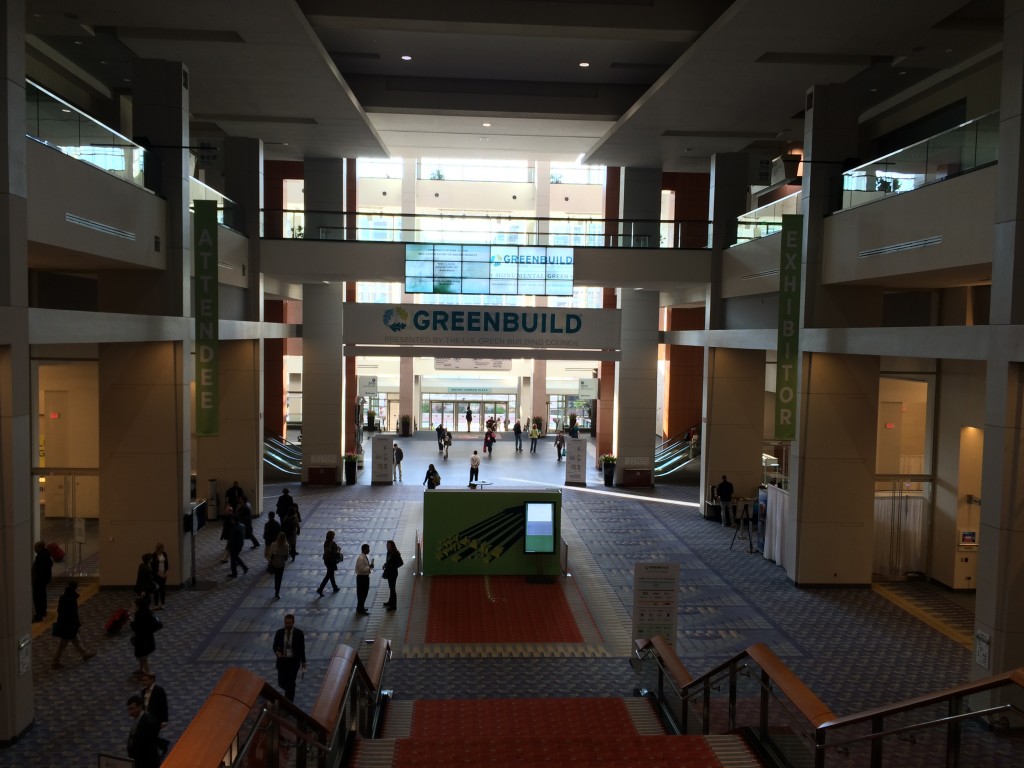 And here’s the trade show floor. They actually had security preventing people from taking pictures from up above the hall as you enter. But, I, being crafty and quick, found a gap in the wall as the escalator descends and snapped this one. And there you have Brendan Owens (center in black vest), the Director of LEED or whatever he is – big shot in the creation and evolution of LEED. Hi Brendan!

The trade show had a ton of great vendors. Loads of people visiting. It was fun to do the rounds introducing myself to our sponsors and collecting cards of some sponsor leads. I did hear rumors that it wasn’t as well attended as anticipated. It was located 15 minutes from everything, even though it was in the same building. If it had been easier to get to, more people would have attended. I wasn’t sure what the logic was – if it’s harder to get to does that mean people head over and stay longer? Or would there be some benefit of having it closer and people able to come and go more easily? I think the logic played for this one was somehow flawed, but I’m not a convention designer so what do I know!? 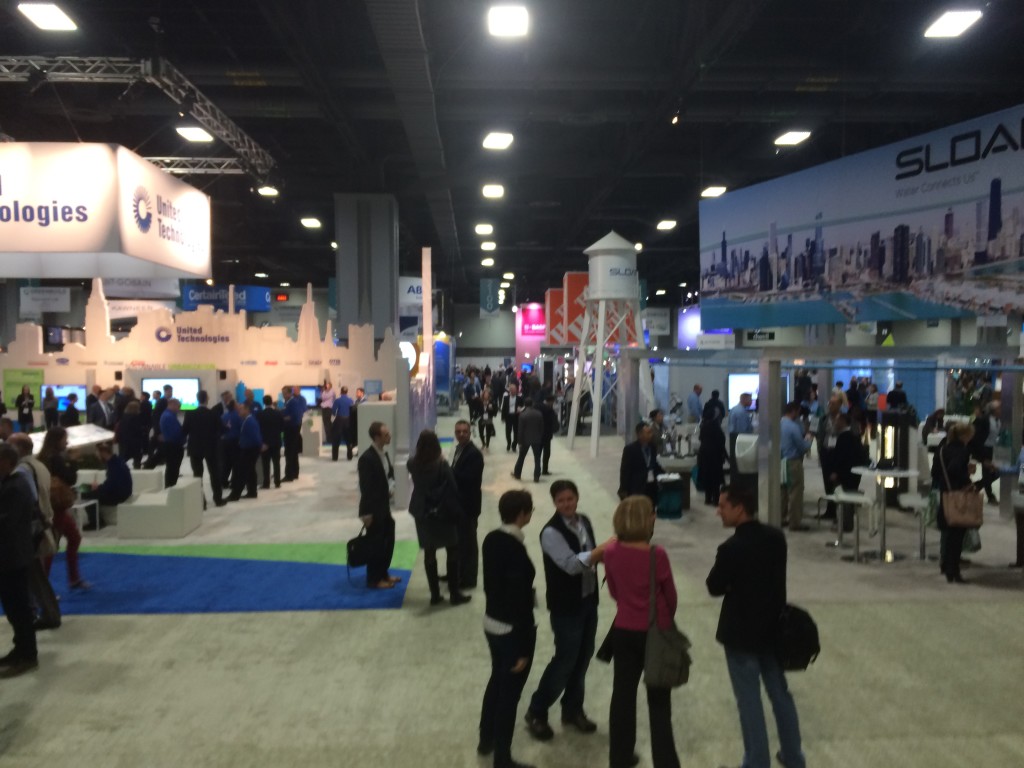 Quite importantly, the conference is full of educational sessions for general edification and of course credential maintenance. The session below was on the old chestnut “Green Leasing” and how to avoid the “split incentive” of landlords not caring about energy efficiency upgrade efforts because they are passing it on to tenants and the costs are so little compared to other tenant issues that a lease decision is rarely swayed by anticipated energy costs. One of the messages from Brad Molotsky was that tenants are starting to care when they line up their corporate social responsibility agenda with their property agenda…so let’s get going! 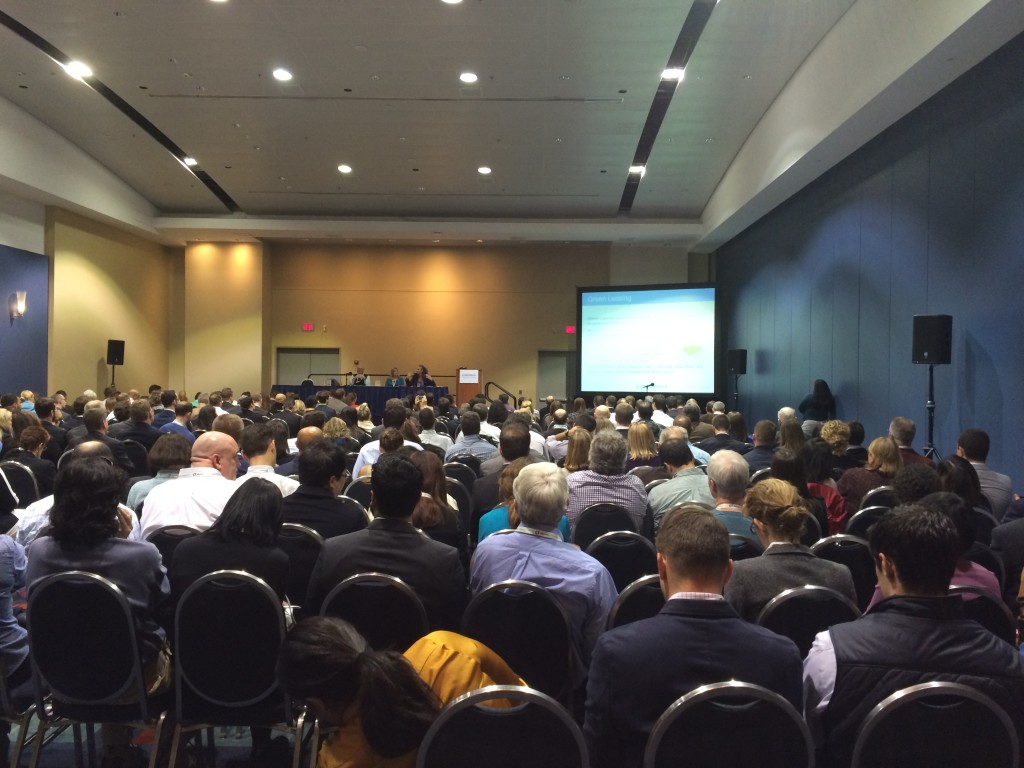 And then, there is of course the networking. The schmoozing at Greenbuild is as good as I have ever known it to be in any industry, but especially vibrant because the people are from all parts of the real estate industry. Very fun and generally caring people – we are all involved in this thing because we care about the mission, the fundamental effort to transform society toward sustainability and the massive effort that changing the industry will take. Below is a group shot from the BOLD Awards party which we brought our MA Chapter peeps to attend. Great times. Some people even did some bowling! 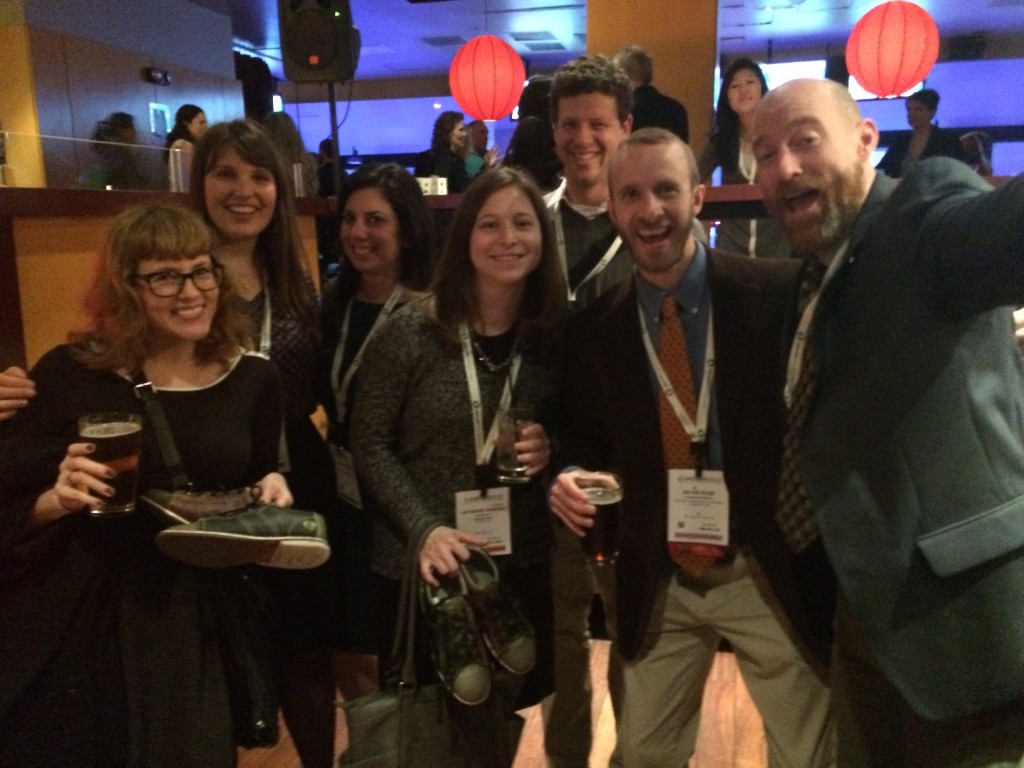 And here is our “Chapter Portrait” from in front of the big GREENBUILD sign. We were a bit harried and rushed here – perhaps we could have done a better job. But here it is. It was great to see all these people even though we knew there were ten times as many from MA at the show. And other parts of New England I’m sure.

We’ll do better at Greenbuild in LA, of course. 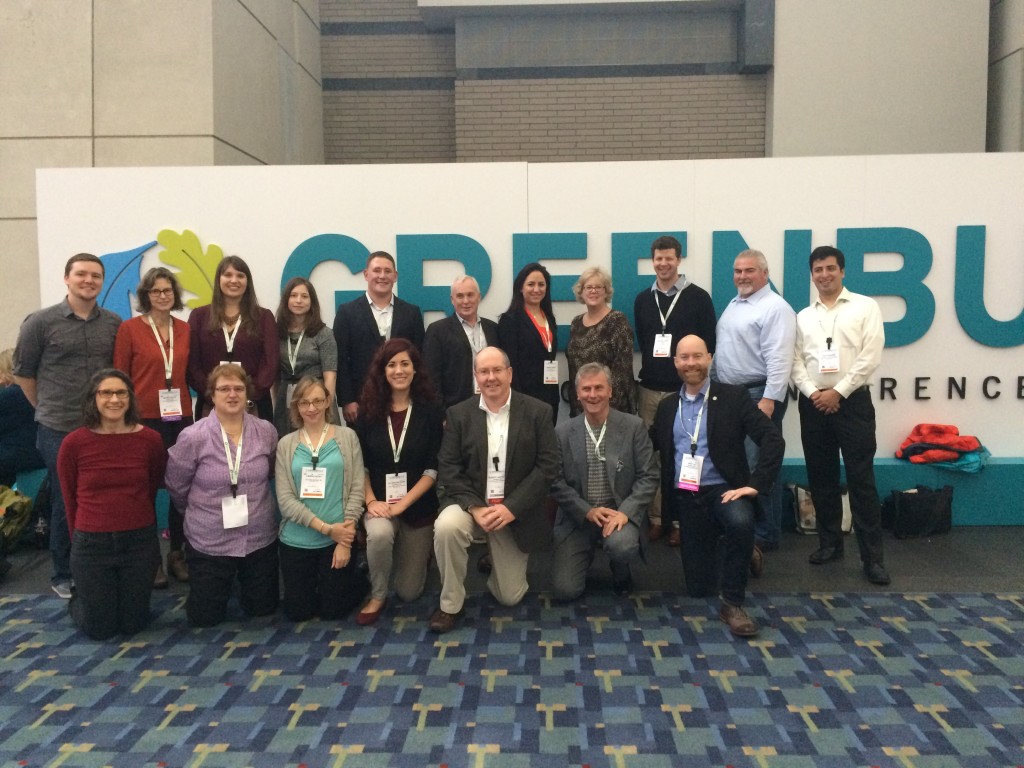 This is from one of the big plenaries when the old and new USGBC Boards of Directors were acknowledged and thanked for all their effort on behalf of the organization. Nice work, Team! Our buddy Chris Schaffner of The Green Engineer is waving to us! 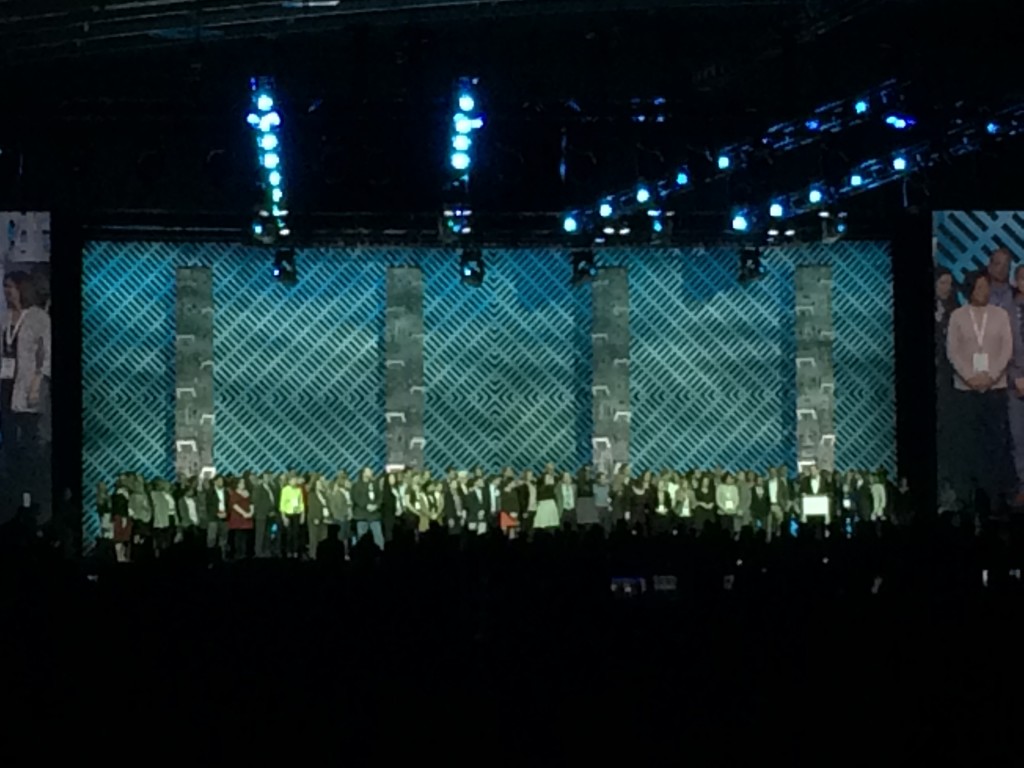 And yet the partying continued – this time in the Portrait Gallery’s atrium which was an outdoor courtyard last time I was there. Quite a nice set up indeed! I won’t belabor the point about the parties…you probably should just plan on attending one of these things. 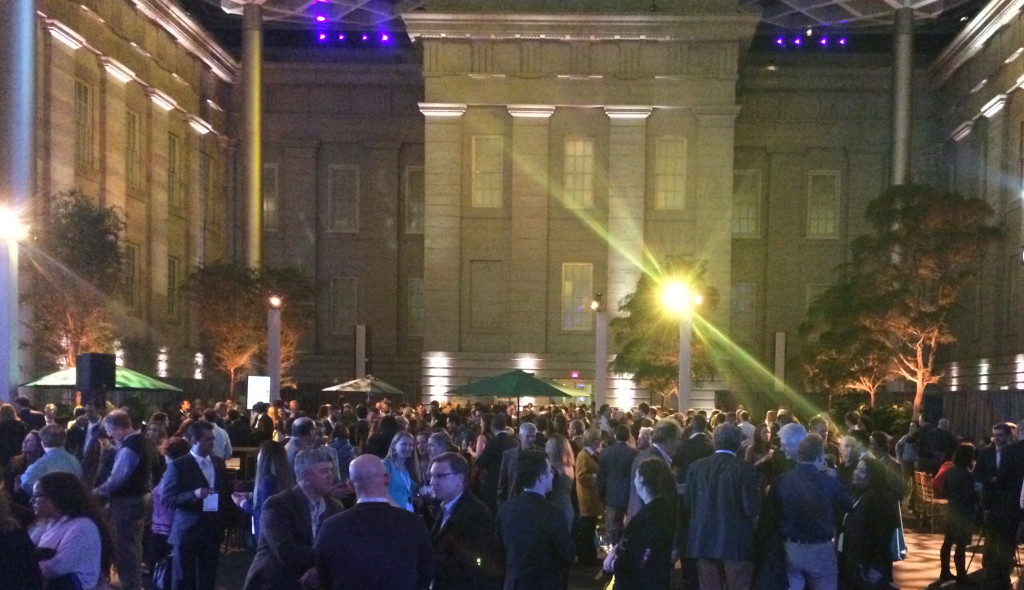 And here we have “The Rikka!” – Rick Fedrizzi, USGBC CEO, who is stepping down in a year to open up more space for more potential. He has, with the Board, selected Mahesh Ramunajaram (current COO) to take on the CEO position. That must have been quite an interesting effort of discernment. 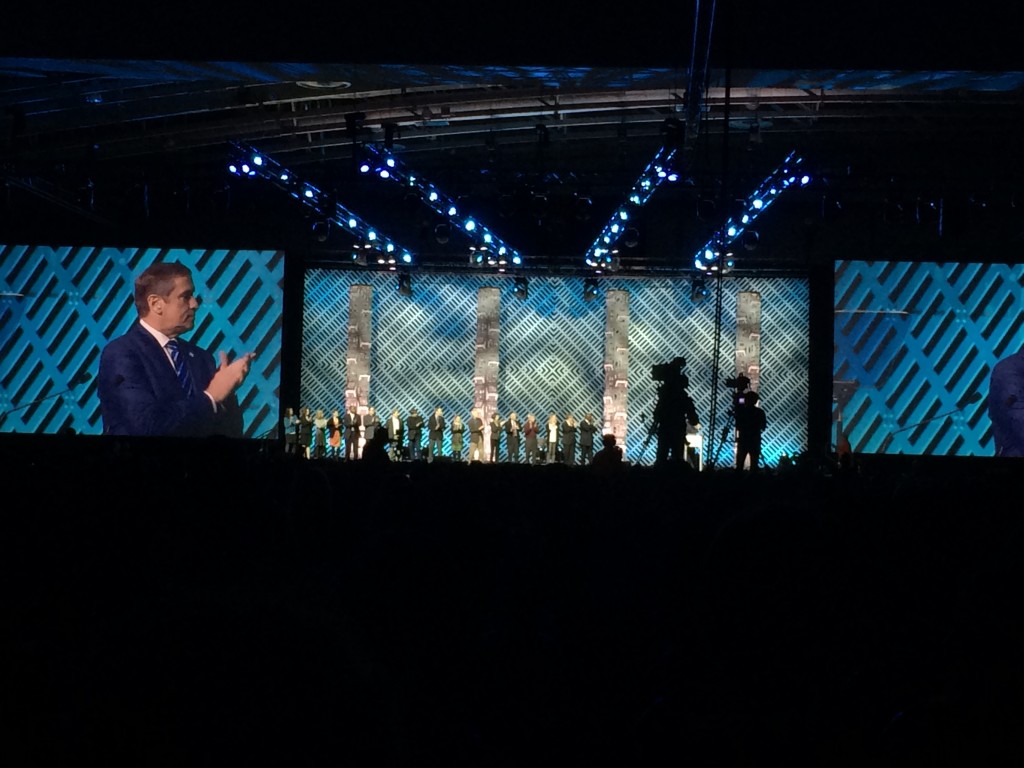 I can’t leave a blog about a big event in DC without a definitive pic of DC! This is at the Newseum, the great museum about news and reporting and current events right on Pennsylvania Ave near the National Gallery (in center) with the Capitol obvious. It is quite lit up because it is all behind scaffolding – luckily that aids this picture rather than detracting. The Newseum party was really awesome and somehow I scored VIP tickets and go myself into a conversation with the CEO of the sponsor Kohler and Jack Spengler of Harvard’s Chan School of Public Health among others. Always a pleasure to work the crowd and try to get more people to think about what we’ve got going on in Massachusetts. 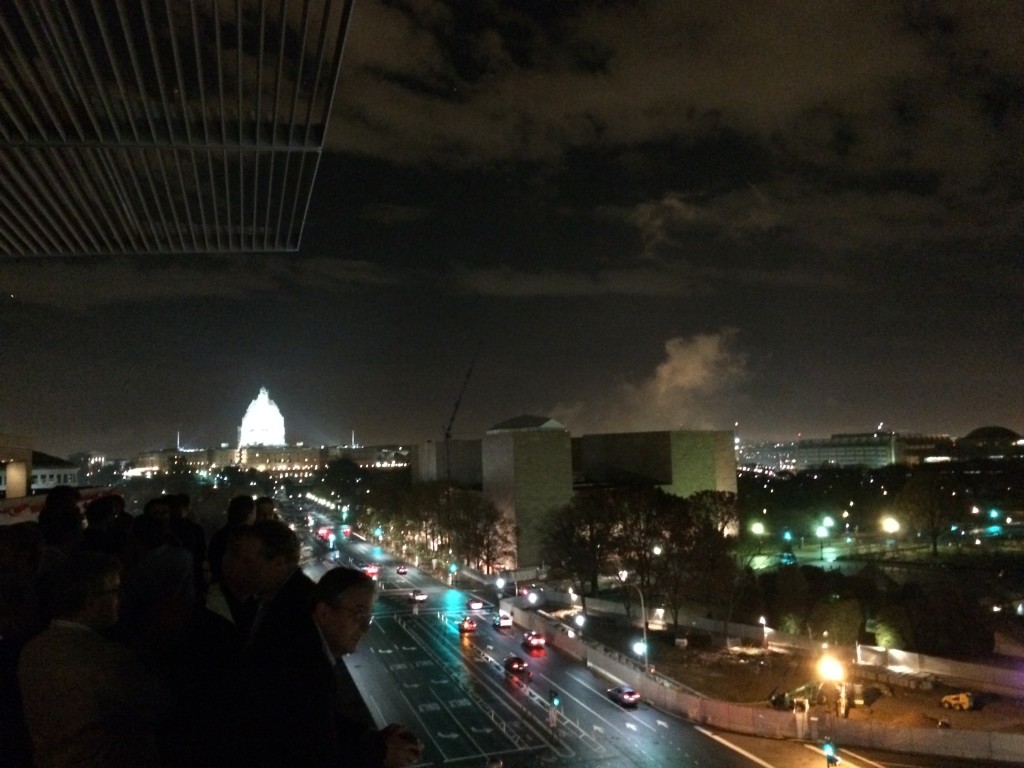 So do take a look at the bigger collection of pictures on Flickr through the link above, and feel free to ask any questions as we plan involvement in Greenbuild in the next coming years. We are ready to Rock!