This year we went for it but had that “balancing” adventure – not the real epic mega-hike you want when you head up to the north country.

This was what it was like most of the day: 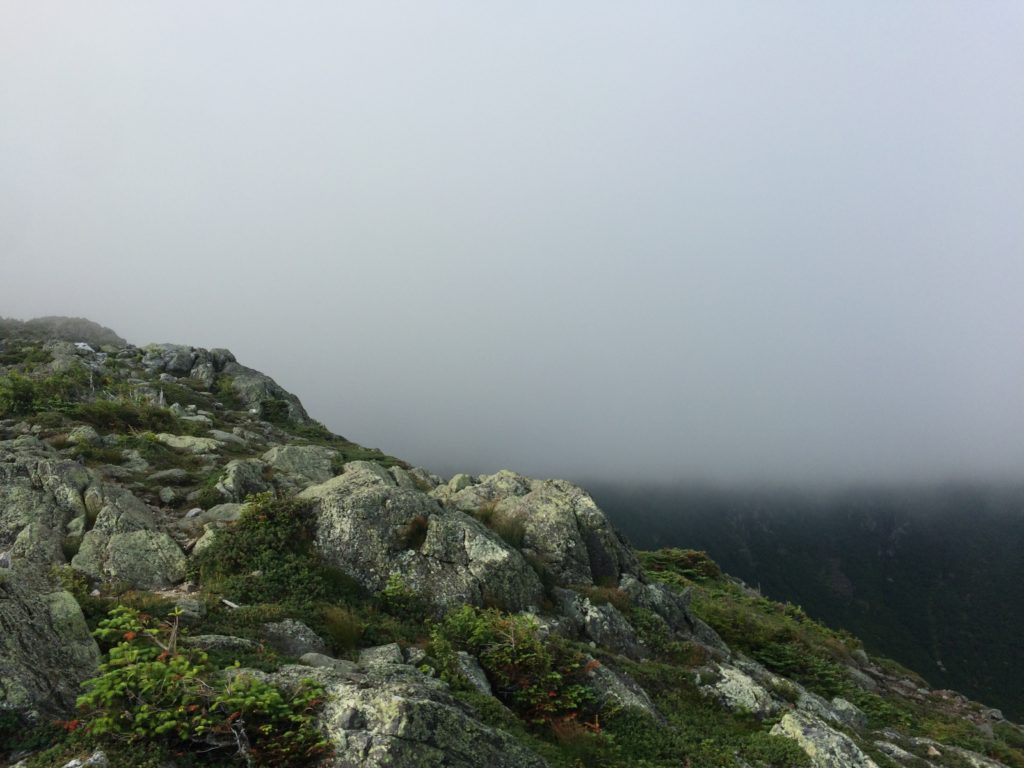 It was good people, good times, and all that, and reminded you of how you just gotta go. You gotta go and see what happens. You can’t always have epic. But you can always have good.

We started out with our Friday night usual – Smitty Burgers at the Black Mountain Brewpub. Who can resist using two grilled-cheese sandwiches as a bun? 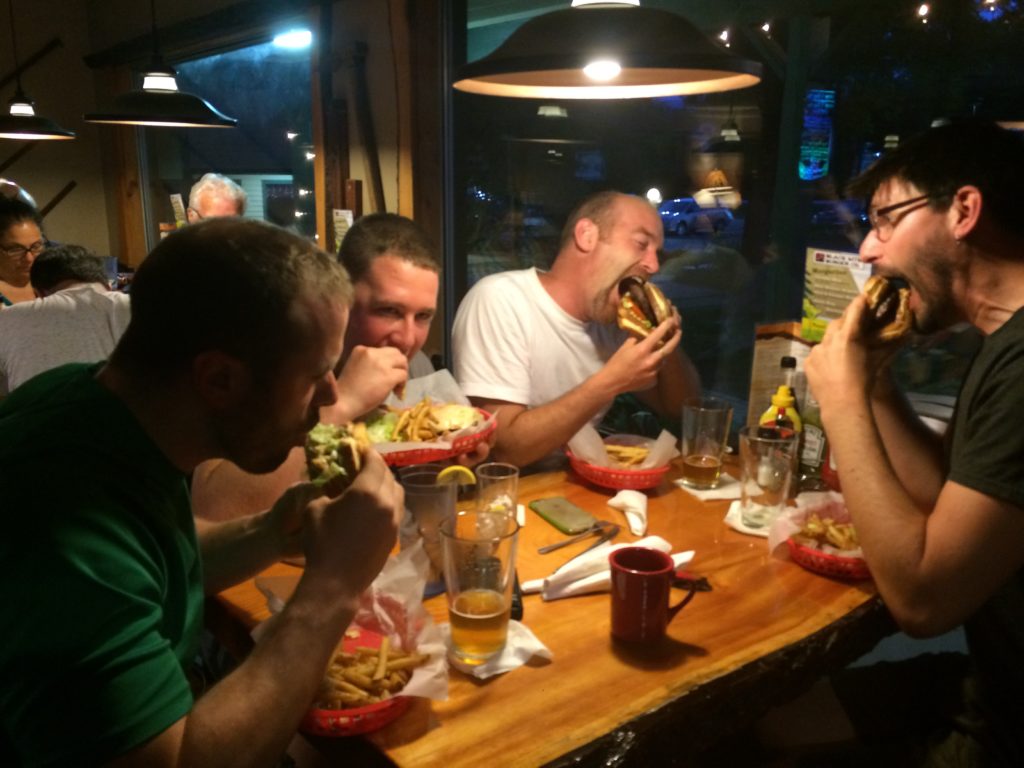 We slept on the old rail bed at Appalachia parking lot on Rt. 2 in Randolph. 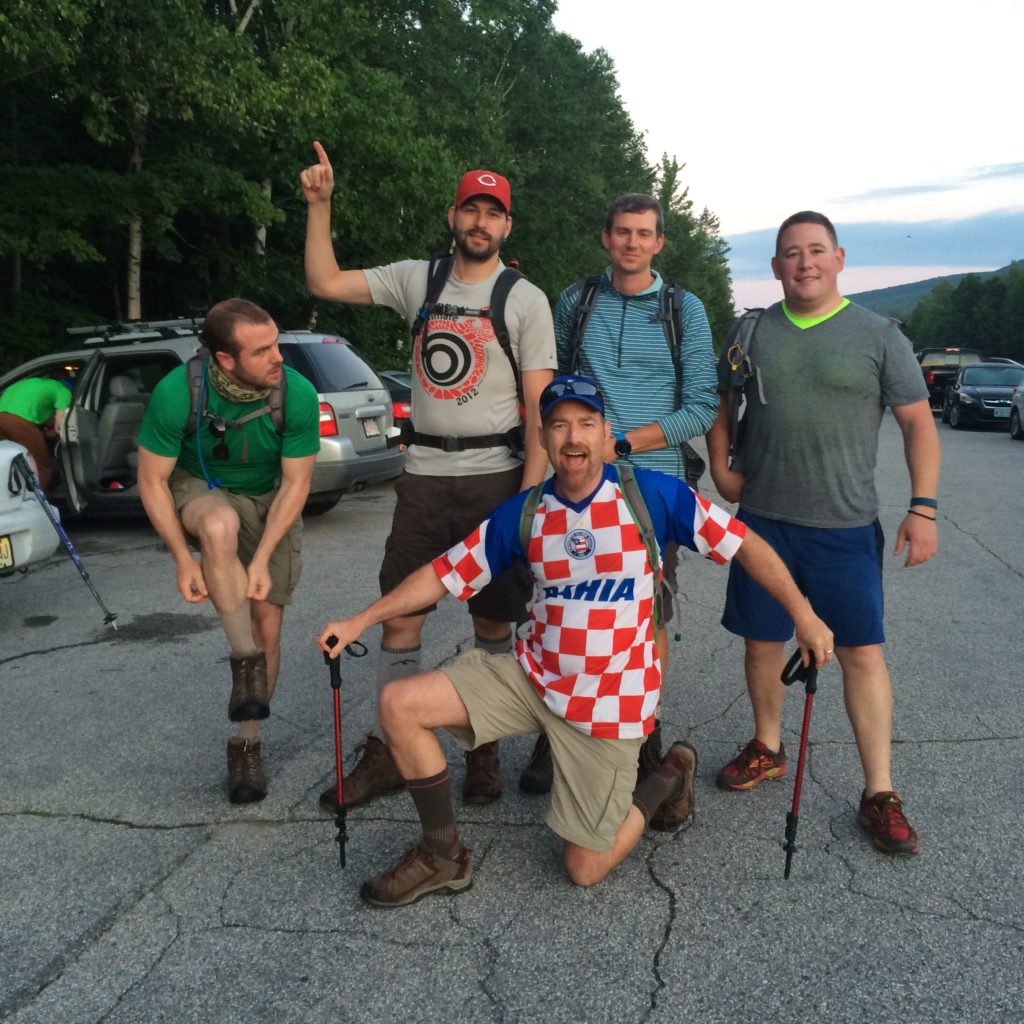 We hiked up Airline just as the sun came up. It was pretty stellar to have the sun peer through the trees like this below. I don’t know how I got the shot off. 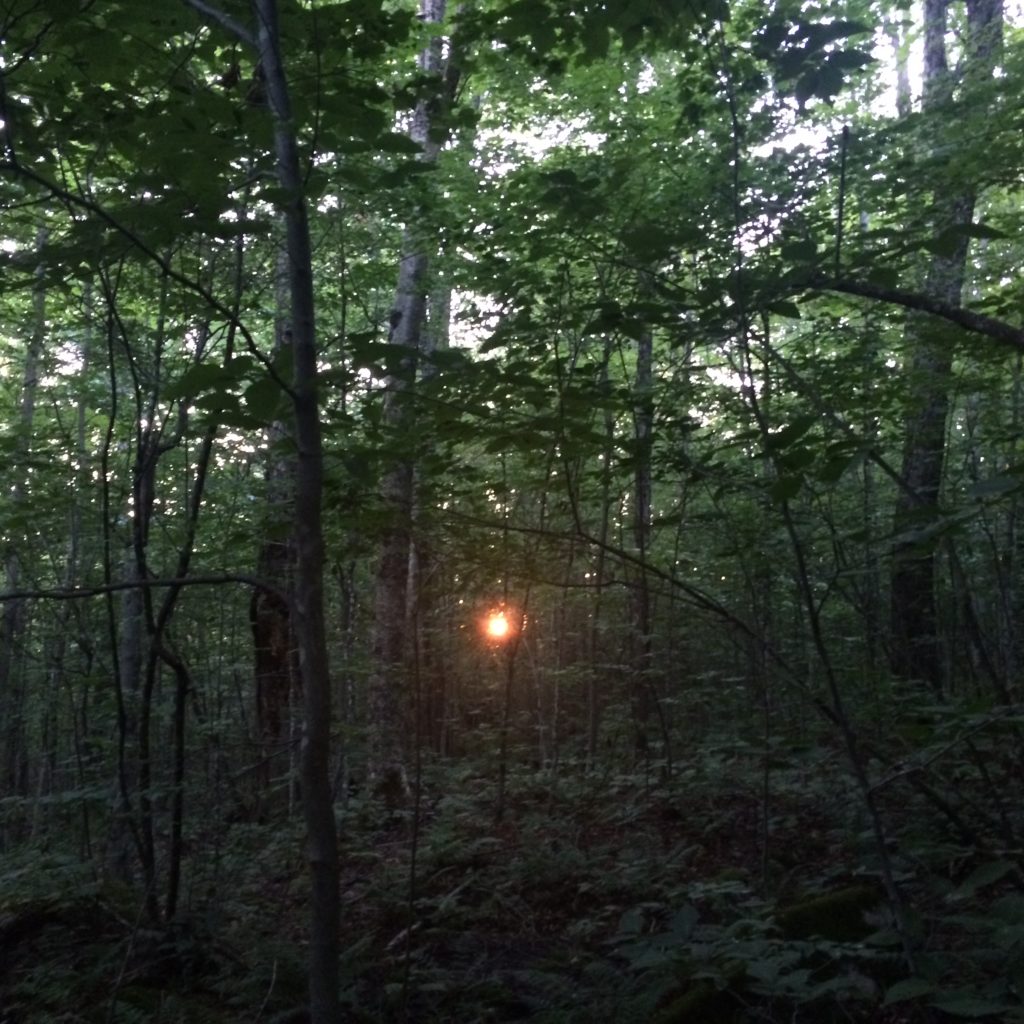 And the light flew through the woods illuminating like mystical fingers some of the trees as we walked through: 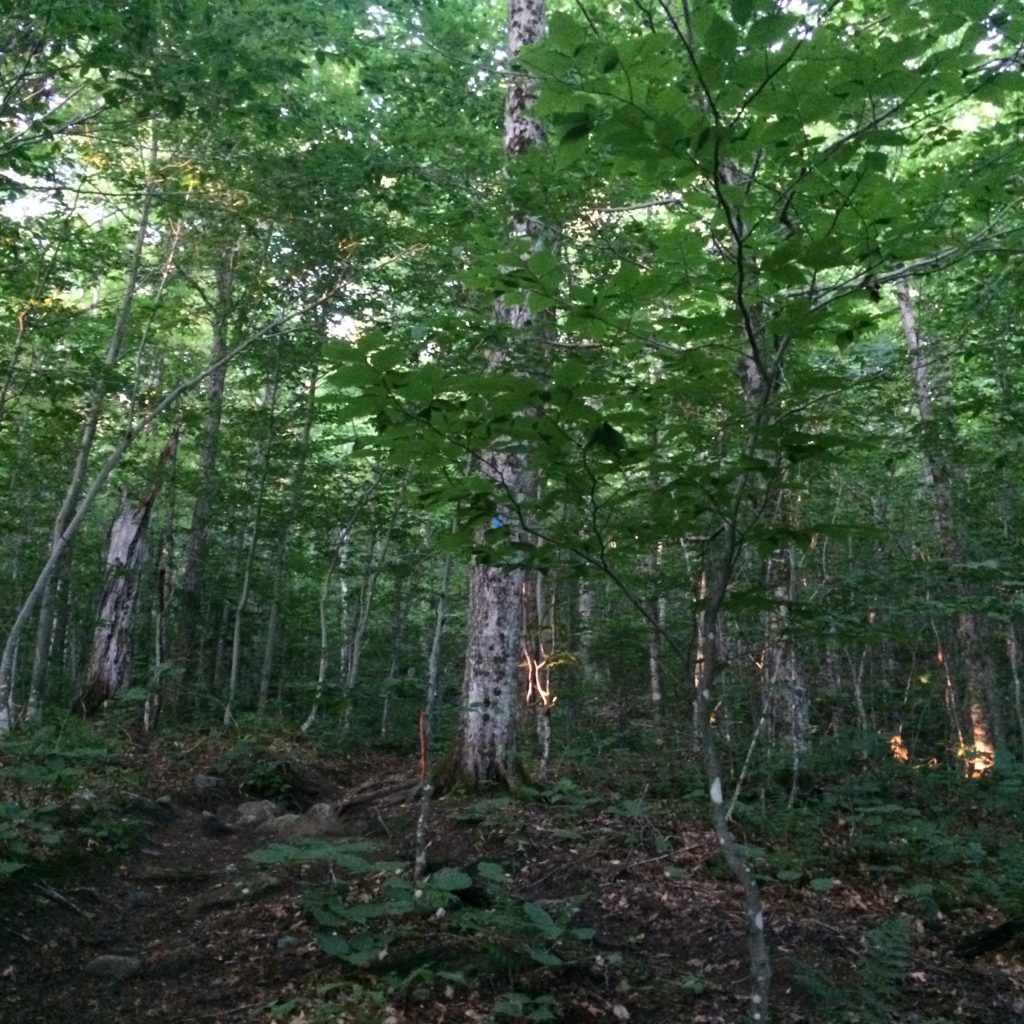 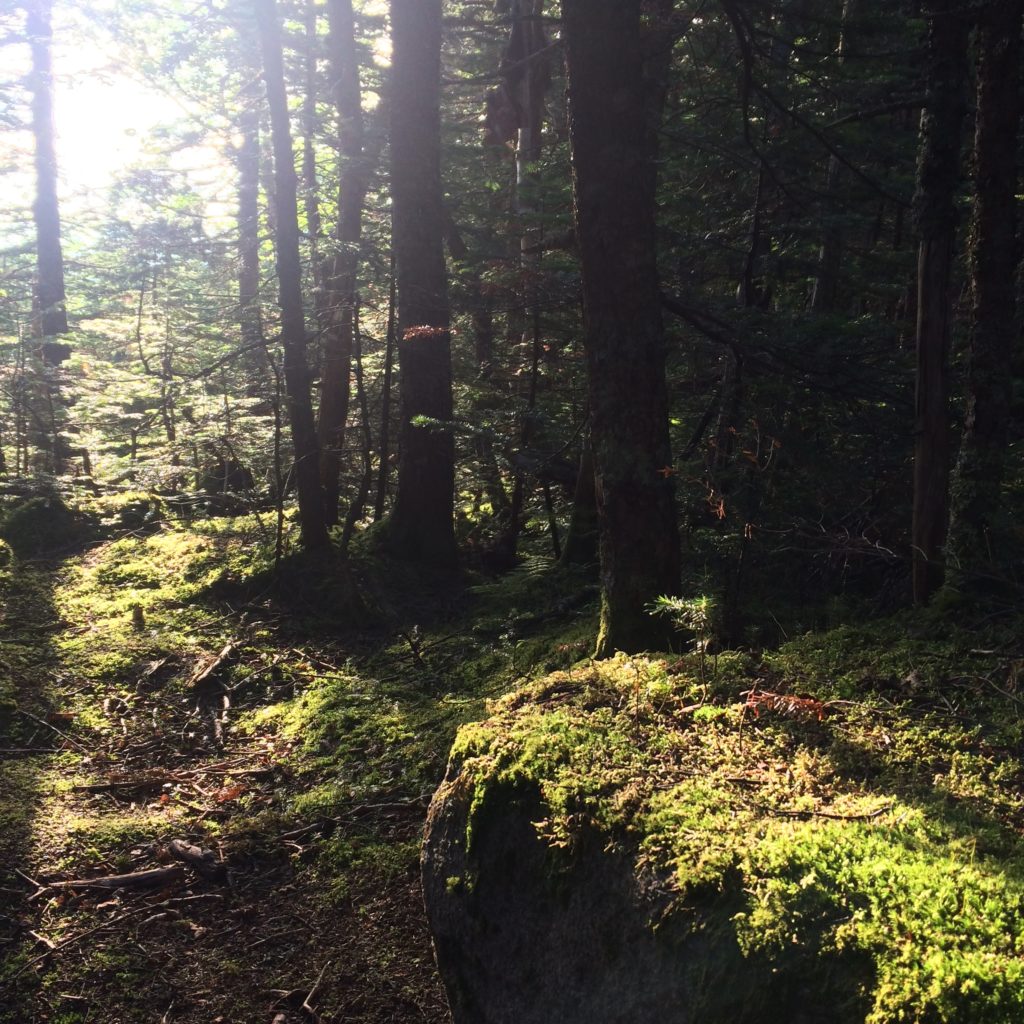 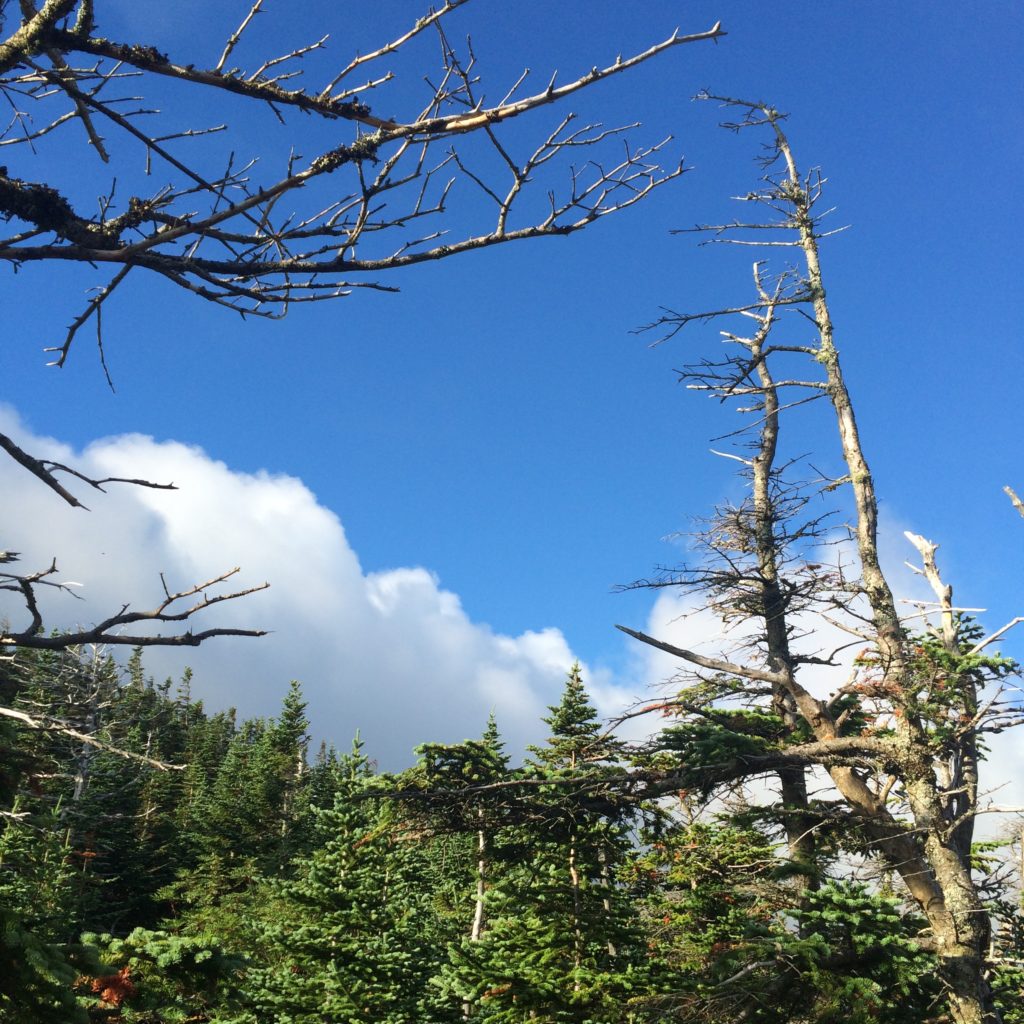 But, there was this – at about 4000 ft – some kind of thermocline and a cloud bank. We were marching right into it! 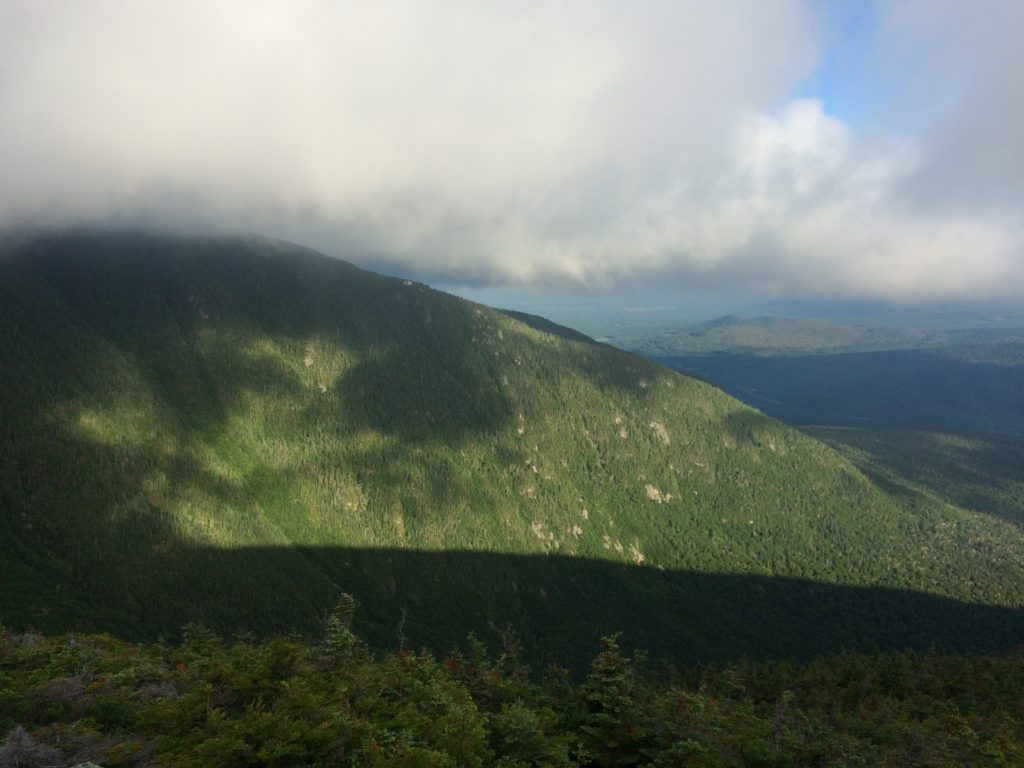 One of the crew was Casey Townsend – I’ve known Casey for about ten years. We have hike a lot over the years but not recently. He still lives in Boston, from Wyalusing Pennsylvania. Once upon a time I hired him and he was my right-hand man running a small org. He is still in the community education field. He’s one of those people you would want to work for, if he had such a need. Or go into battle. Solid guy. 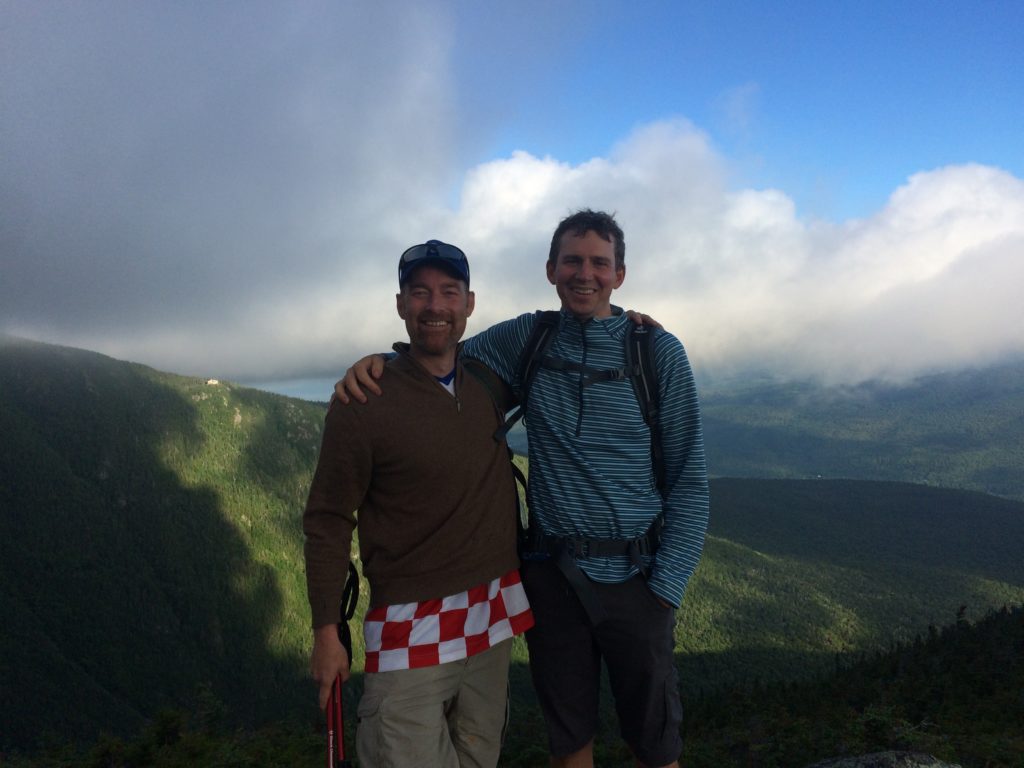 This is looking across to the east, the other ridge coming down Madison.

Corey was not too thrilled about heading up into the moisture. Adams would be straight up this ridge, going to the right. Ben was just going to keep troopin’! 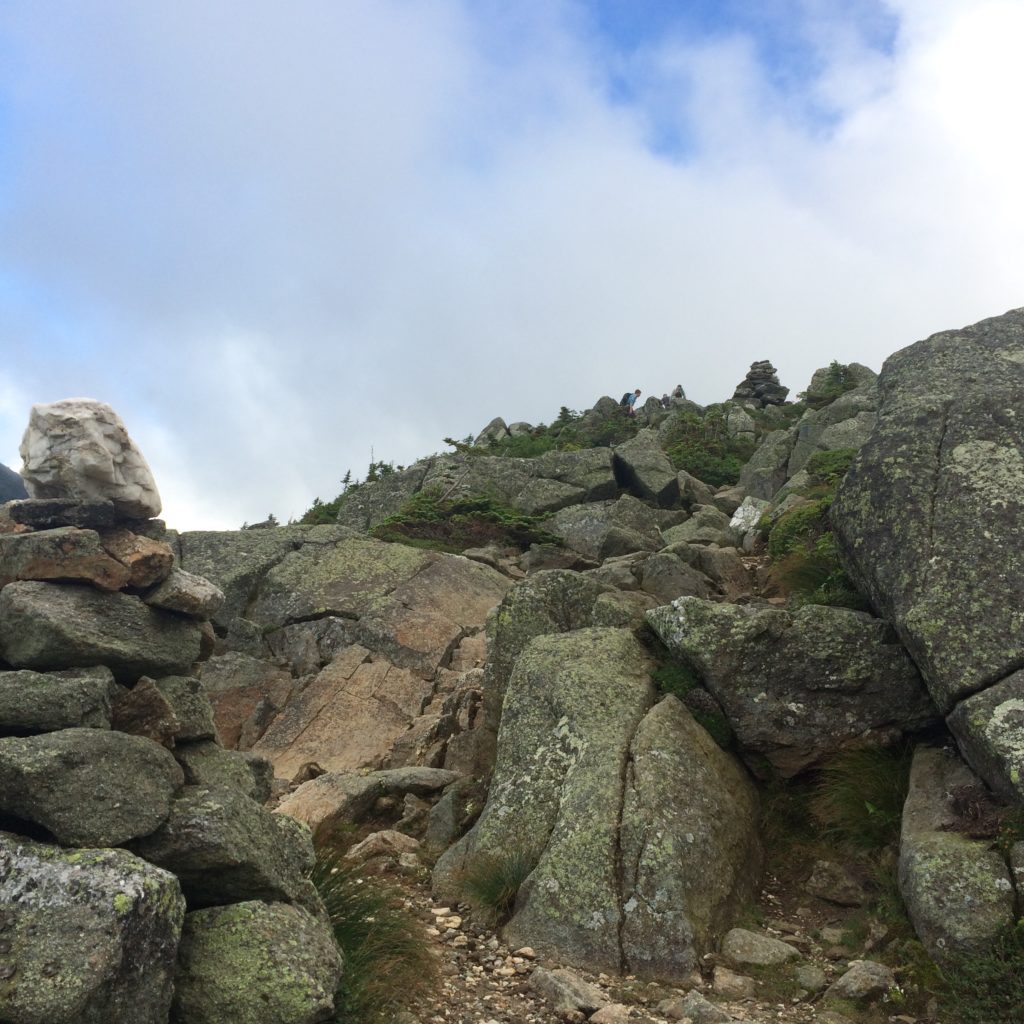 Well, that trail led to Madison Hut – in the col between Madison and Adams. It’s a great approach on that ridge generally, really lovely rocks and interesting stuff, up and down.

At the hut we ate a little. We were kinda soaked from all the moisture. Some of us decided to head up to the top of Madison. I hadn’t been up there in at least 25 years. 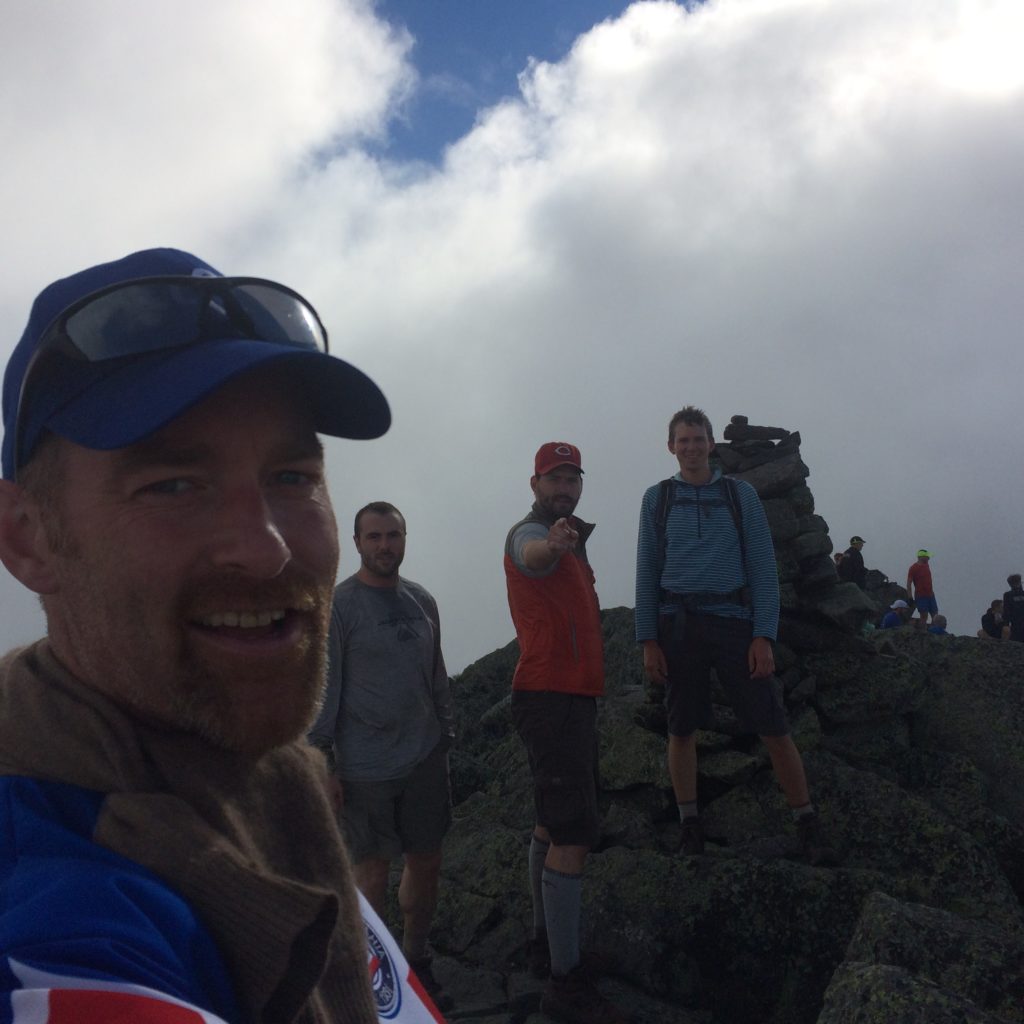 Wafting through – fast. It was powerful. To be on that peak with the mix of light and visibility. One moment totally socked in, the next, with fragments of vista. 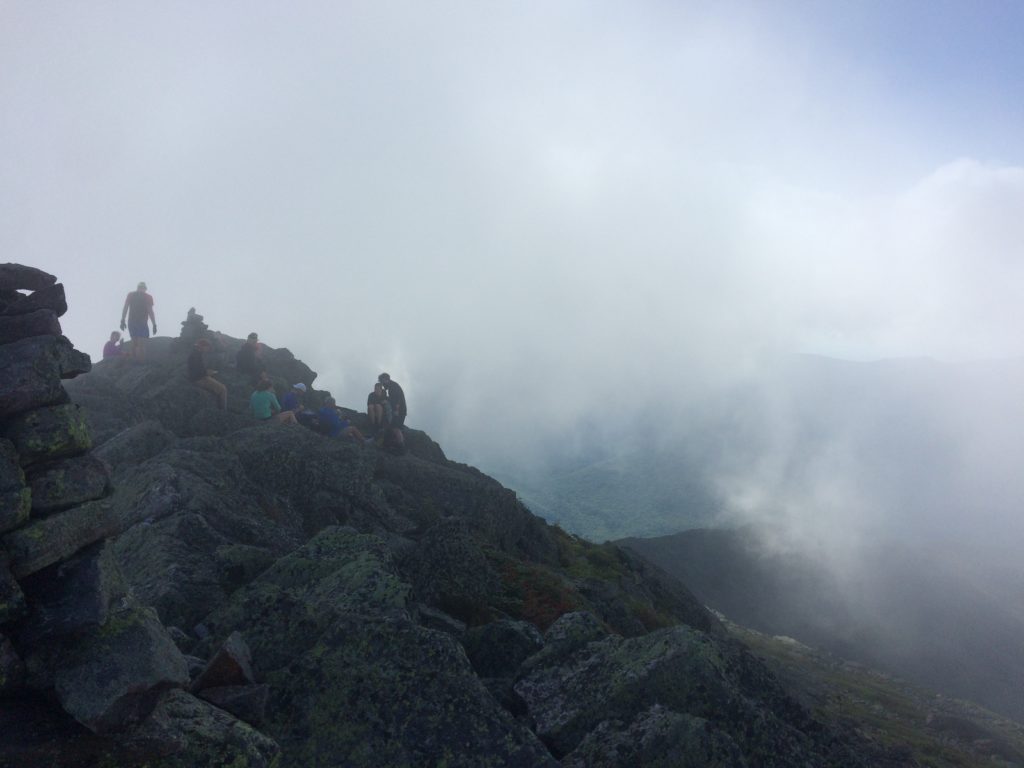 Suddenly the whole fabric peeled back and we were on the top in the most brilliant light!

I hollered over at the folks on the true peak – they hooted back and waved. It was pretty cool to watch the cloud bank just roll out to the east toward the Carters…super chaotic and amazing! 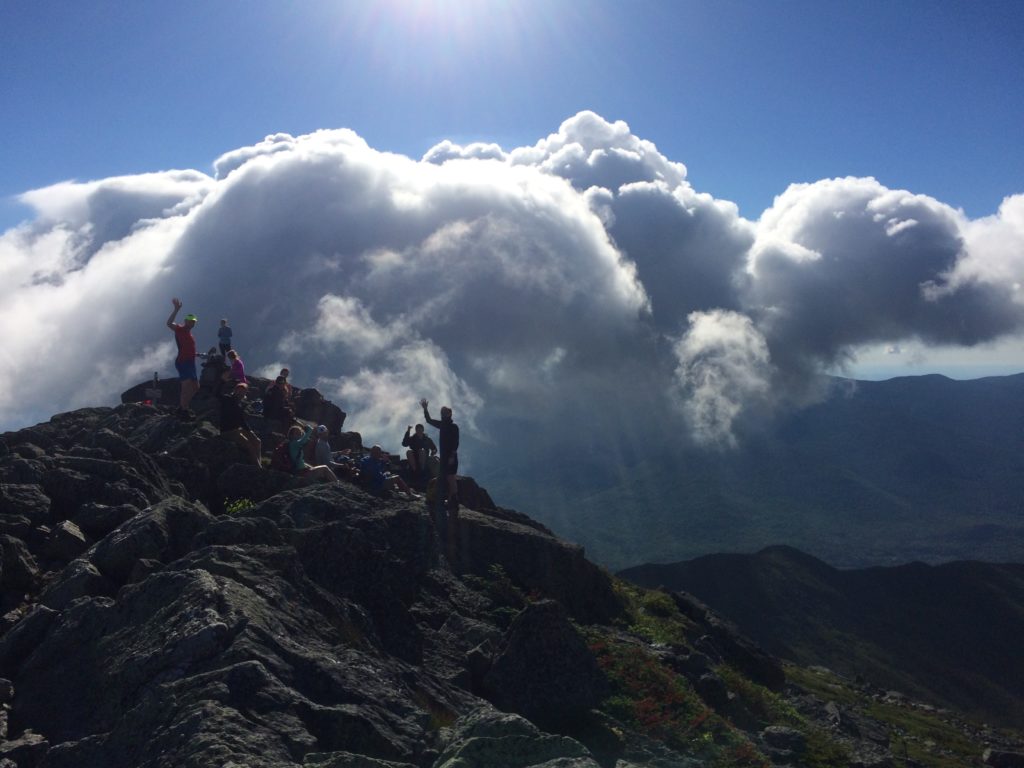 Then to the west, there were more clouds. This was just a special treat.

Below is the “Star Lake” – a little pond near the Hut. That would be Adams Peak straight ahead. 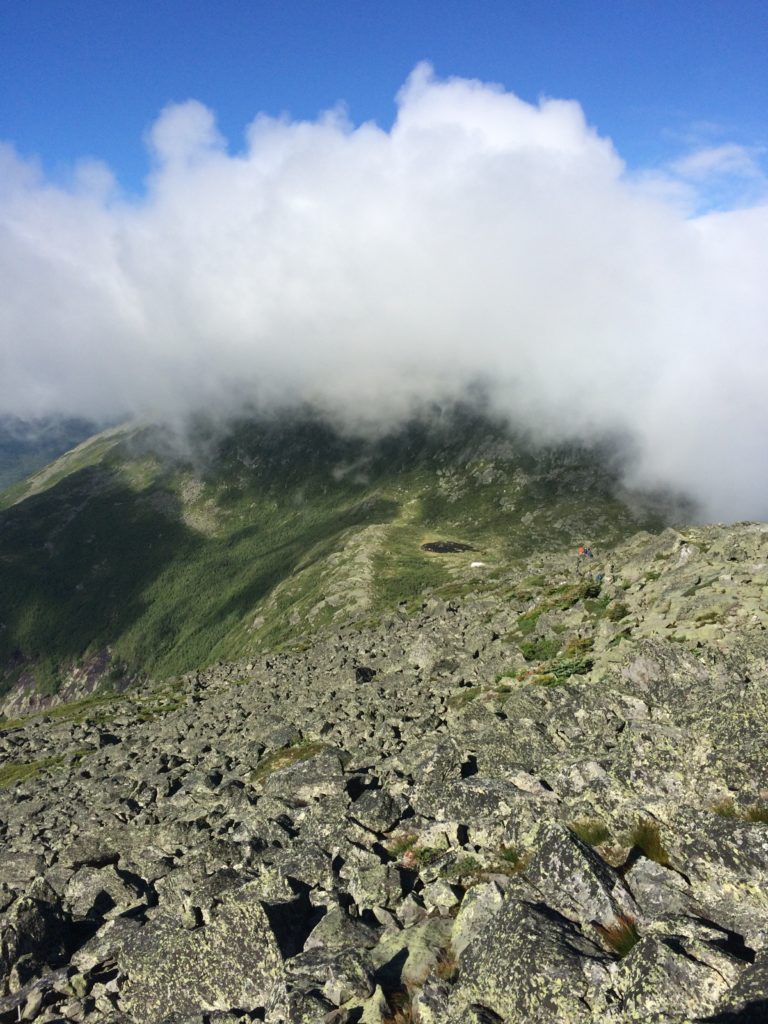 There it is – the summit peeking through. One of my old friends, that Adams Summit. Been there many times. About once a year. It’s the tallest peak around which is a real mountain peak without what you find at Washington…

I was pretty happy in the sun on the top of Madison though, on this particular morning. This is about 8:30am at this point. 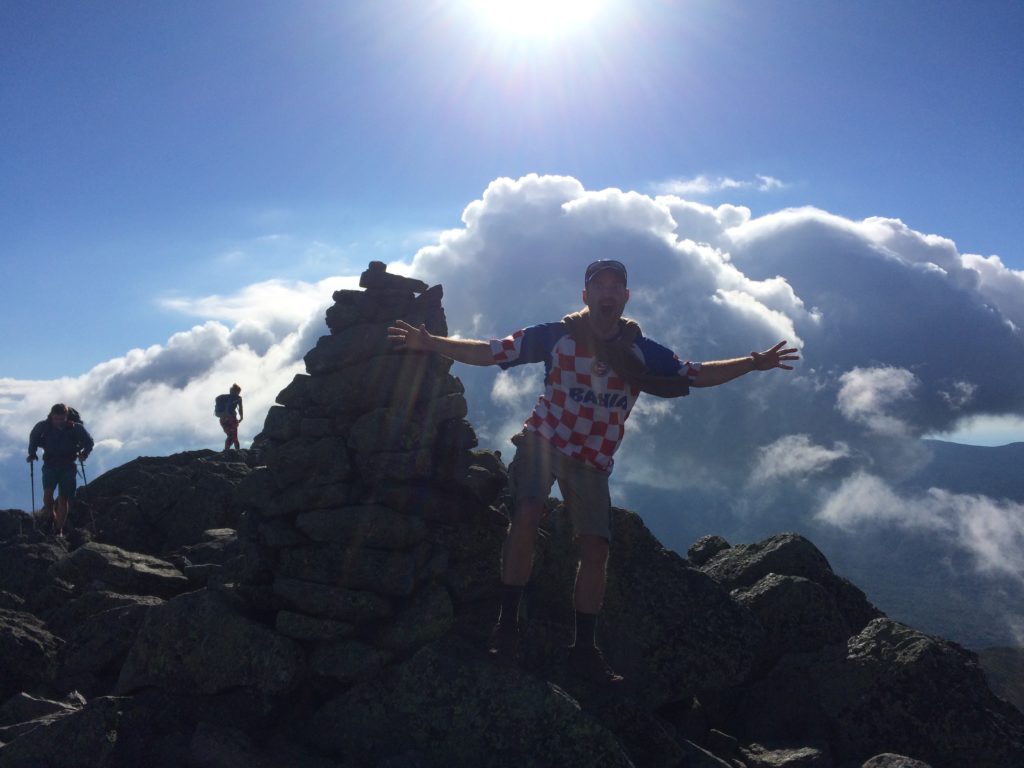 And then we headed out to the West. That is Washington in the distance (you can just make out the road on the east (right) flank), the Great Gulf in the mid-ground, and Adams on the right. Everyone seems to be wearing clouds this day. I’m rarely on Madison to get this angle – you can’t even see Jefferson or the southern Prezzies from this perspective. 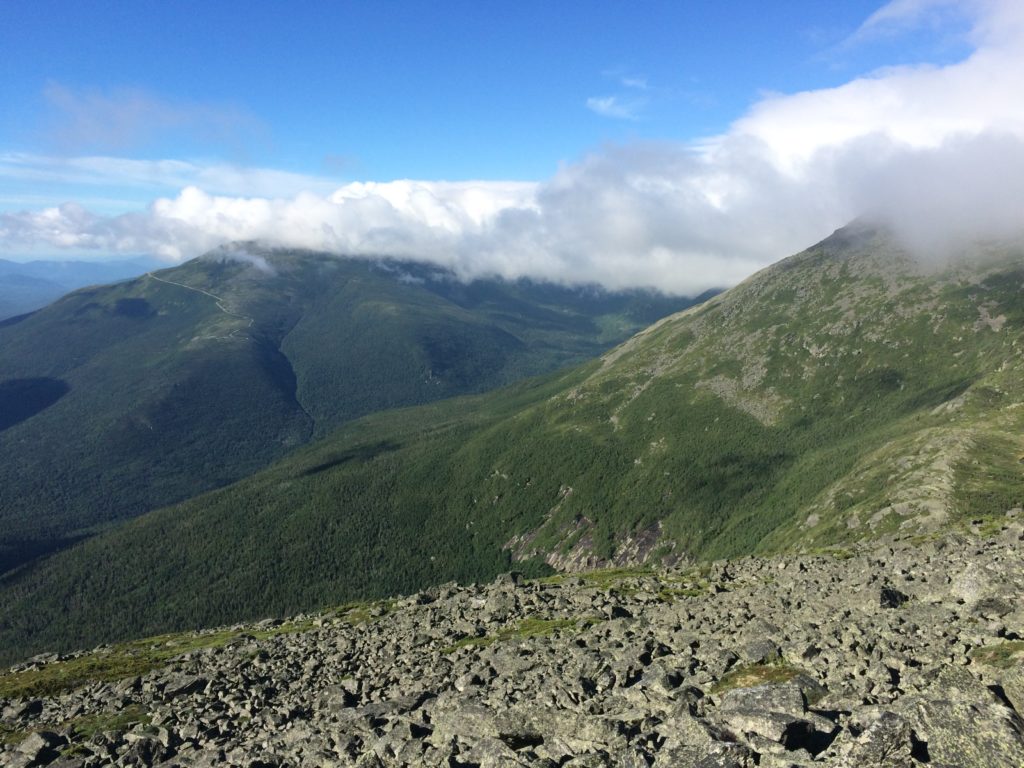 Now we’re heading up the rockiness to Adams. Love this trail. It’s steep. Makes you really feel like you’re in the mountains.

Looking back at Madison. This cover of clouds was like a too-heavy duvet all day. 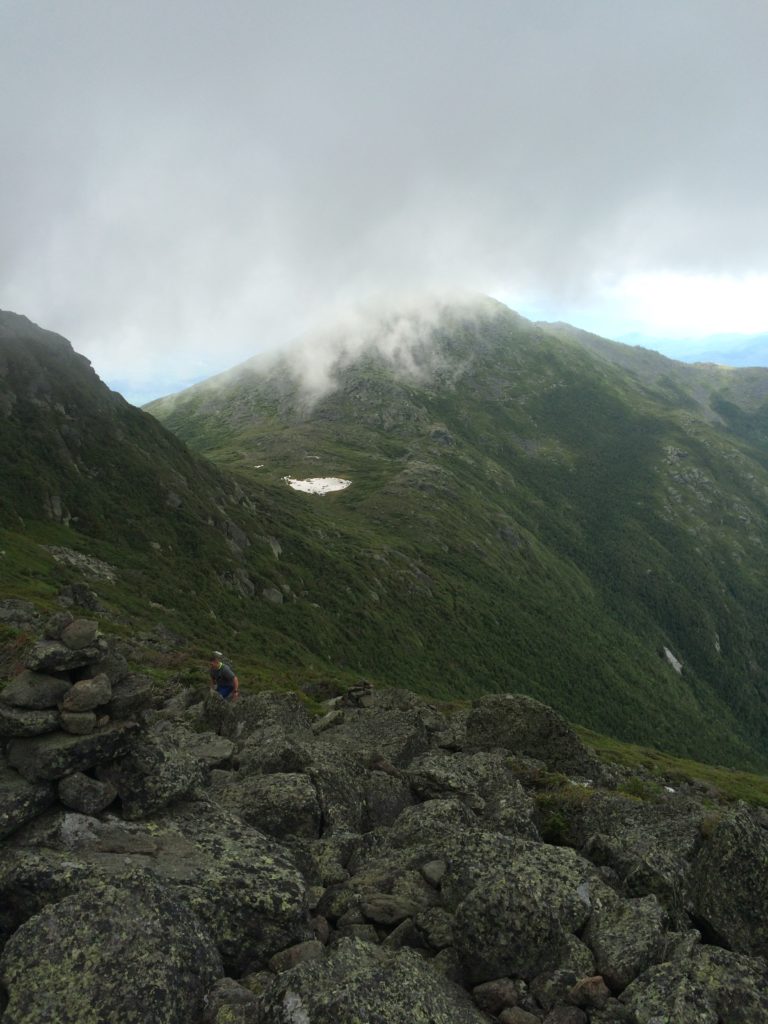 My favorite summit. Not due to the view. 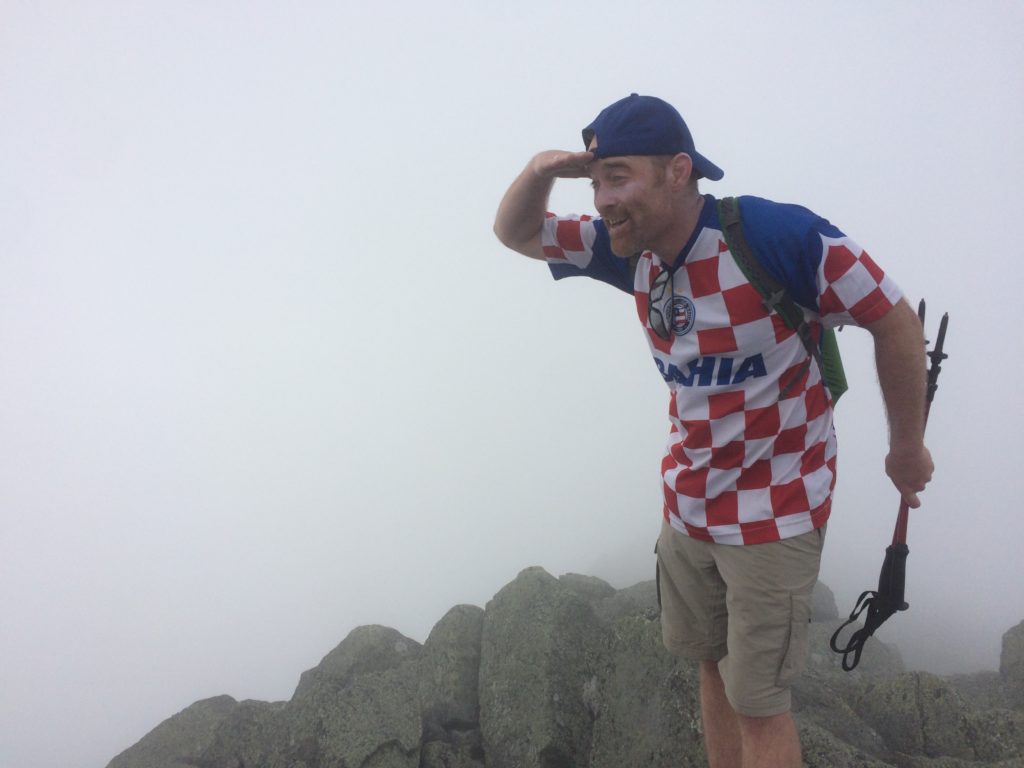 I started looking at the stuff around my feet more.

This area is the Monticello Lawn – a high alpine area here between Adams and Jefferson. Great stroll through the height. Always want to spend more time here. 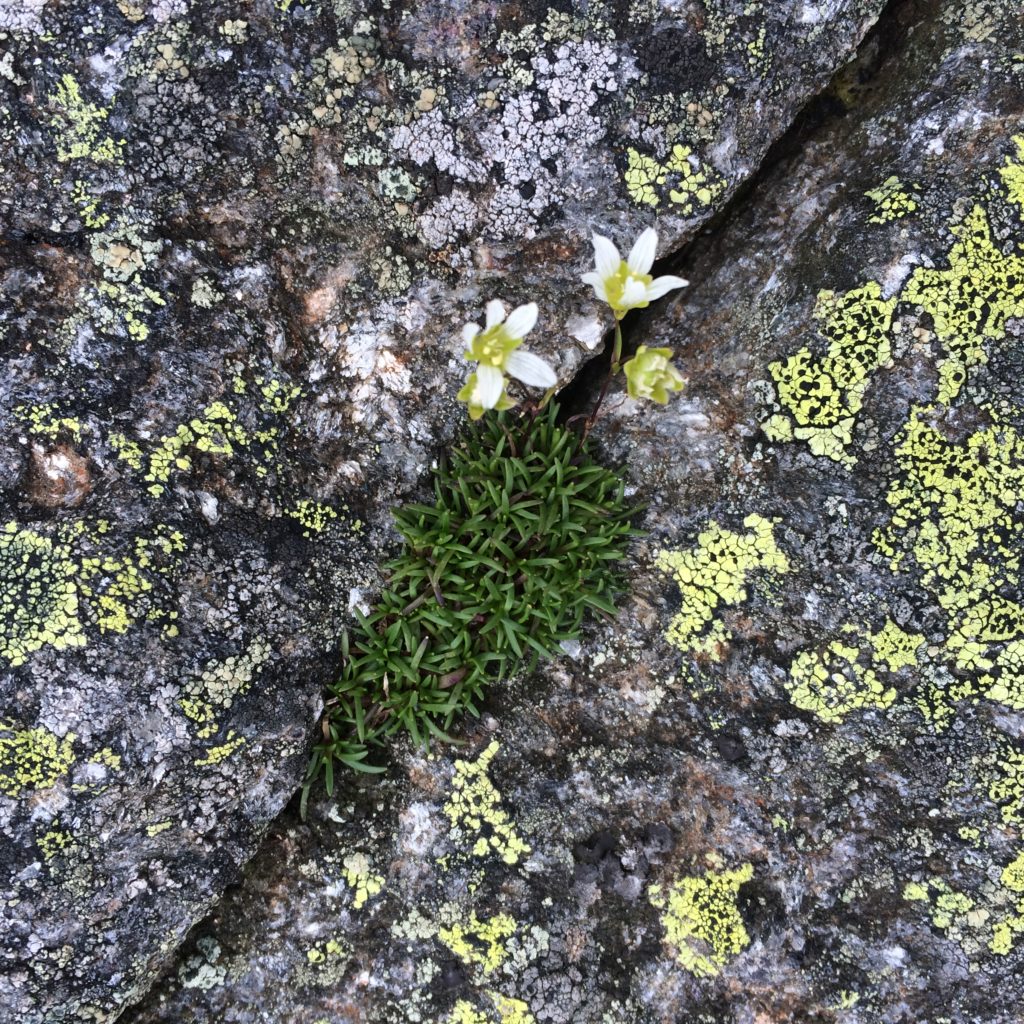 Not much laterally though. Kinda neat how some of the tors and erratic giant boulders would loom out of the mist from time to time. 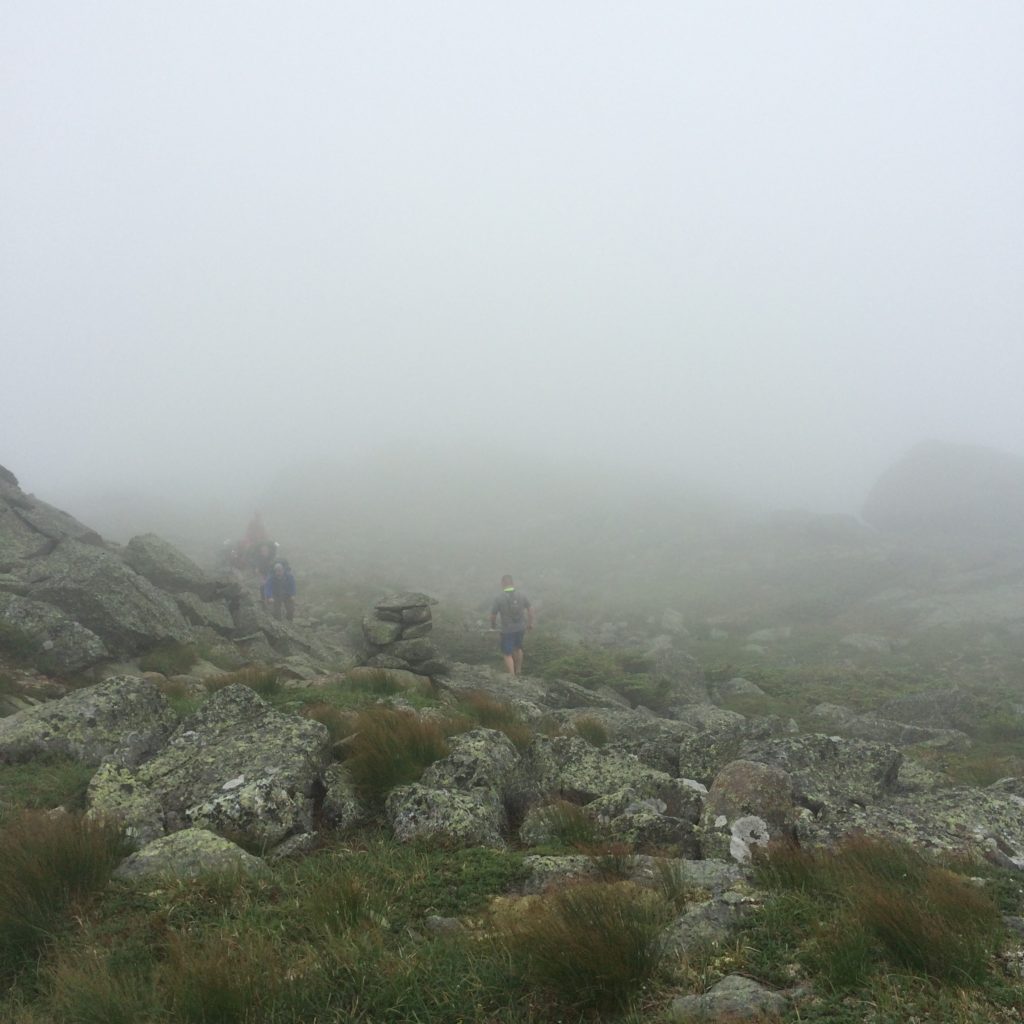 And here we are on the beautiful summit of Jefferson. Shawn was not exactly thrilled. Corey was making the most of it. Casey was not paying attention to the photographer. 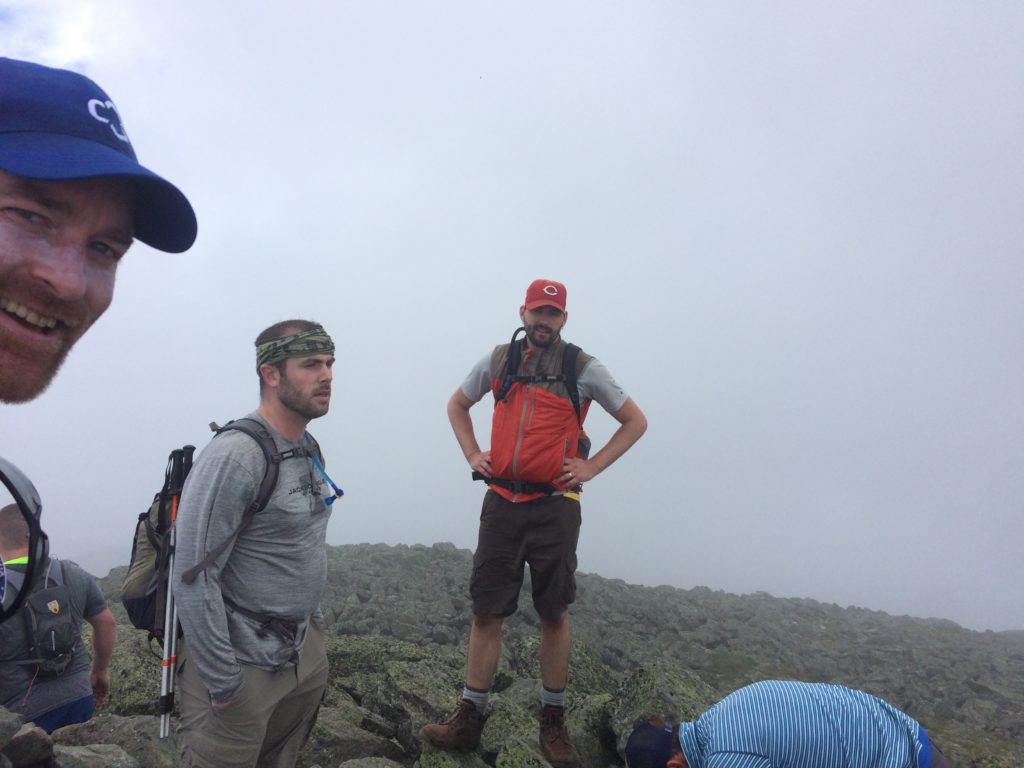 But I mean, it was modestly awesome, still. To be up there. Almost flying. 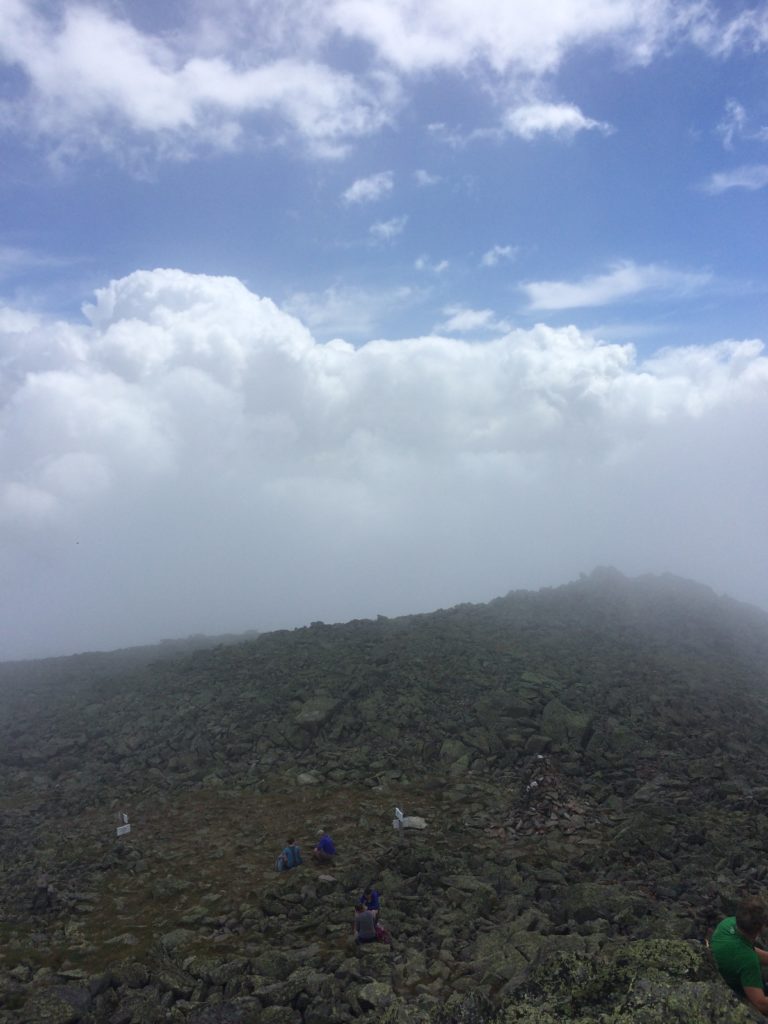 That was it though. I had stopped taking pictures!

We didn’t summit Washington, just kept going. Did go up Monroe as that is quite a cool little setting up there. Then Franklin and Eisenhower. Coming off the last one we finally got below the cloud and that was delightful.

There was a lot more to the hike – some great conversations, entertaining tales and silly jokes. Made it down, that last three hours after Eisenhower without total cramping and delirium. Got back to the cars mid-afternoon and decided to drive back that very night.

Actually seem to recall a stop at a diner and a few chuckles there with more high-protein/high-lipid plates ordered. [Corey – send me that pic with me and that chef hat!]

See you next time!