I just had one of the best days of my life. My heart was singing.

I was surrounded by hundreds of people who were recently selected to participate in some form of public service training at the Harvard Kennedy School.

I am excited to continue my work to improve the sustainability of the built environment, and with that, participate in increasing justice and peace in the world. I know I have a bit of a “save the planet” theme, but I have matured to know there is more to it – the world is not out there to be saved, and the people who are the world are the larger part of the thing I care about. It is complex, but it is also simple: if we all were more gentle, things would be better. How can we do that? Well, I think adjusting the way buildings happen could be a part of the change. And I enjoy working in the space of buildings and real estate.

I look forward to continue my growth as a practitioner and leader to facilitate change for the better. I feel lucky, blessed and destined to be tapped by Harvard to join their ranks and become better at what I do. I feel a tremendous responsibility to work hard this coming year to become a more powerful change agent.

It was delightful to be surrounded by so many others who must feel something similar to what I feel.

And we were called to public service repeatedly by the speakers on the day.

So I wanted to share a few of the photos I took and I will be keeping you all up to date on my academic journey.

It was a fine Friday morning as I walked from my house, the Cambicoop, across Harvard Square to the Kennedy School. A breakfast was awaiting at the Charles Hotel Ballroom where we would first convene. 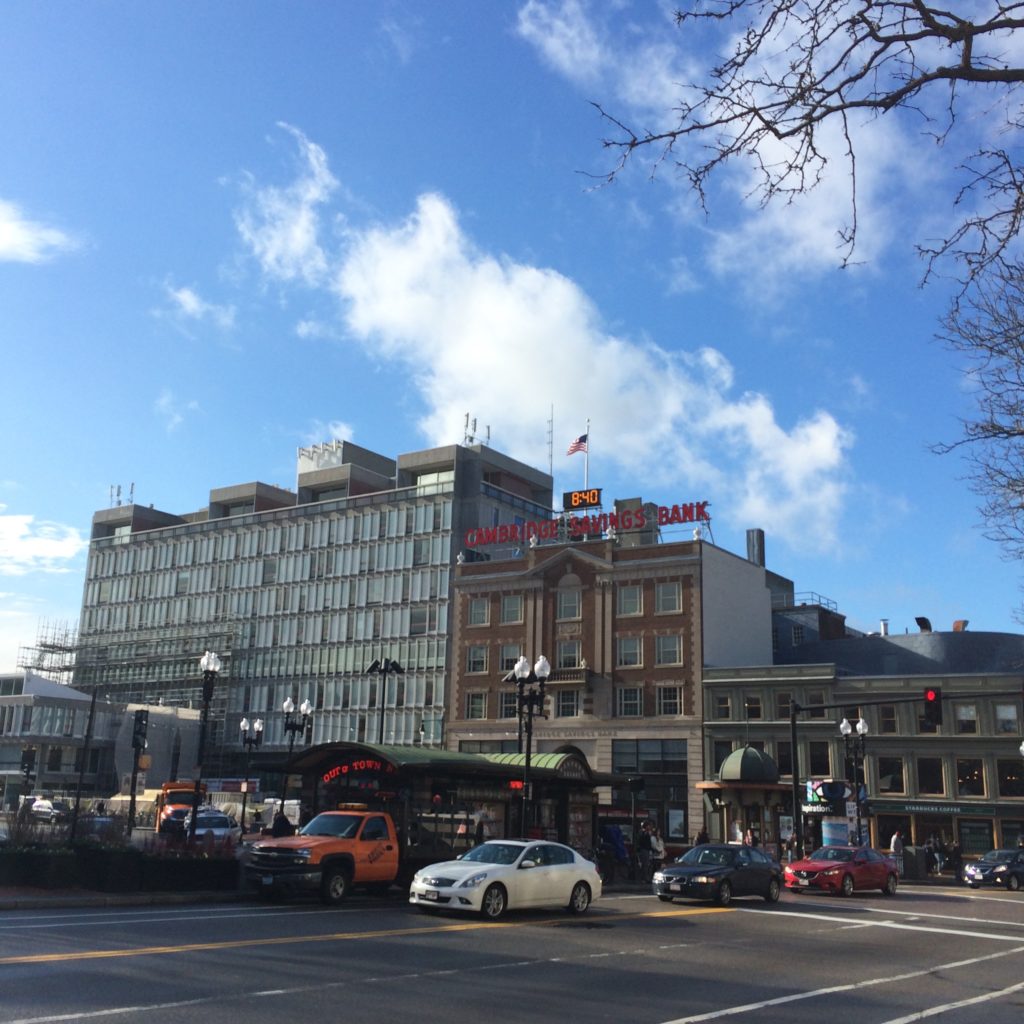 On the way, at Brattle Square, my eye caught a little lucky penny on the bricks. Super lucky as it was a copper from 1944. What facilitated this penny arriving on my path on this morning? 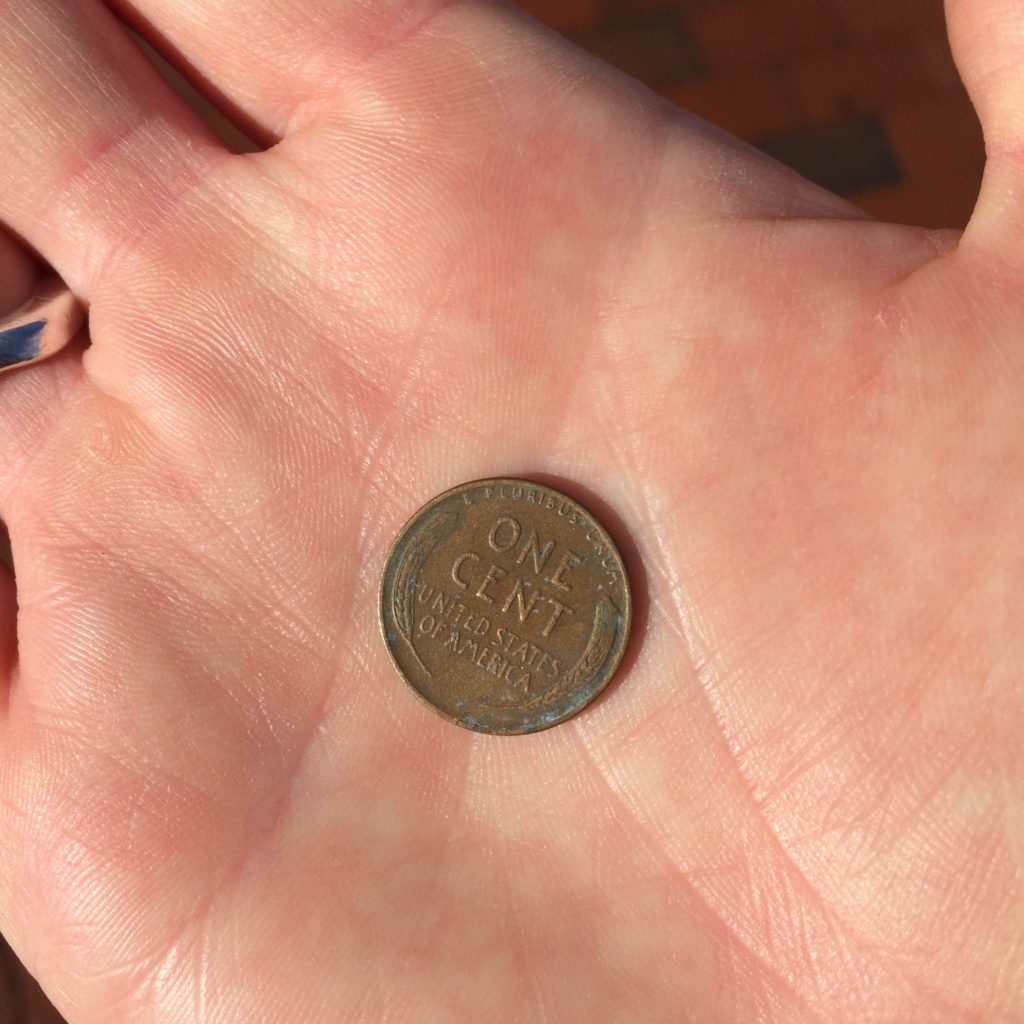 Here’s the Charles Hotel. One of my favorite mixed-use projects from the 1980’s. It was the site of the old MBTA (well, it was MTA at the time) trolley yard. When the Red Line expanded to Alewife, it became a developable lot – this and the Kennedy School came out of the shuffle. I would like to learn more about this project. I have met the developer, Richard Friedman, at an industry event. He seems like a nice guy. 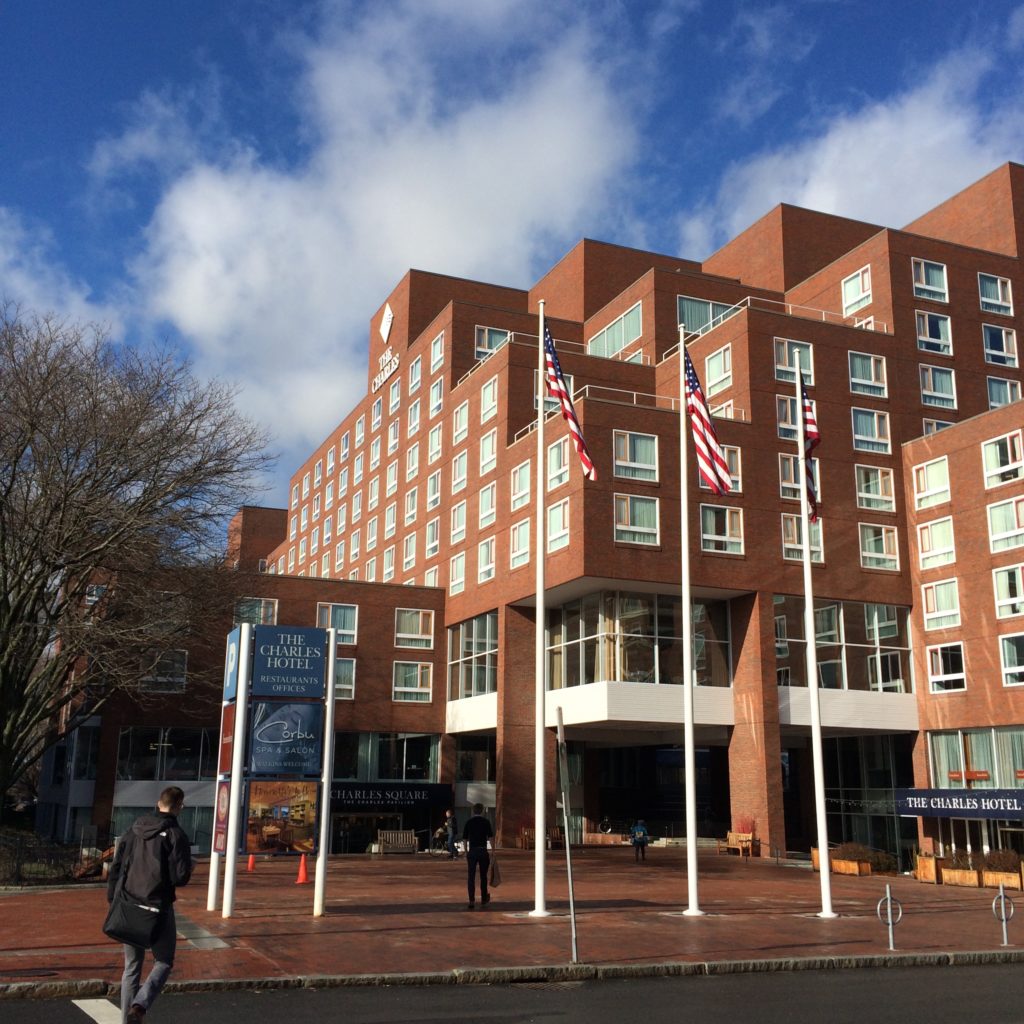 The Ballroom on the top floor was full of the different types of students. Most pertained to the two-year MPP or MPA for people who were “of traditional Master’s degree age” – like 25 as I had been for my first Master’s at LSE. Lots of very energetic people. I am not calling them kids!

I had a yellow namebadge as I am part of the Mid-Career cohort. Many of the international students were there. It was fun to hear about what and how they became interested in the program. Most (like 9 our of 10) of the US students I met were from DC. I wonder how many made the sprint from Nov 9th to Dec 1 to get all their application materials in!

Mary Beaulieu of the Office of Career Advancement asked “what is the difference you want t make in the world? People here care about solving public problems. Keep that purpose at the front of your minds.”

Tim McCarthy was a fabulous keynote speaker – he is a professor and part of the Carr Ctr for Human Rights Policy.

“You are not a mistake” was his central theme. Forget the “imposter syndrome” he exhorted us. We are here because we were intentionally, specifically, and arduously selected to be part of the Kennedy School. And while it is quite a brand, this Harvard thing, it is a tremendous opportunity. And with that opportunity, comes great responsibility.

He shared his story as a student and then academic. A telling tale of time in Alabama meeting a community and sitting with an elderly woman in a church. Taking various directions and efforts through personal and professional duress. Explaining that the answer to how he “got there” was: “through the mess.”

One of the things that he left me with, as an impression was, to come to the Kennedy School because you care about the big issues, but be here in order to discover new parts of yourself. To breathe. To take time to explore and to think outside the box. Education is an opportunity to help us live a life of meaning.

He noted one of the things we want to gain is moral courage – the skills and the network to take risks that matter. He noted the quote of Paul Tillich: “Power is the means by which love can achieve justice.” He was absolutely inspirational and I’ll need to spend some time with him.

He also encouraged us to take our professors to lunch! 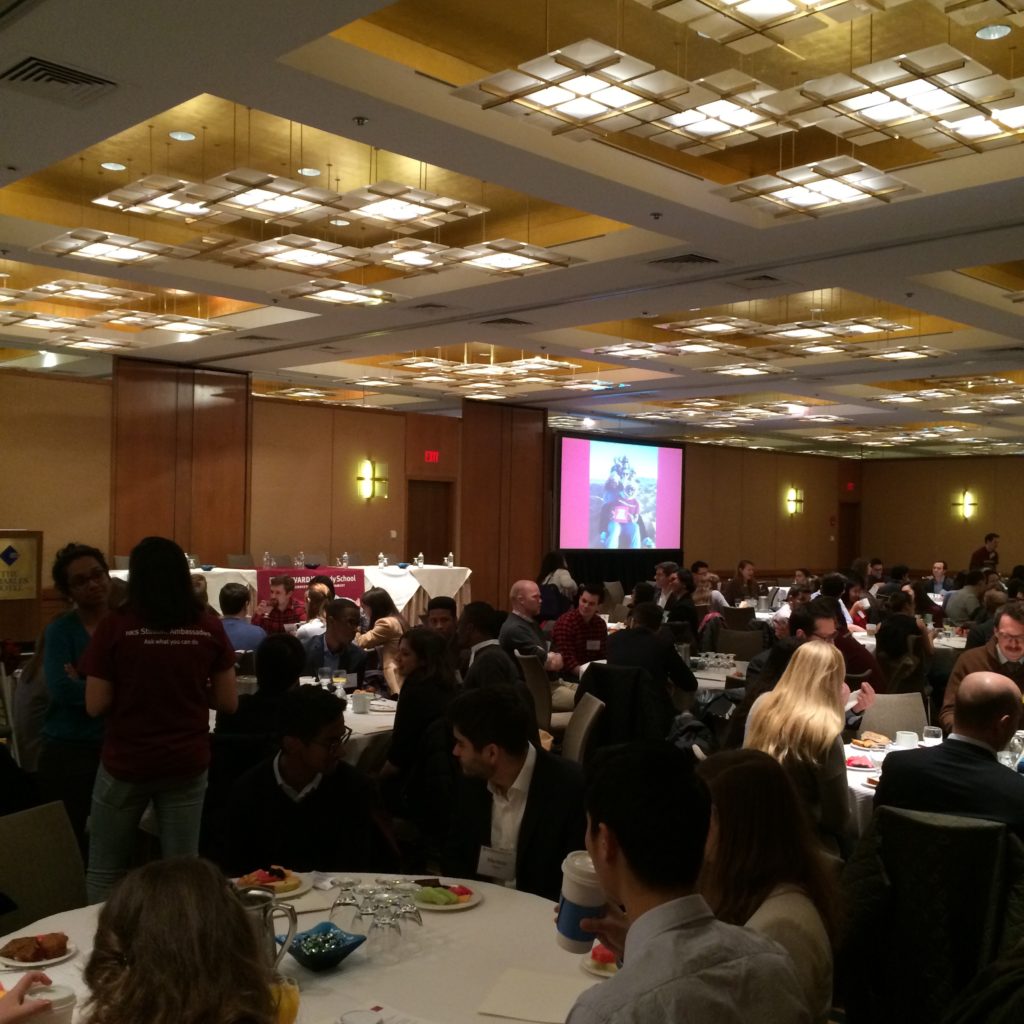 We broke out for various sessions – as MC/MPAs we left the hotel and went over to some of the HKS buildings. We had a seminar on diversity and thinking from different angles. Prof. Livingston (I believe) shared a story of social networks and one about a collaborative project – using the Old Mutual Building in Zimbabwe as the example – this is where the built it to emulate a termite mound’s natural air-cooling. Perfect example for me. #MoreGreenBuildings! 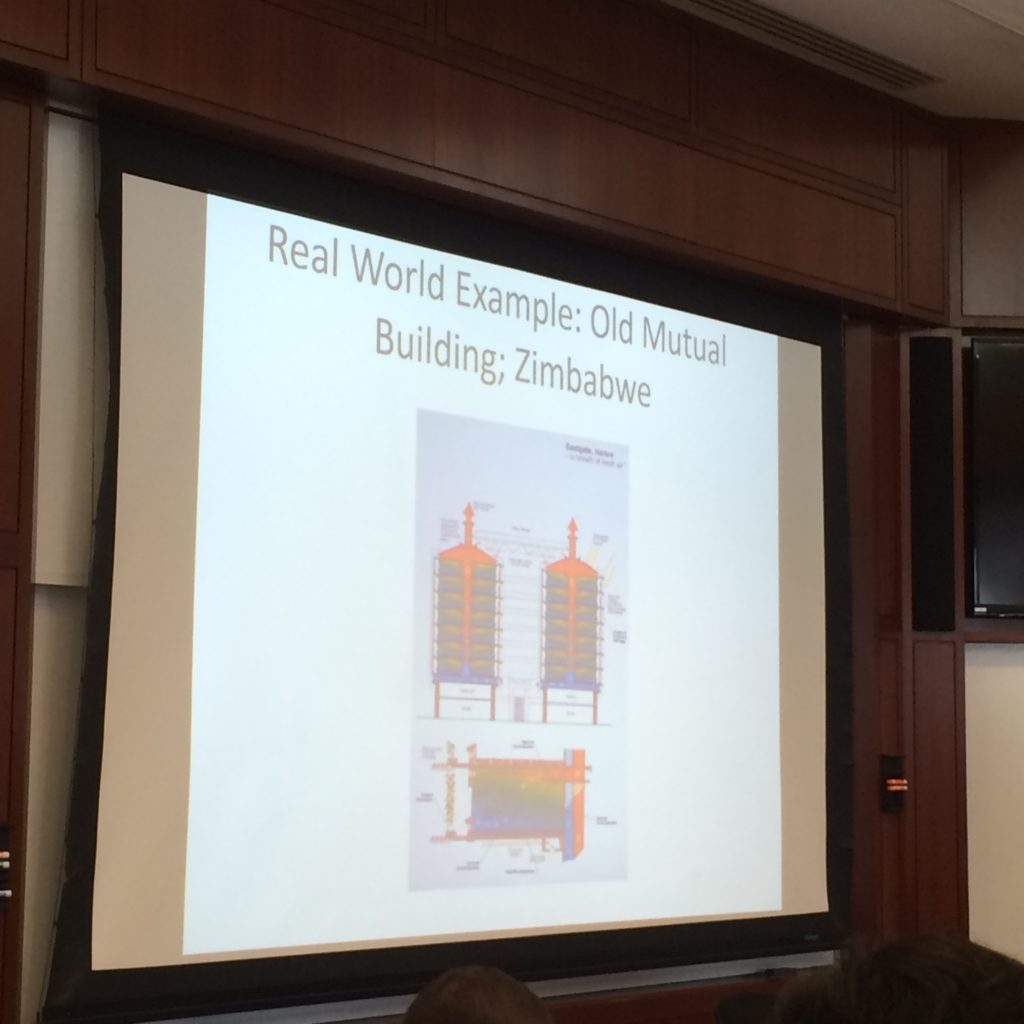 Great group of people. We had an exercise to identify a famous person, and then to see if we could be a certain degree of distance from them. Some of the colleagues worked in journalism in Geneva, or for the Chief of Staff of some entity – so all the celebrities, the Pope, Vladimir Putin, Aung San Suu Ki, you name it – were literally one or two steps away. It was fun to hear and think about. 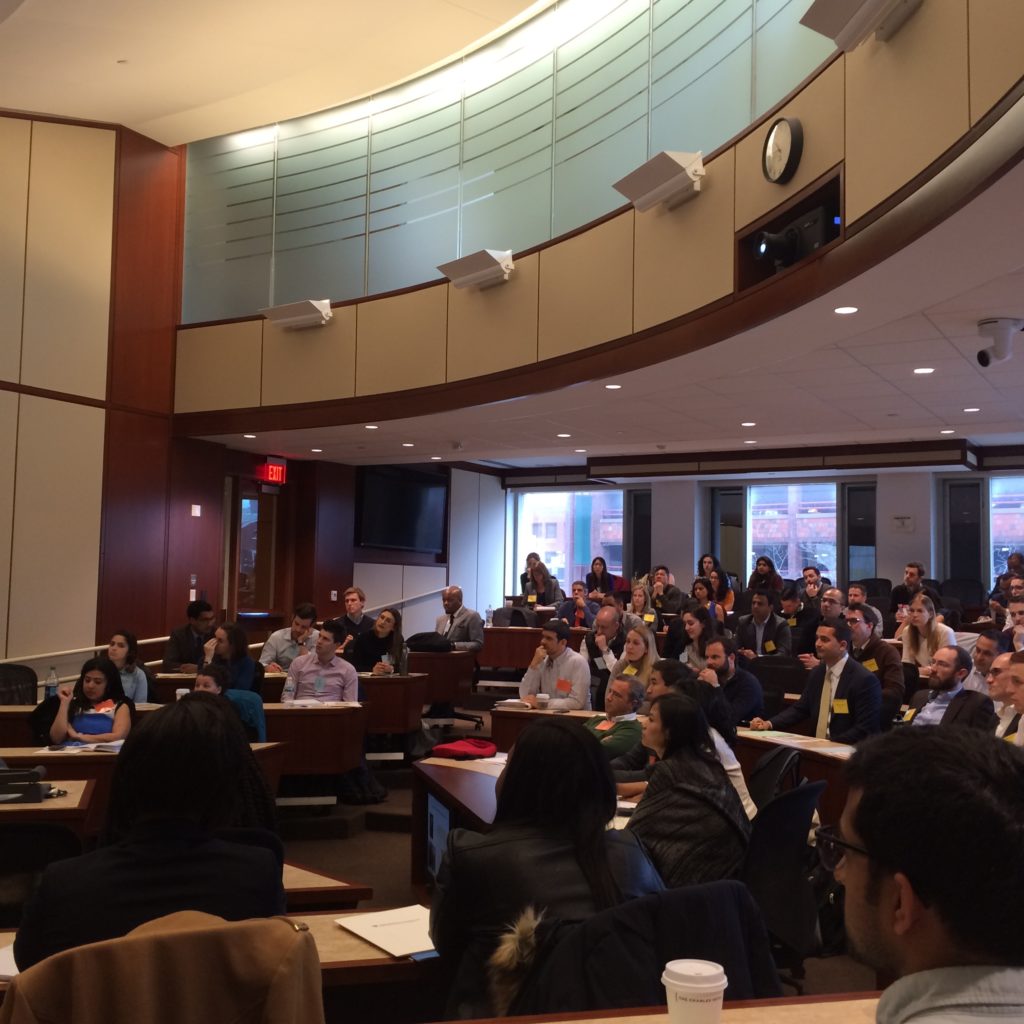 The buildings are in the middle of some major renovations and expansion. I’ll have to read up on it. I know it’ll be GREEN! 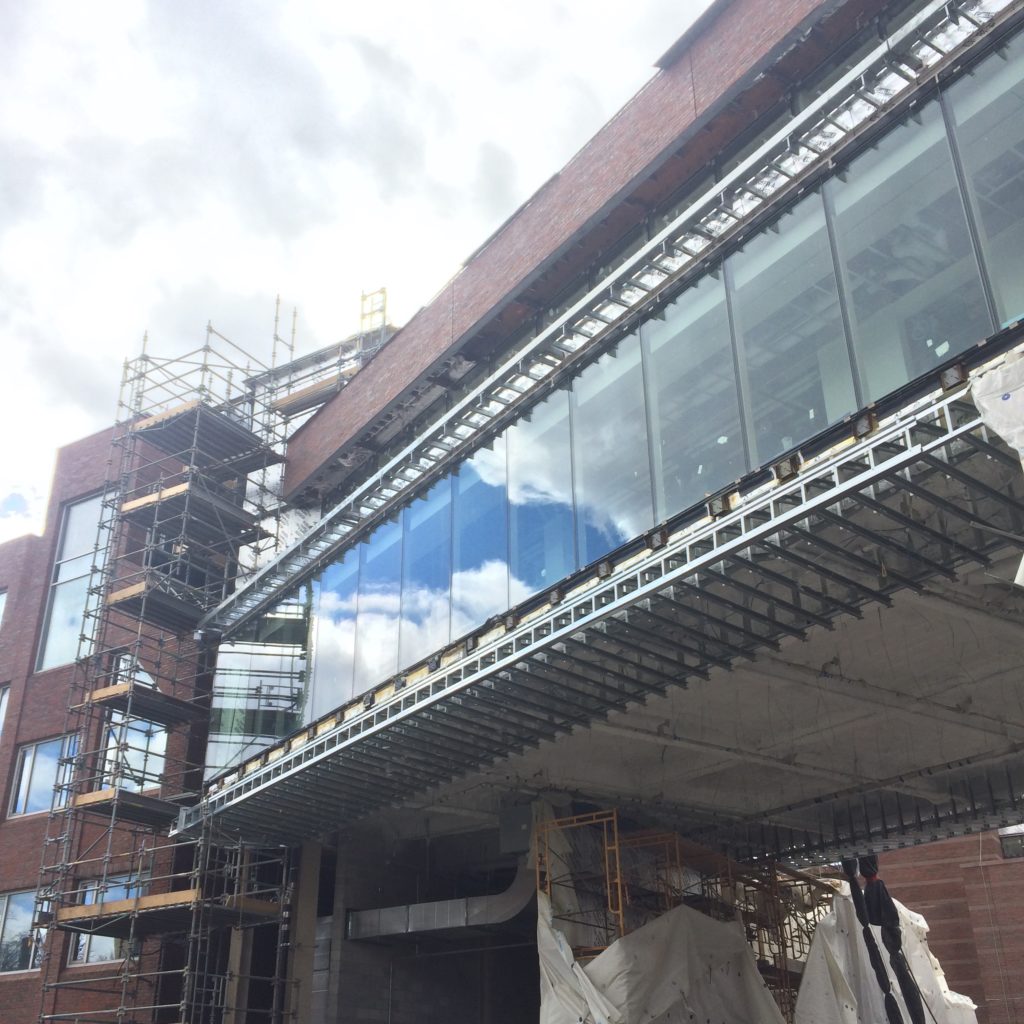 One of the sessions outlined the year. It is only one year. Woah.

Earlier in the day, I took a break to meet with Rand Wentworth. He was on the selection committee and is the Senior Fellow for the Bacon Environmental Leadership Program at the Center for Public Leadership. He is the former and emeritus President of the Land Trust Alliance, having lived in DC for a long time. He is now in Cambridge and serves to coordinate the Bacon Fellows. I was a finalist, but not an awardee, of the program. He wrote to me asking if he could meet with me and connect. I had a nice chat with him over a coffee in his office at the CPL. He encouraged me to connect with some of their other programs. We talked about leadership training, trial by fire, and hiking. Maybe we’ll set up a winter hike for “intensity training” this January or February. He was talking about how environmental topics and sustainability could be more high-profile and more coordinated at Harvard. There isn’t a College of Sustainability or such a thing as of now, though there are a lot of Centers for teaching and research related to environment. I also talked a little about cooperative housing – wouldn’t that be a great way for future environmental leaders to learn from each other and develop intersectionality? I know I’m going to do some cool stuff with Rand! 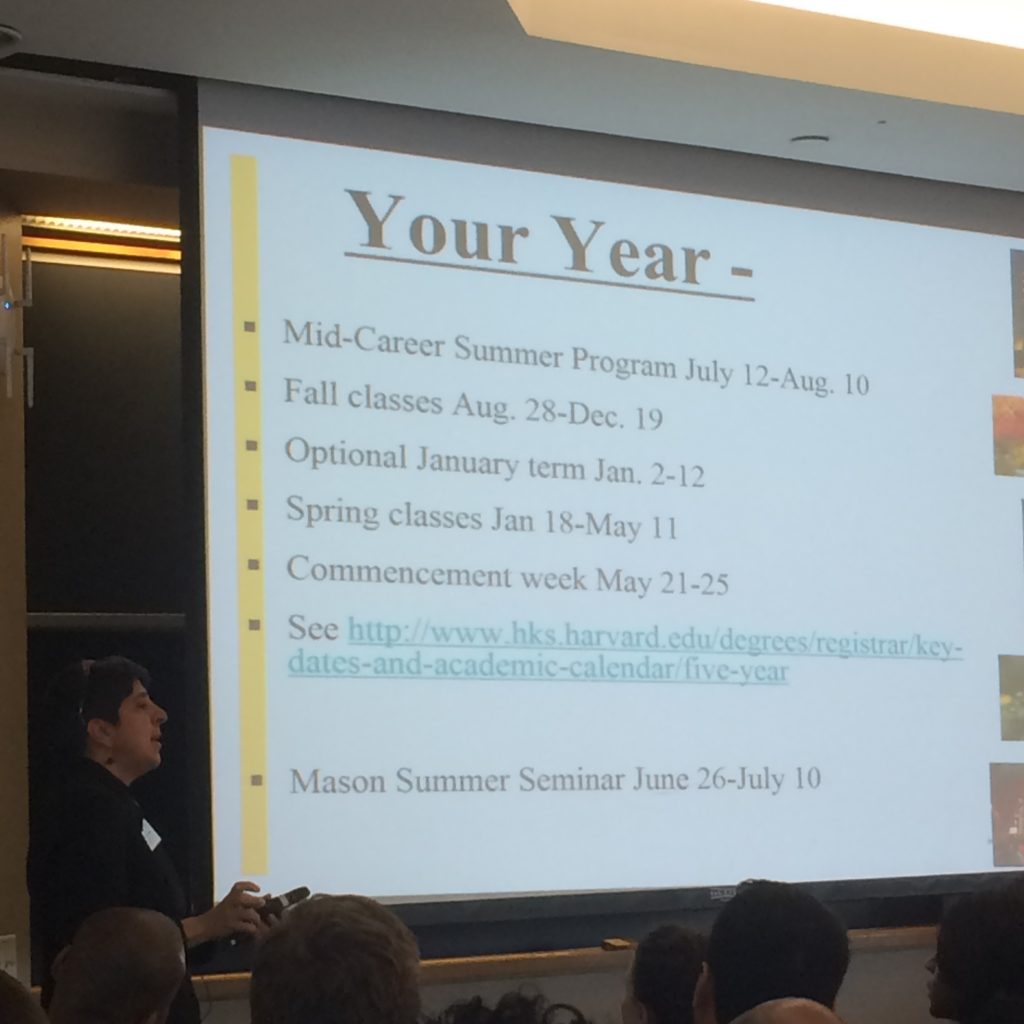 More of the project. I don’t think it will be done by July… 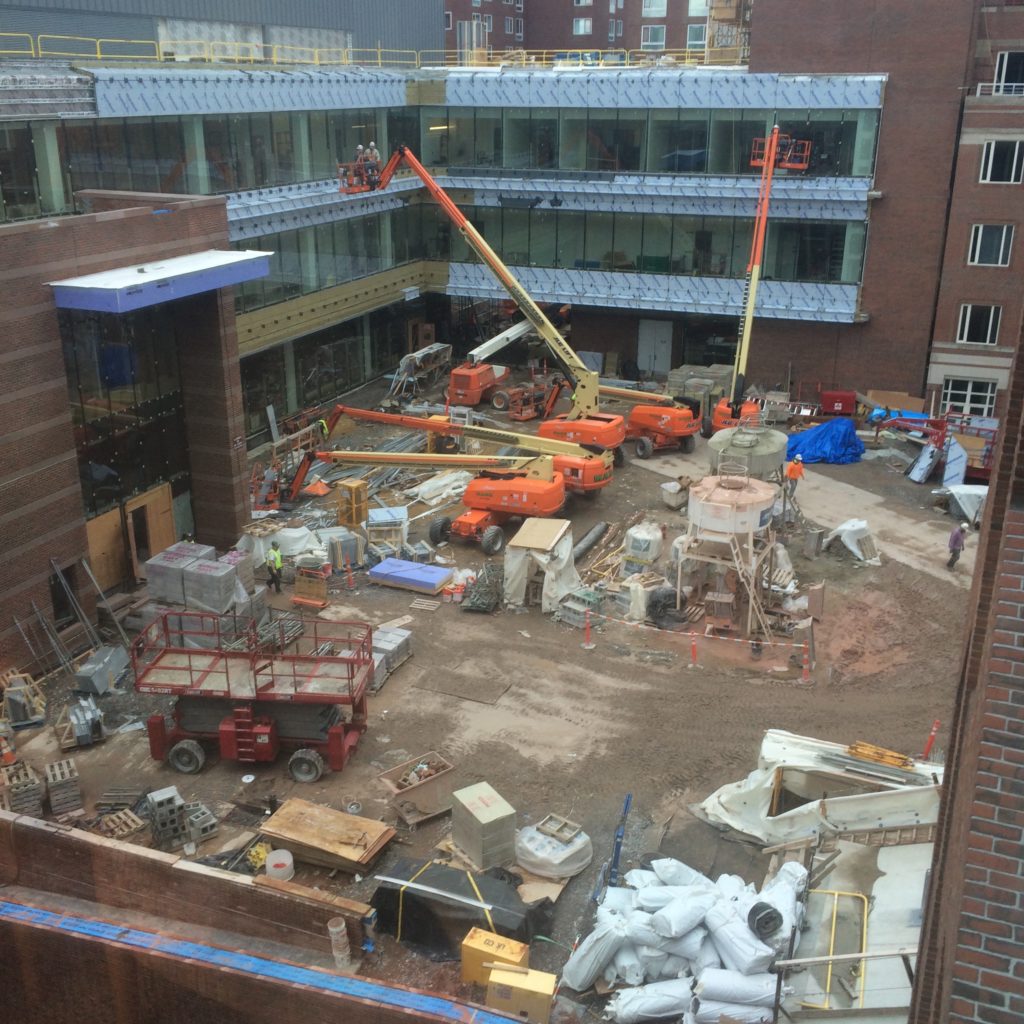 We had the first of what I expect will be many receptions, called Quorum Call, which happens each Friday at about 4:15pm. Students gather for a self-designed presentation, and somehow someone comes up with some beer or wine. It is totally something I’m looking forward to.

At this one, I noticed an older, but not old, gentleman, who seemed somewhat out of place. Possibly a professor? Well, I introduced myself and asked him what he was doing at HKS. He responded that he is John Keenan (and a light went off in my head), MA State Senator from Quincy, doing the two-year MC/MPA that elected officials can do with us. Such a cool program. I think we will have some good times coming up. 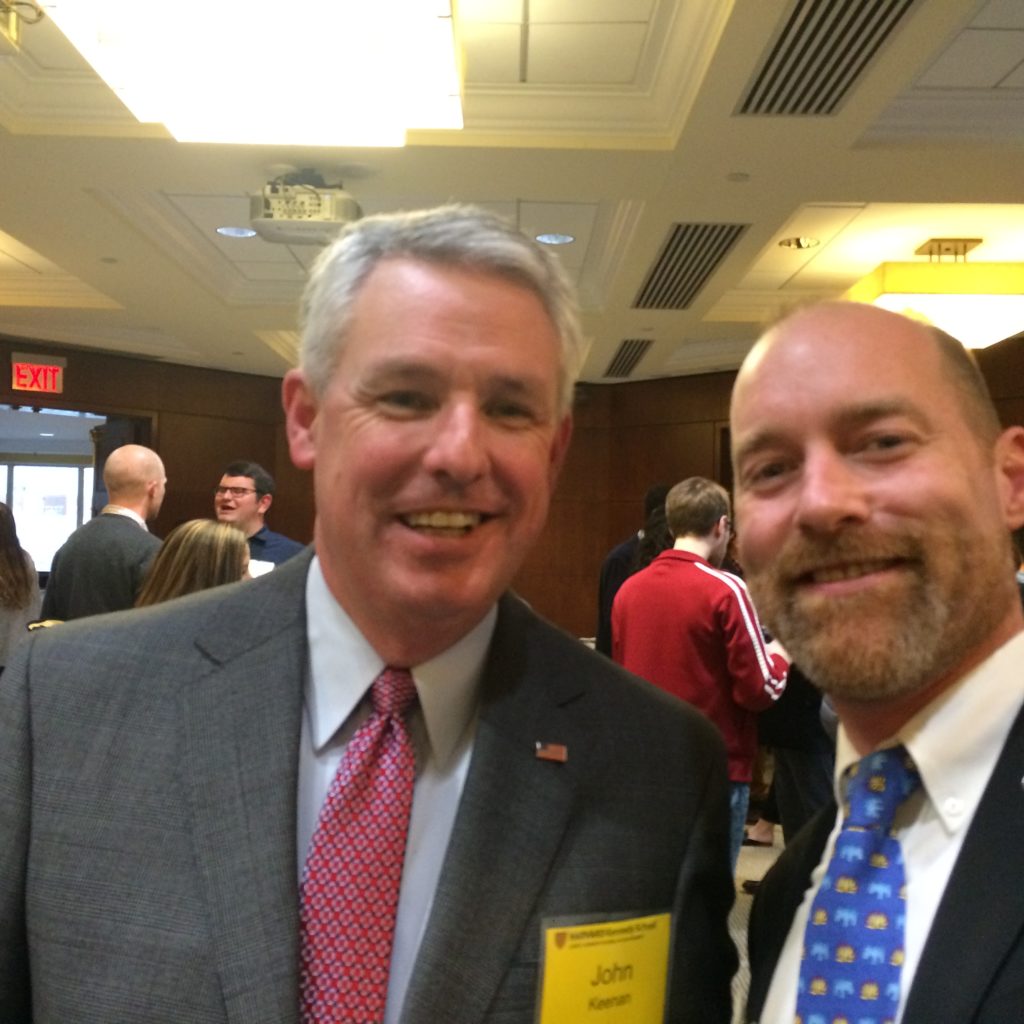 Then, I continued to do my “networking” thing. I met some people from Brasilia, Singapore, Boston, Delhi, and Tel Aviv. Also a fellow from Armenia but living in Lexington, MA. The super surprise of the day was meeting Sayaka Takahishi (below) who I had met over 25 years ago! She mentioned she was from Tokyo, I mentioned I was from around here. She asked where. I said Weston. She said she knew Weston. I asked how. Well, her parents were living in Weston in the late 80s and she graduated from Weston High, class of 1990! She had been quiet and not super proficient in English at the time, but she knew some of the kids I’d known through theater – what a small world! 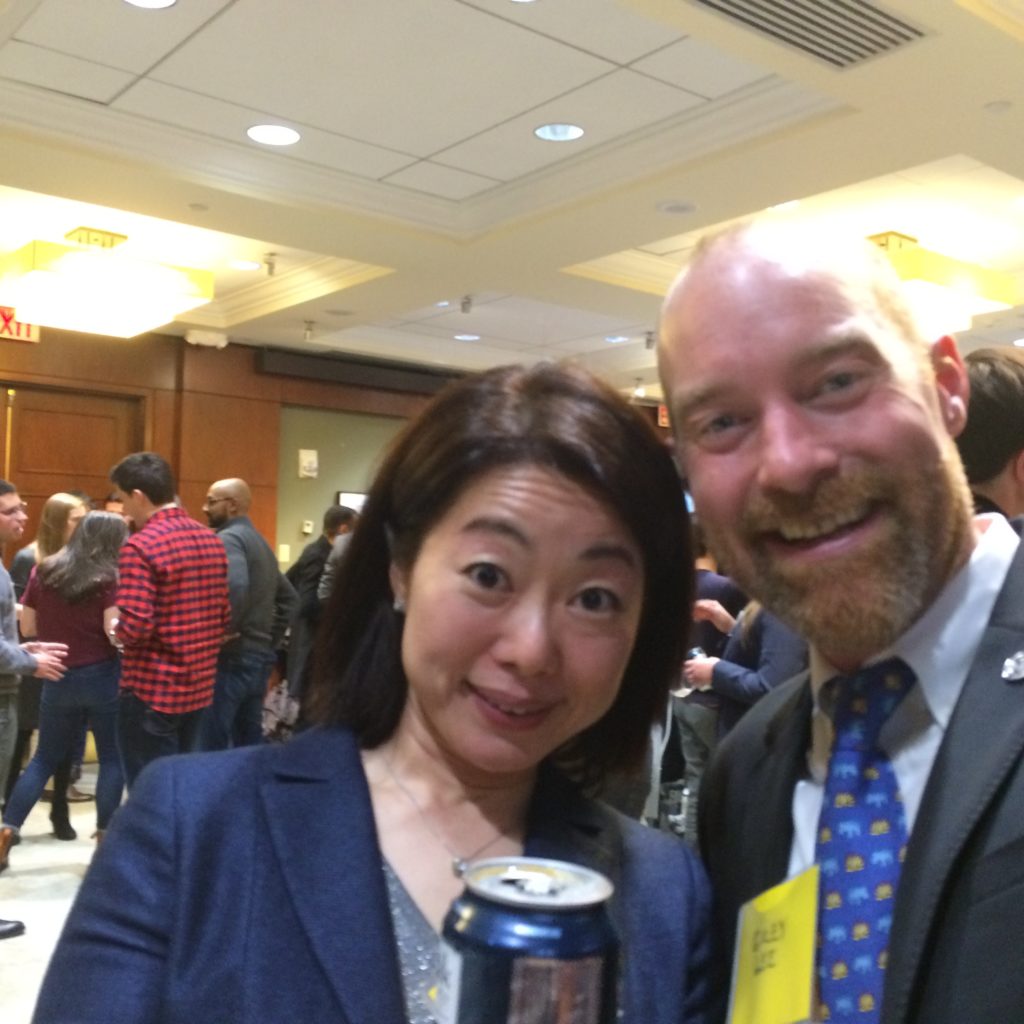 More panels and presentations. I’d gone to one with current students talking about the MC/MPA program, one about student activities, and then one presenting alumni to share “what they wish they’d known when they were coming in” – which was pretty funny. My new friend, friend of my old buddy Doug Levine (HKS ’08), Amy Davies is the senior director of the alumni relations office. She was one of the facilitators. It was nice to see her throughout the day. I had first met her at one of Doug’s parties in Wayland a few years ago and it is great to have a familiar face (and email address) at my “next big thing” – thanks Amy! 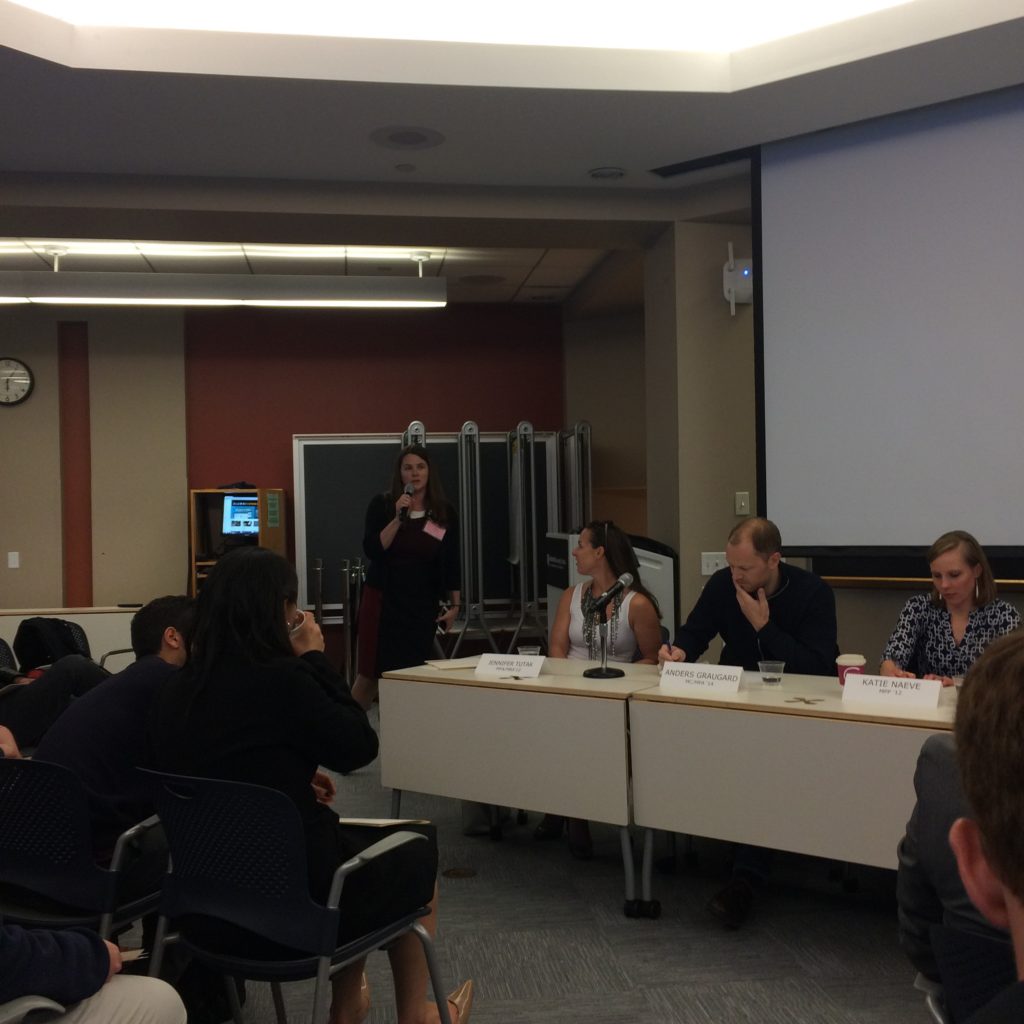 Even after a full 10h day of filling our brains with new info and orientation materials, everyone was still quite animated and ready to socialize. I was just beaming and thrilled the whole time. Just very excited to be surrounded by what is so delightful to me – sharp people talking about big subjects, eager to get to work, to connect and help each other, and to grow our capacity to make a difference! 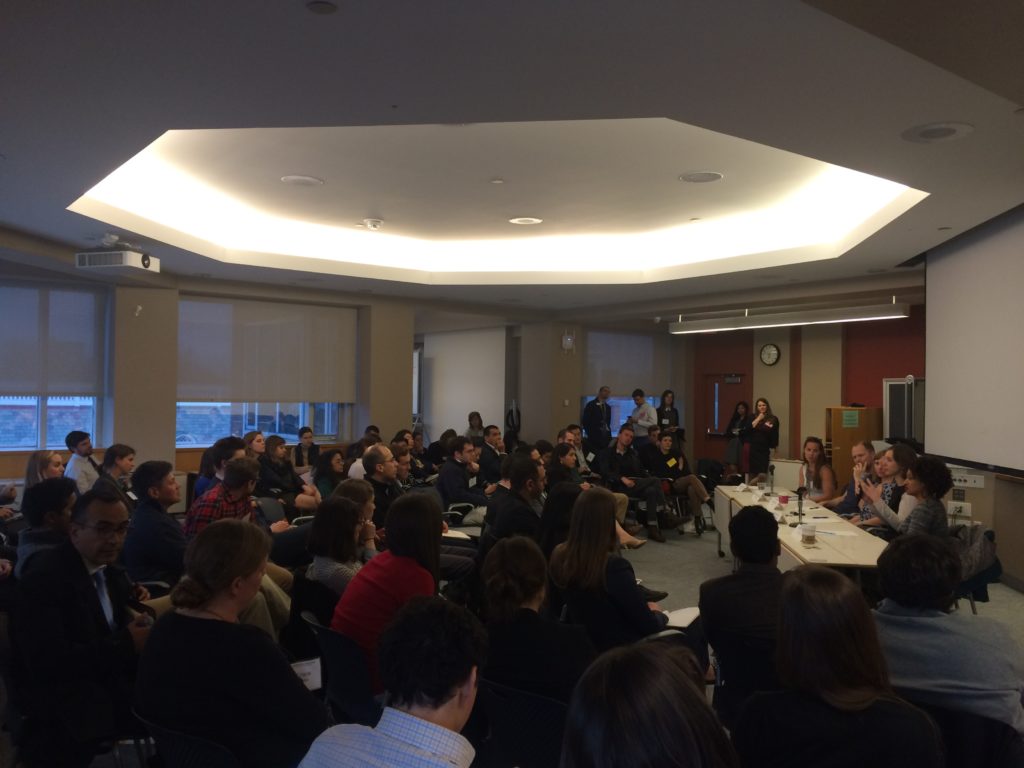 And the receptions continued. Here I am with Keesha Ram – a woman who was also a UVM Student Government President (she in 2008 and me in 1996). So cool. I know we are going to have some good stuff to talk about. She’s on the board of the Institute for Whole Communities (in VT) and also at Trustee for UVM. 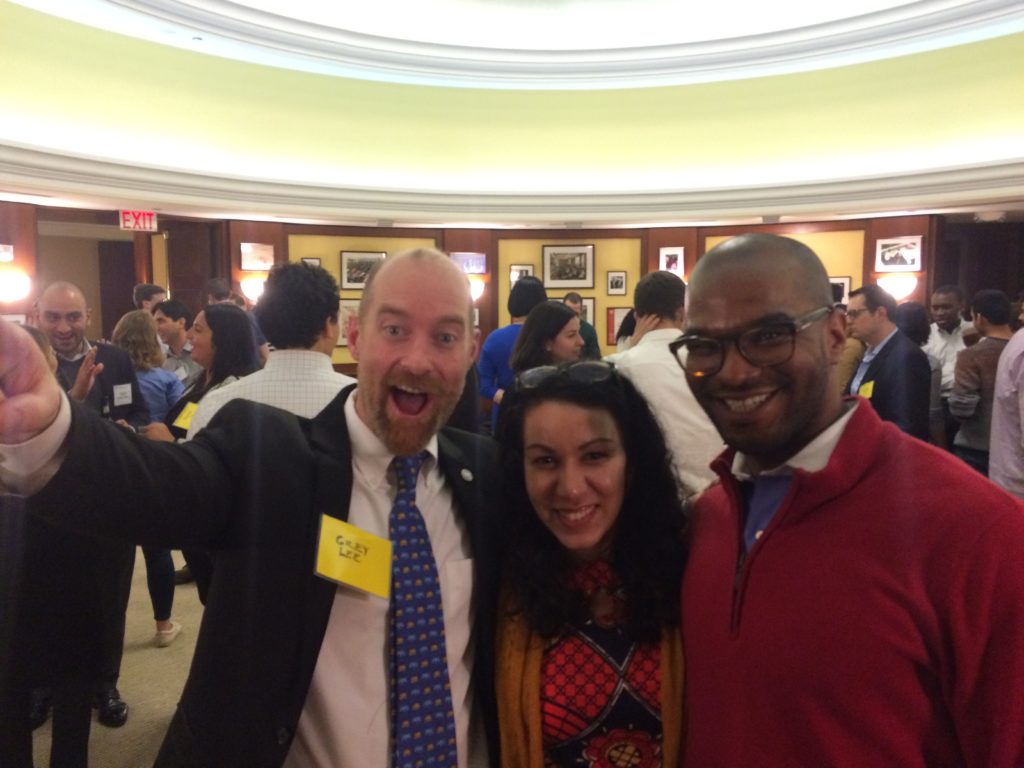 Then, as the reception ran out of beer, we started wondering, where to next? I was happy to step in as a deputized tour director and suggest the one place that you could actually see from the reception, Charlie’s Kitchen. 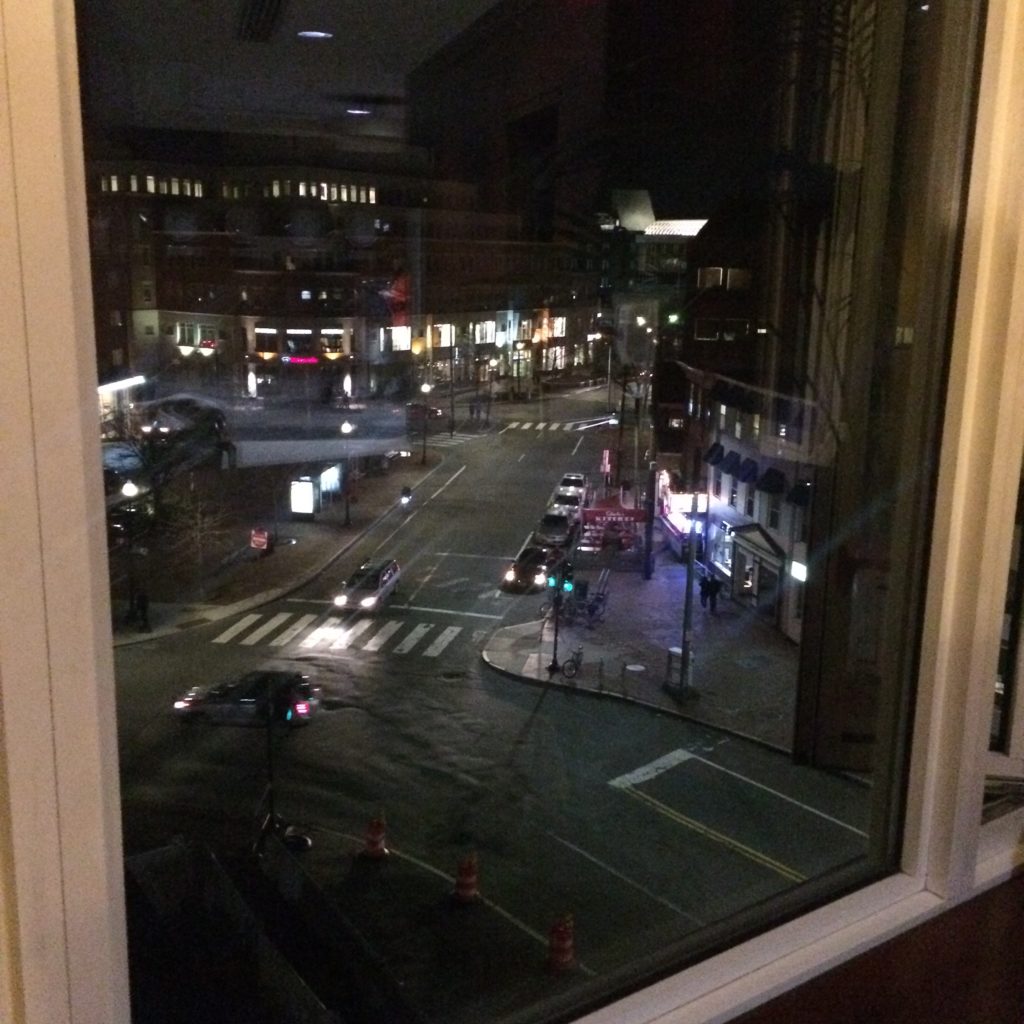 So a bunch of us eventually made our way there. I started out with a guy from North Carolina who sells hot sauce, and ended up with the crew here which included an NYC cop, a ballerina from Montreal, a journalist from Geneva and an officer in the US Army Missile Command…what an amazing mix and I know many good adventures to come!

Watch out, HKS, and watch out WORLD! 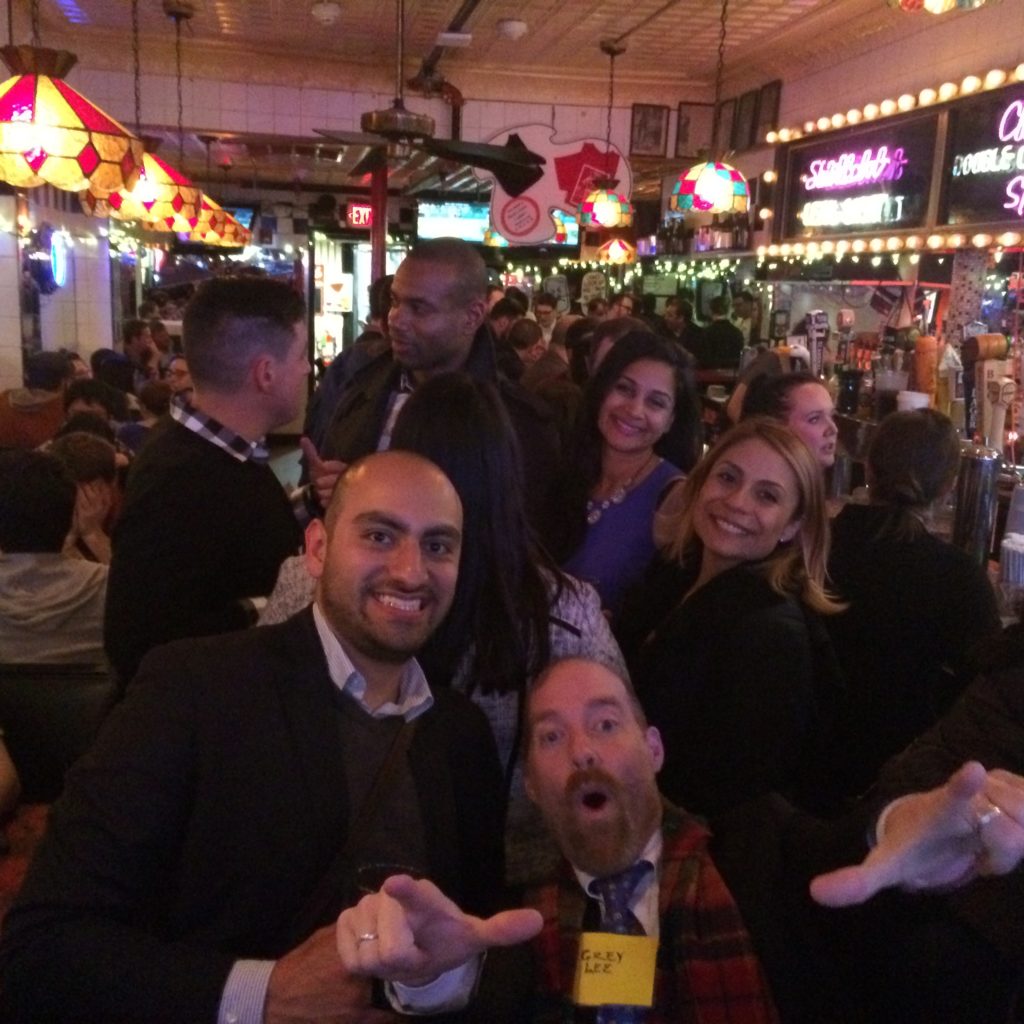