Whew! It was actually kind of hard. A few days in Rome. With Fabio & Raquel. What a couple! And don’t forget João – he is a good kid.

I arrived in Rome and immediately we had to go get ice cream. Mieko, another Burning Man connection, had been cleaning up the apartment (this was a place that Fabio had once lived in, which he had been subletting to various people for the past dozen years, which was now vacant of tenants and in-between renovations…long story). Dean, Mieko’s man, had just arrived from having been in the States for a wedding, in the middle of their “year around the world” trip. We all went out. Fabio gave us a tour of the town from his place, near Termini, to the Pantheon. Then we walked around for two and a half hours. Wow! That was a lot of fun. 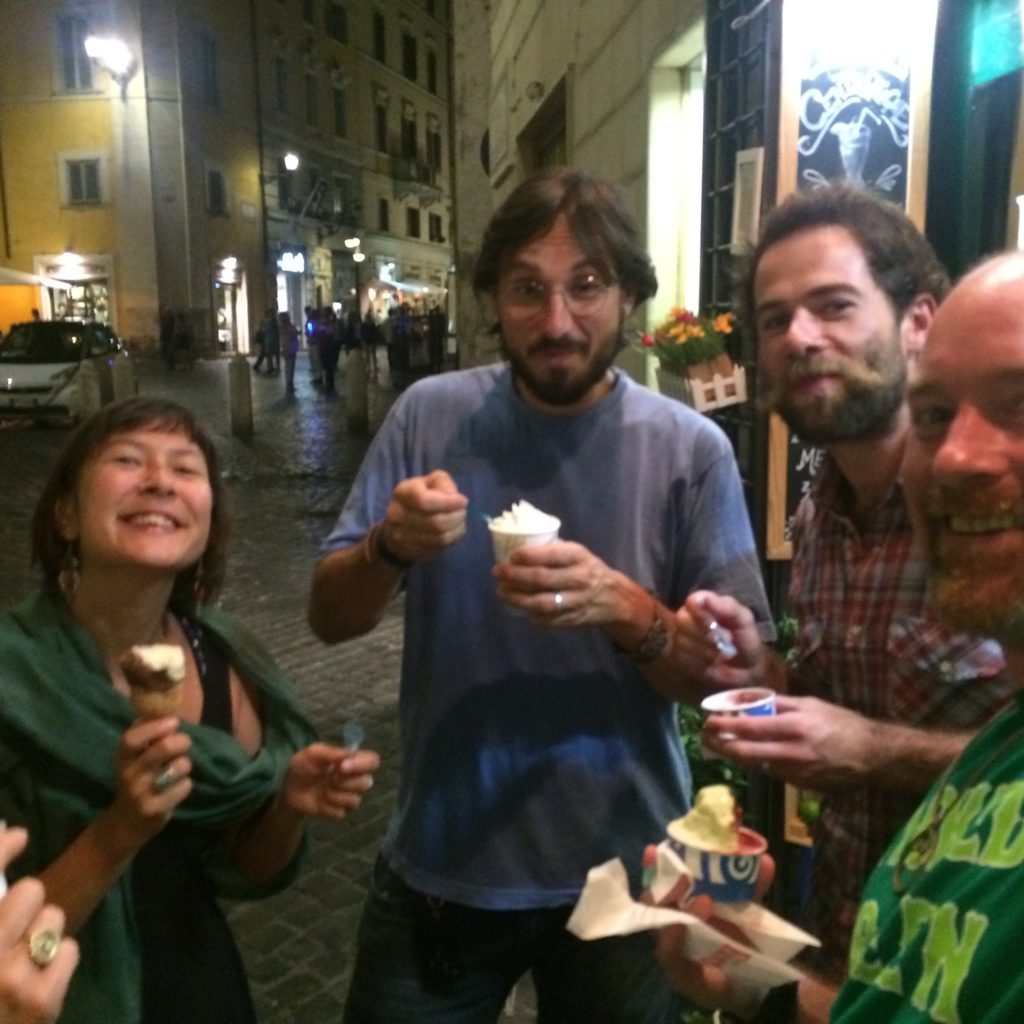 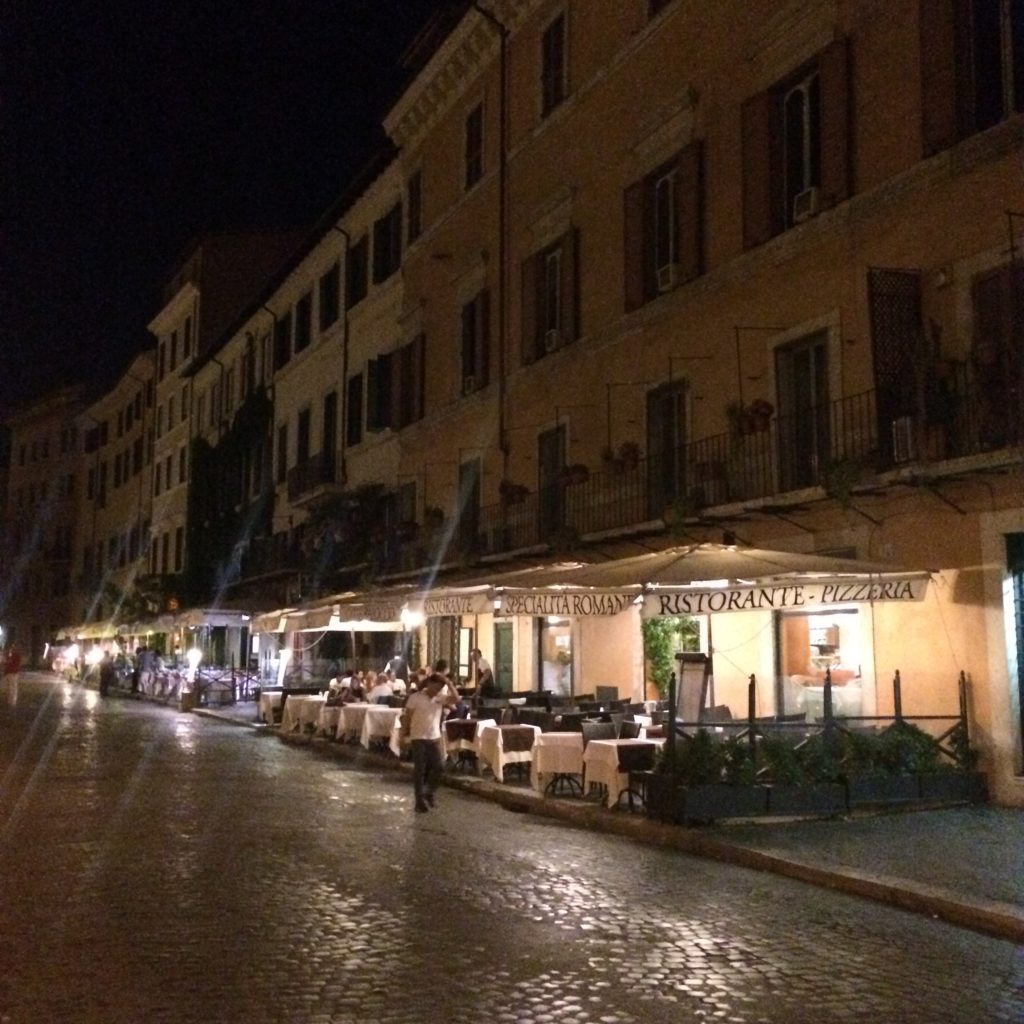 Actually, we had dinner first – then ice cream. This is Fabio, Raquel, Joao, Mieko, and Dean. And me in the awkward selfie location. 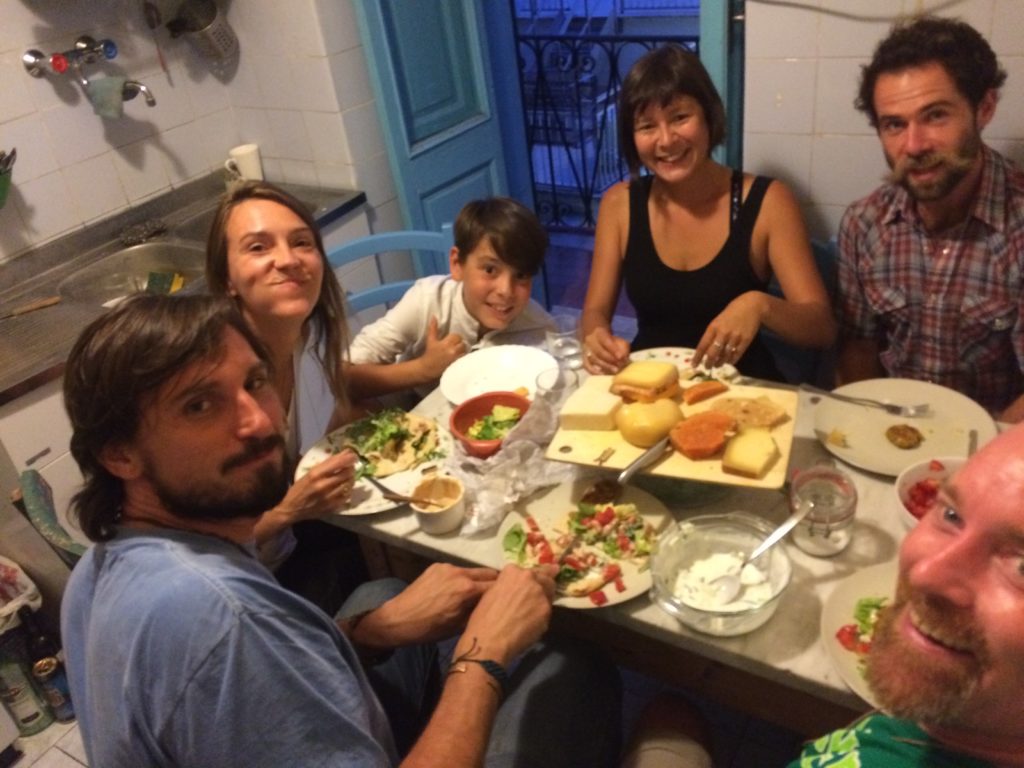 Here we are at the nearby street market – generally excited about things! 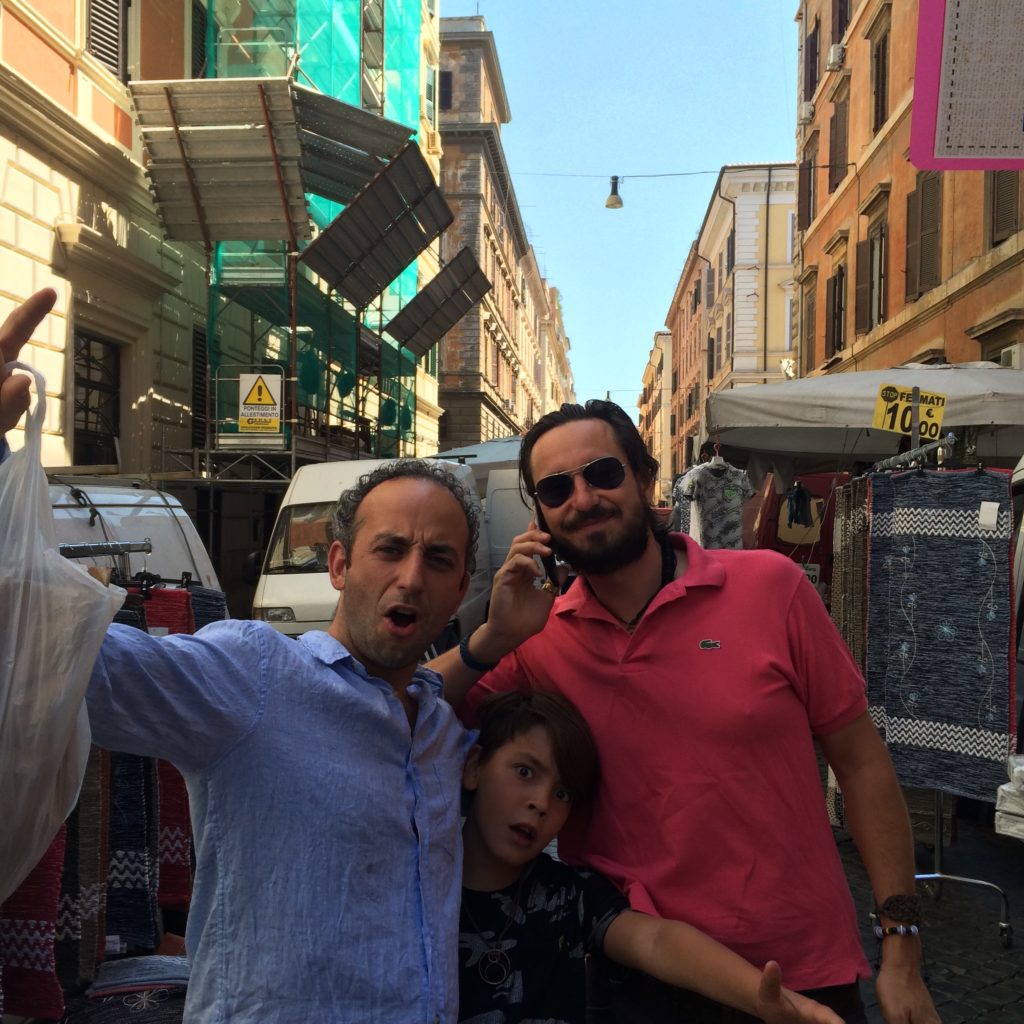 Here are a bunch of the photos. And some choice shots below.

Grey and Fabio getting coffee across the street from the flat – this is every morning. I’m sad I didn’t get the two very engaging barristas who work here – what a hoot! 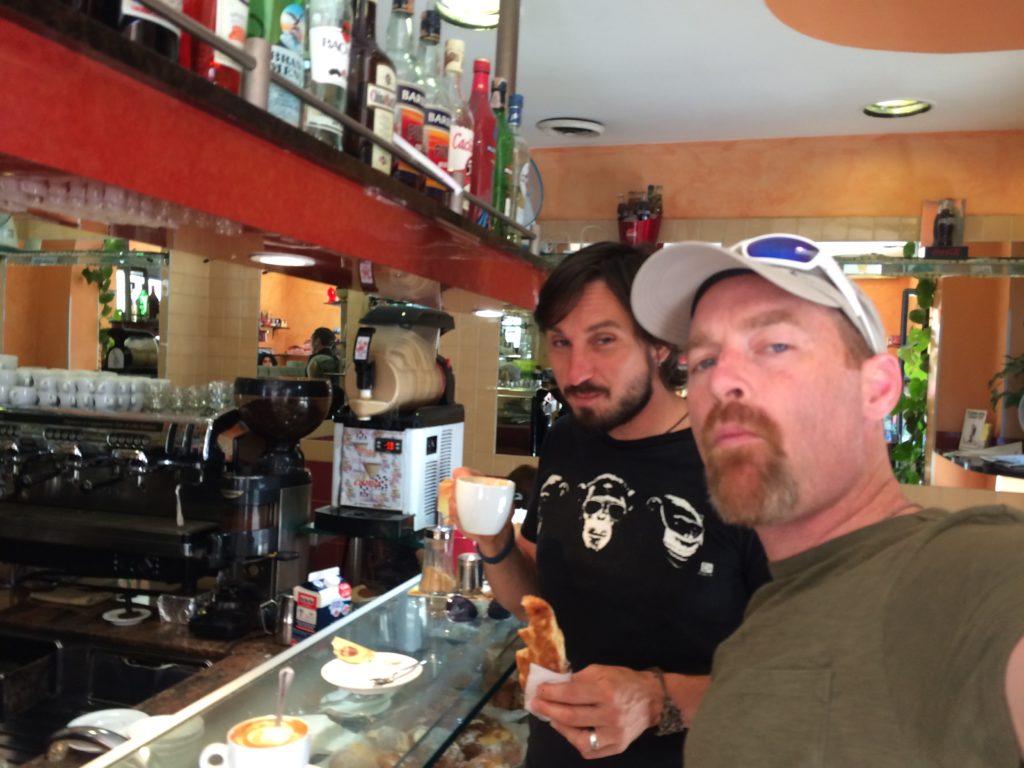 Raquel modeling her Cleu Camp (our Burning Man camp) tatoo, while at the deli getting some supplies for our Todi trip. 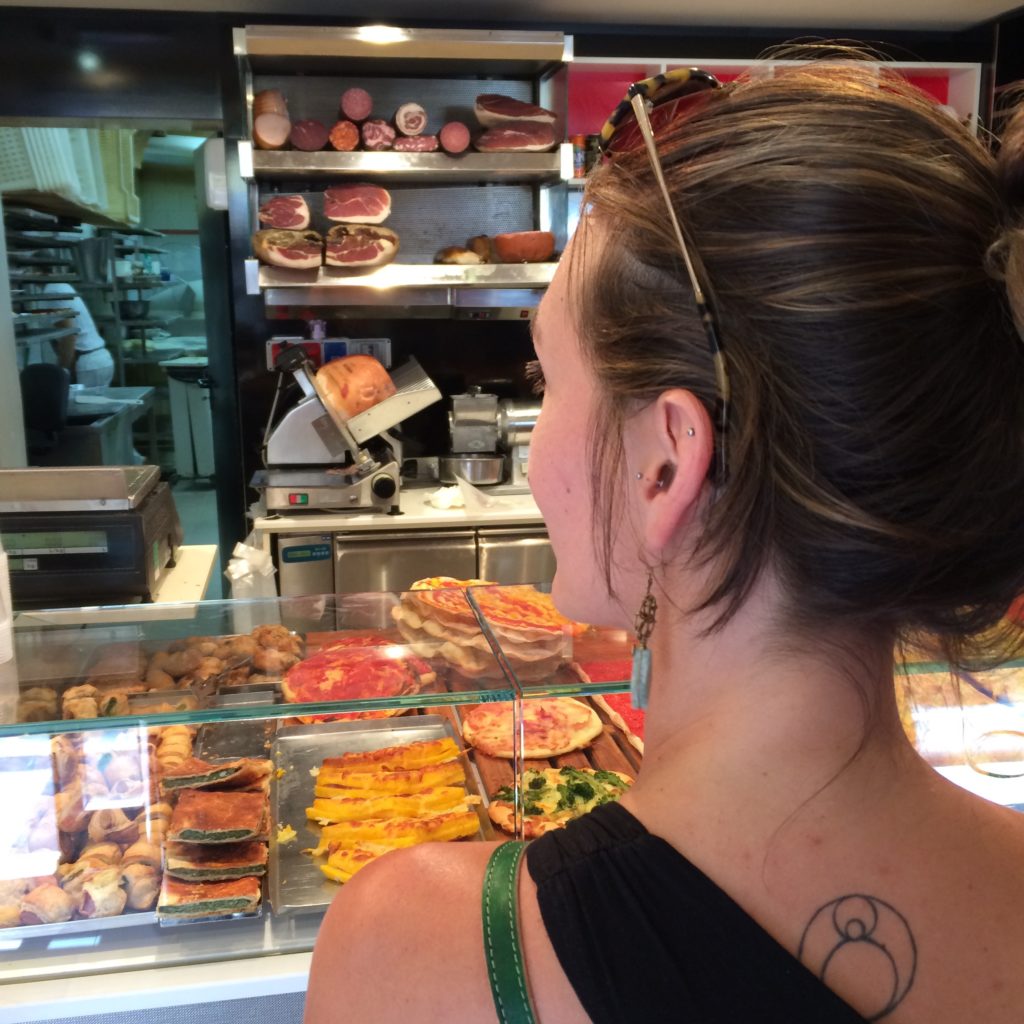 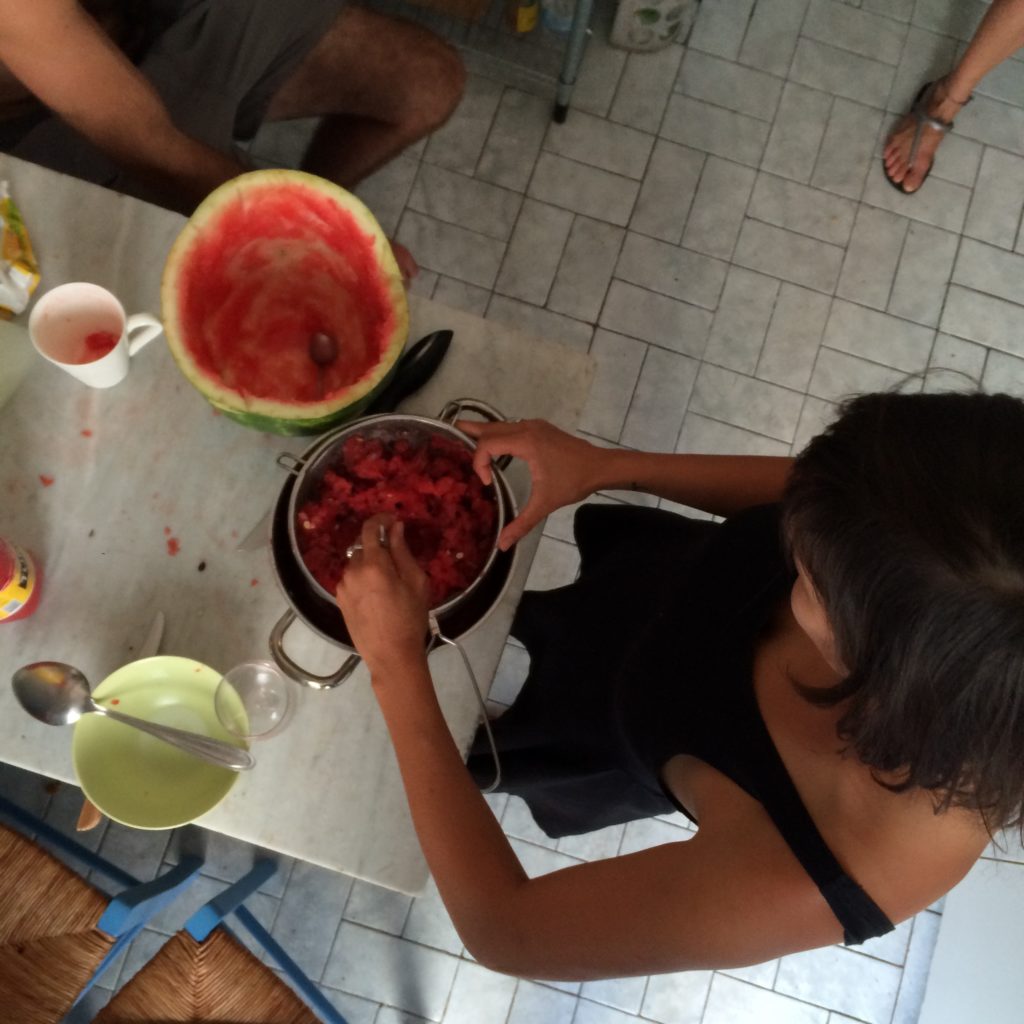 Here is some fun in Rome – a guy trying to clean the crenelations in the basilica of Diocletian’s Baths…it is a pretty big place. 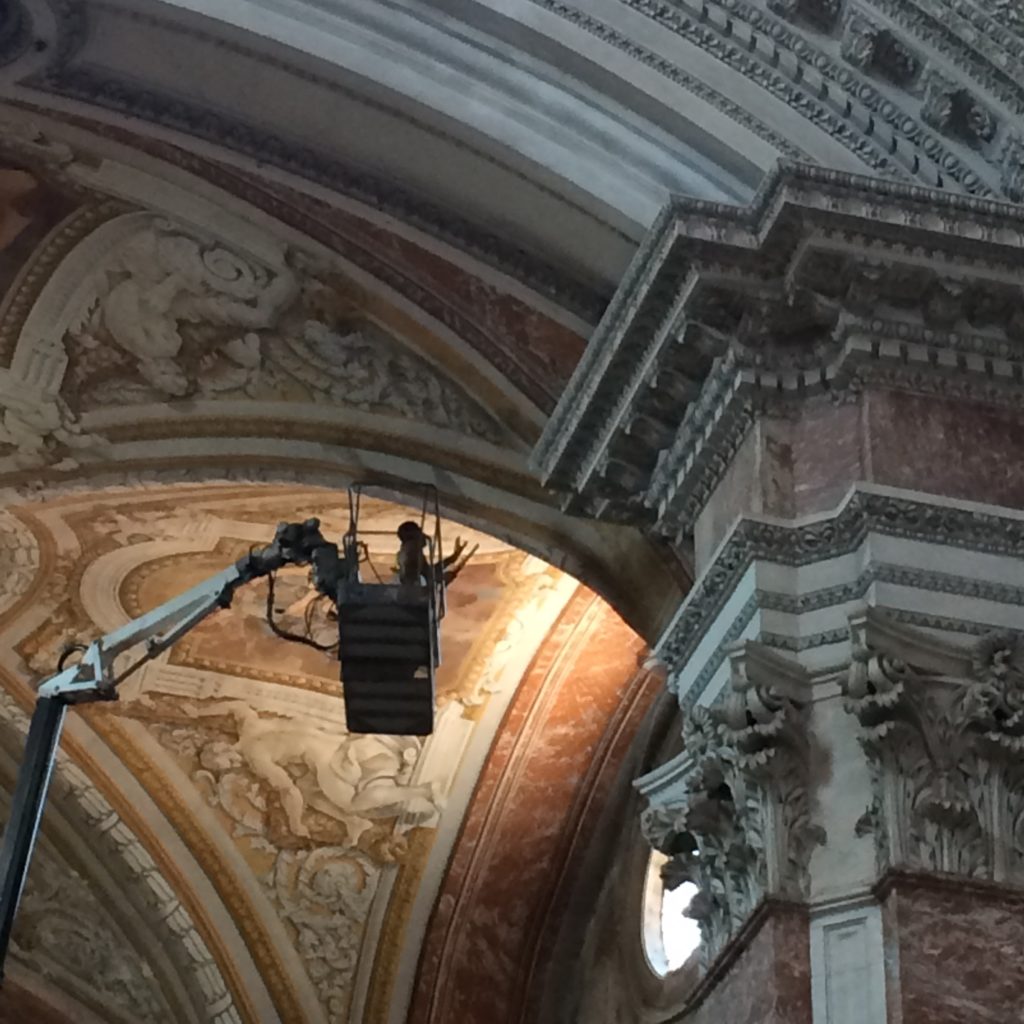 Grey, Danielo & Fabio had lunch at the Teatro Quirino – an excellent spot with great food and books, quite close to the Trevi Fountain but we had the place to ourselves. Really relaxing. Great music. We were able to sneak a peek into the stage to see a modern dance performance practicing. Very cool. 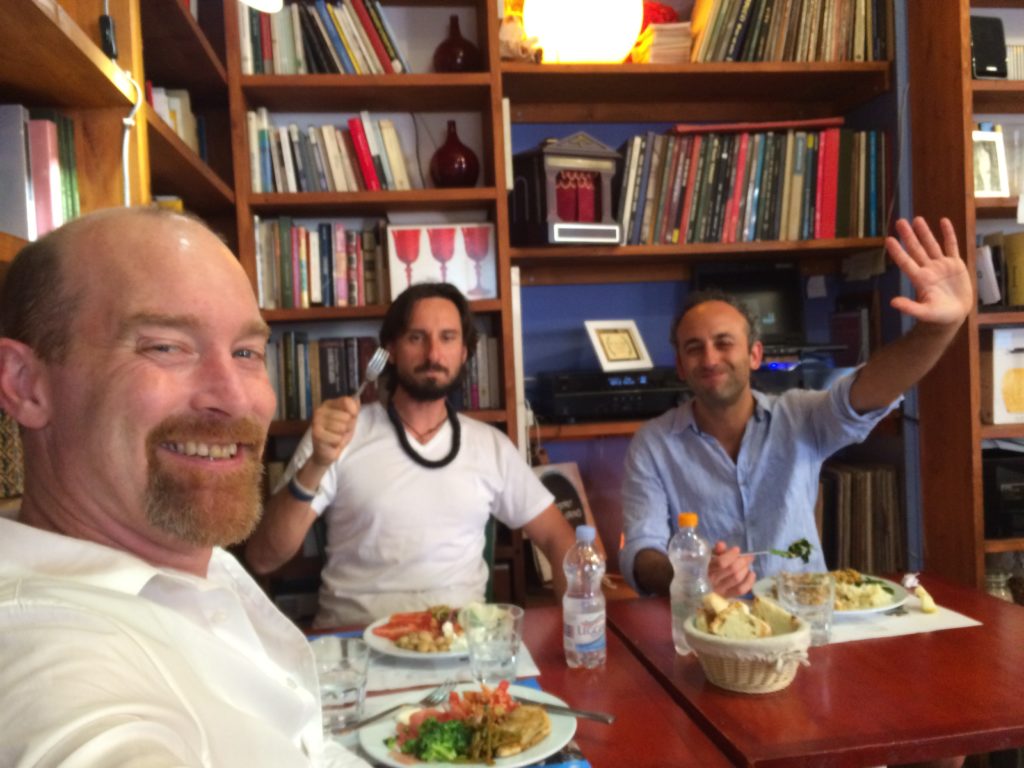 On one of the days, we went to the beach. It was fun! 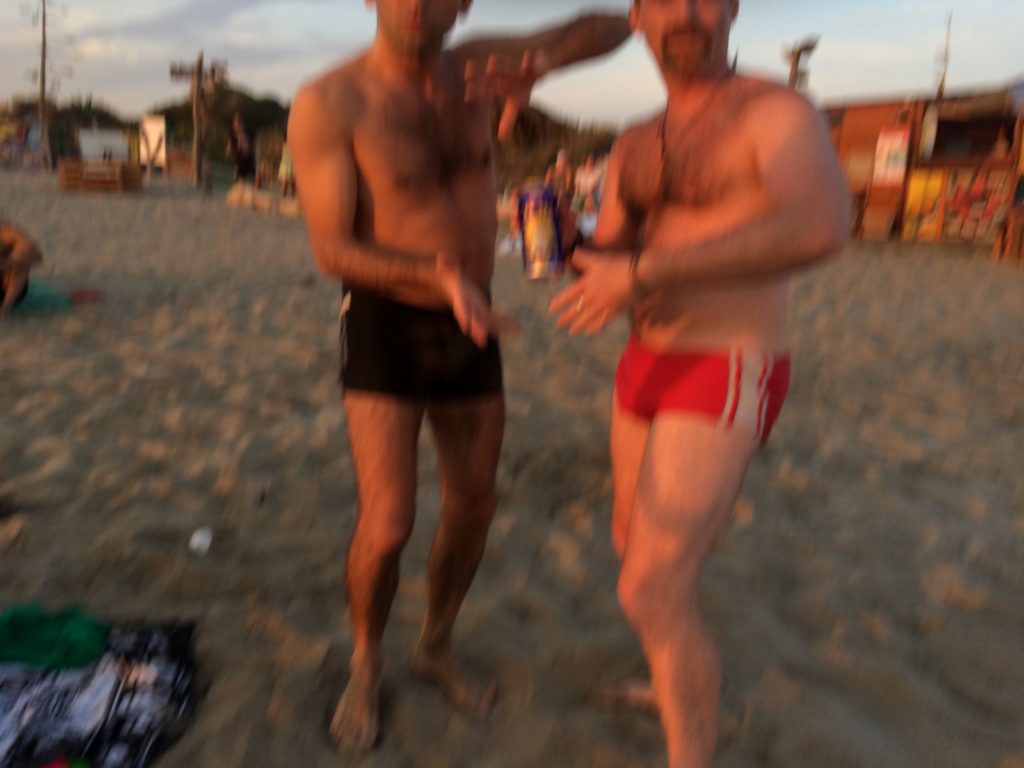 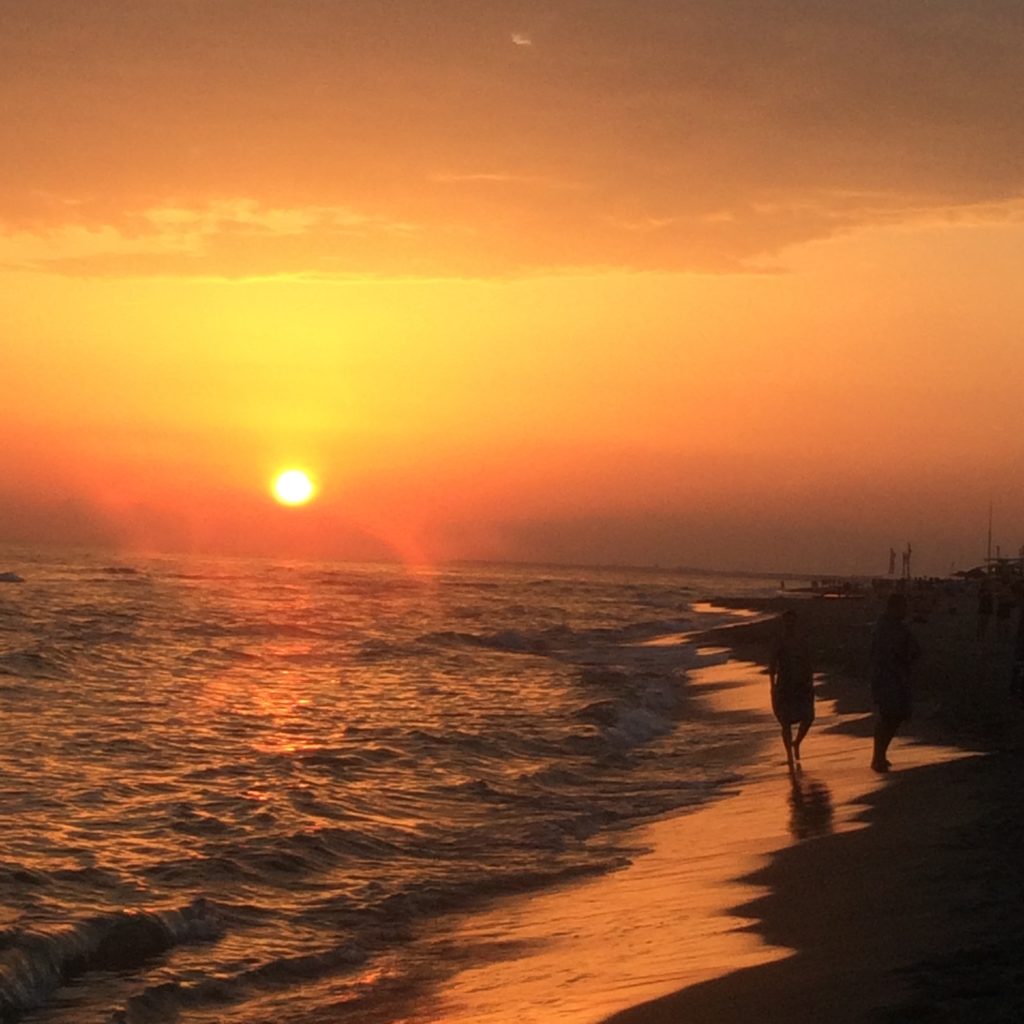 And had pizza on the way back to the City. 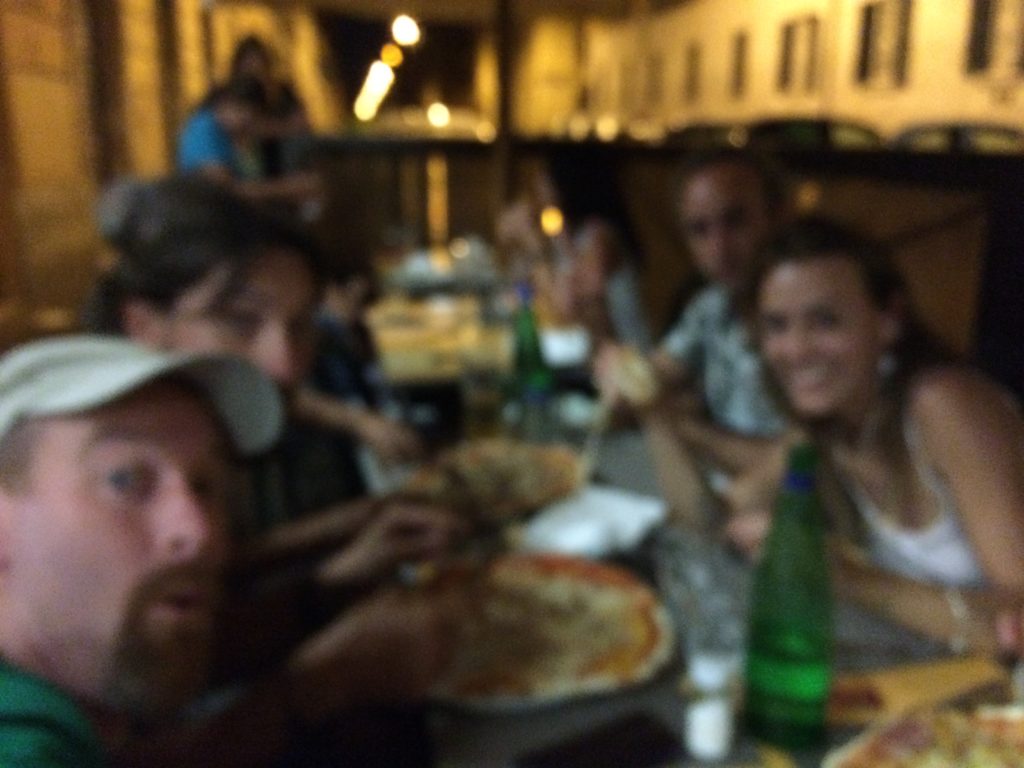 We had a lot of great wanderings – this is just one example from the blog entry about “Sights” – which is almost as good as the one with “Structure” – even though this one about “People” is the best! 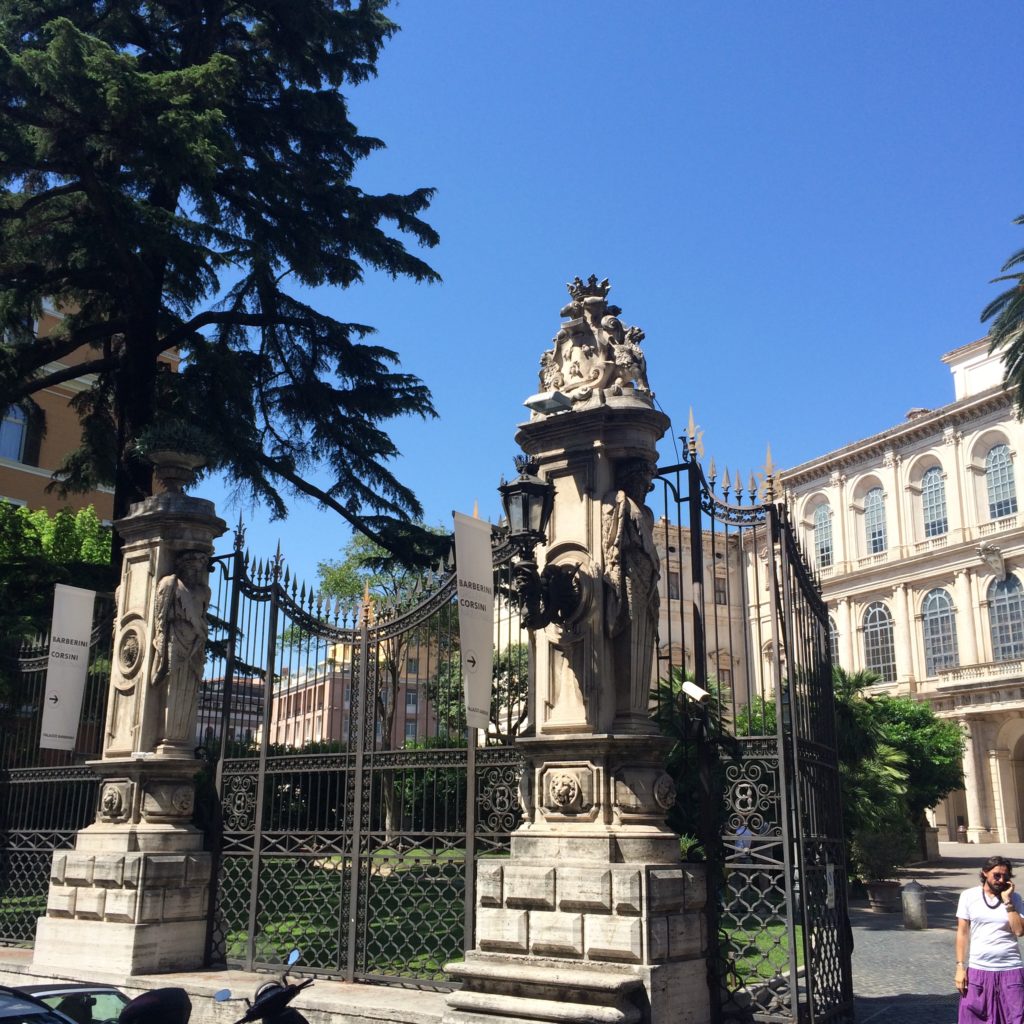 This is us at the last dinner – in a piazza in the Jewish Quarter – all showing off our Cleu Mandalas. 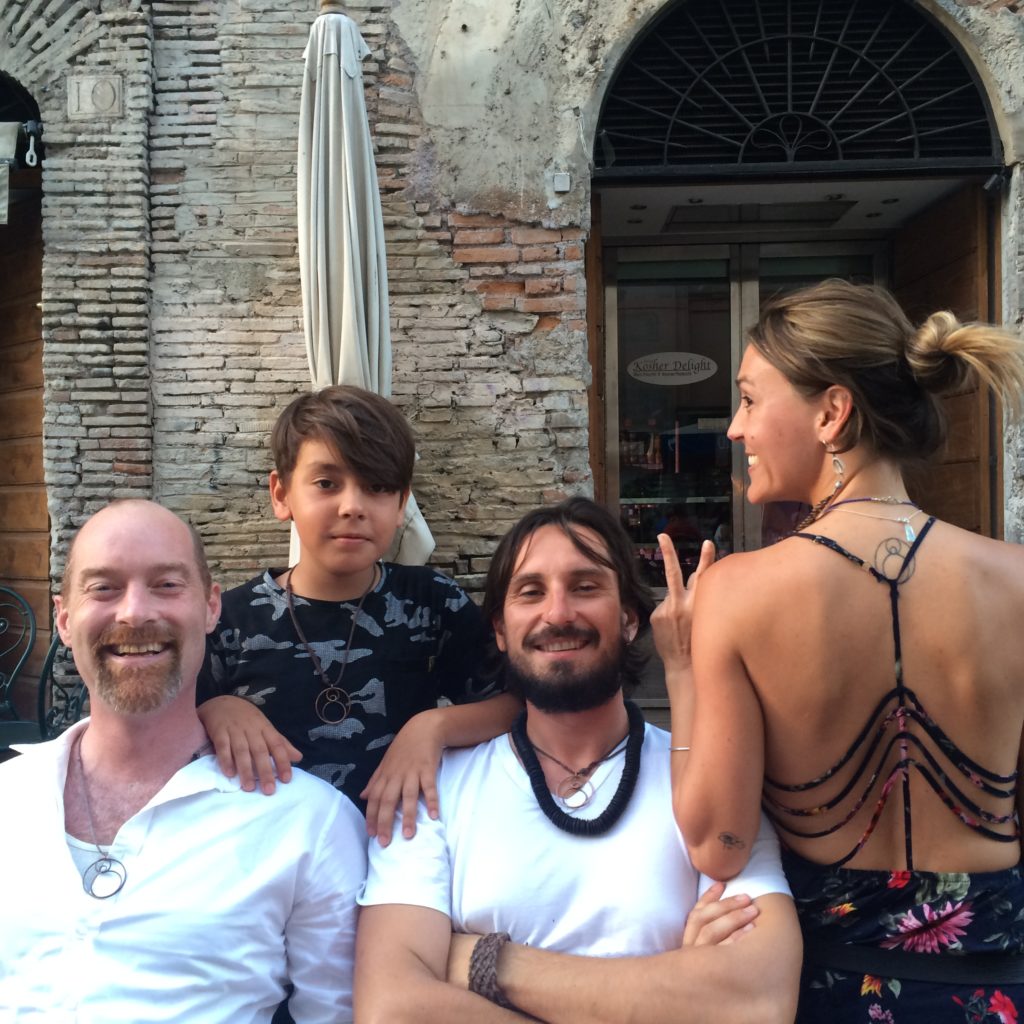 Ah, and here is the two lovelies just doing there thing: 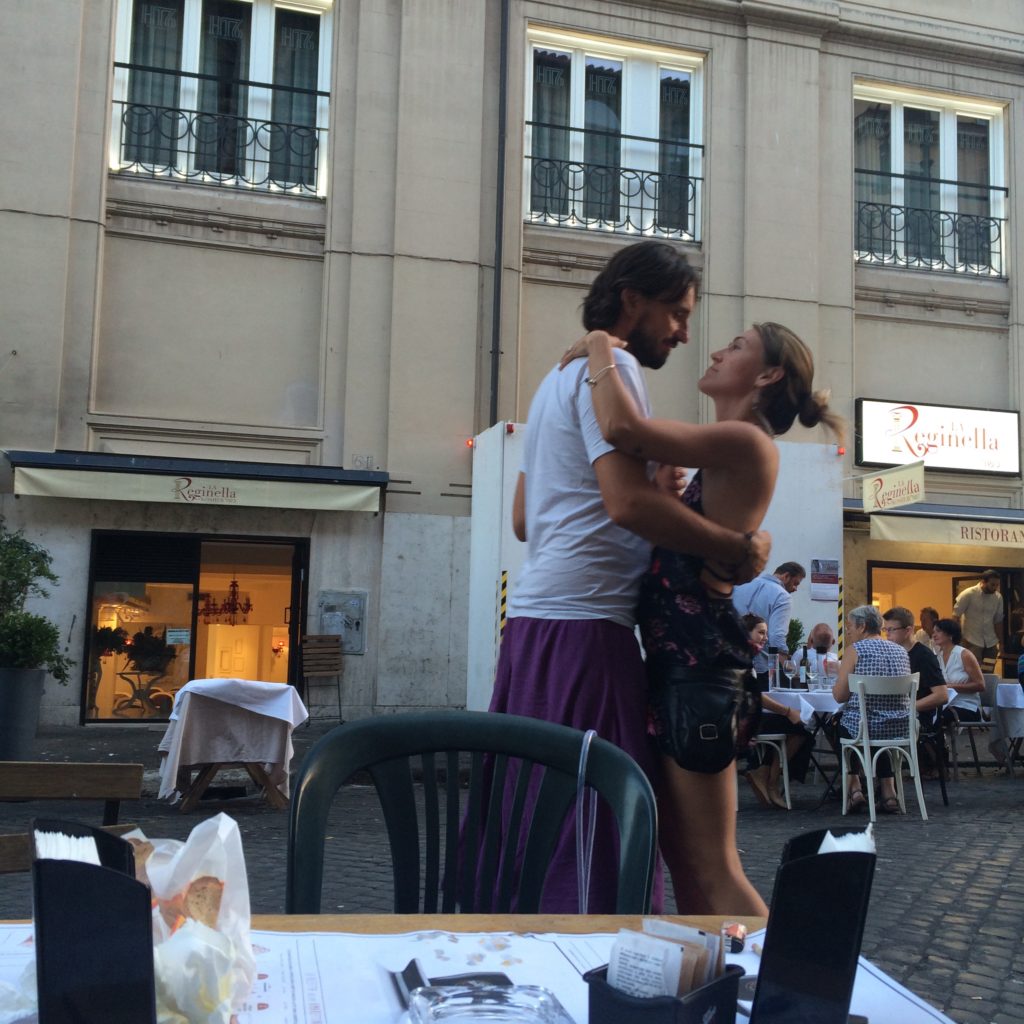 And this is one of my favorites. When we got back from dinner, we were wondering where to park. There is a little street near the flat. Can we park here? Looking closely you’ll see that cars and mopeds are parked in all directions (actually in Rome you are supposed to part with traffic, unlike in Boston, but as is in Cambridge). The street was actually one way heading in to us – so we had to figure out an alternative. The sign was actually placed in such a way that it couldn’t be turned to face the direction of the jurisdiction…but I didn’t get a pic while we were laughing at it. Roma! Always smiling. 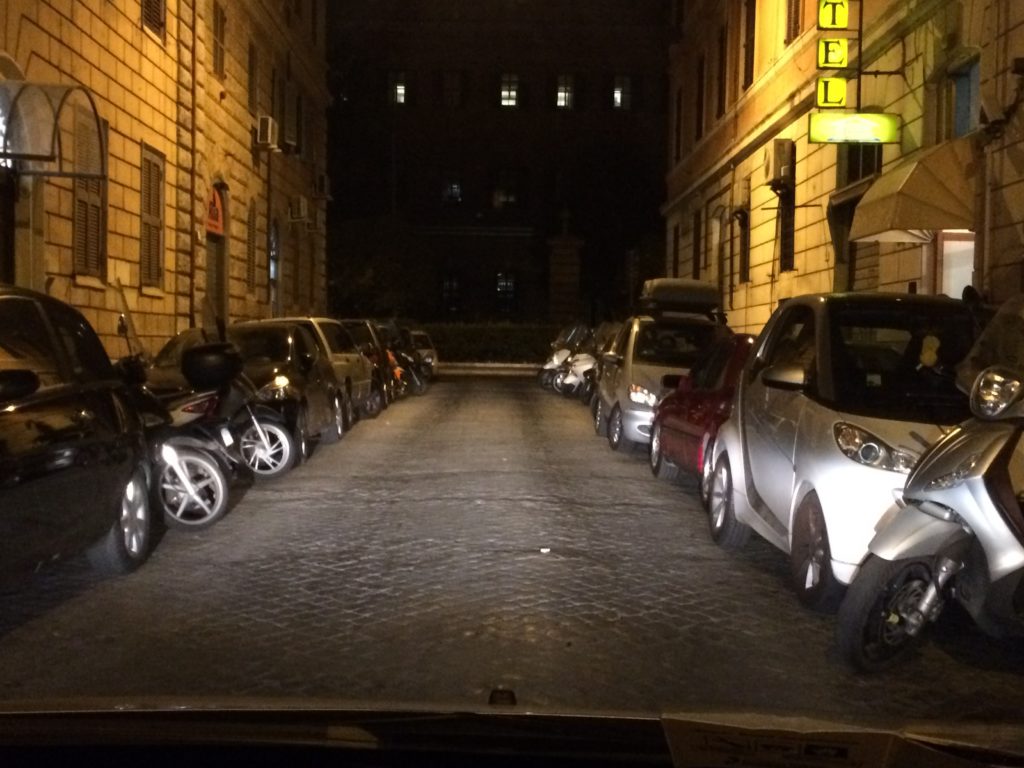